Allow me to explain why I chose to play my next move at a here. I may still be wrong, but I would just like a clearer explanation so that I might understand better. --BlueWyvern 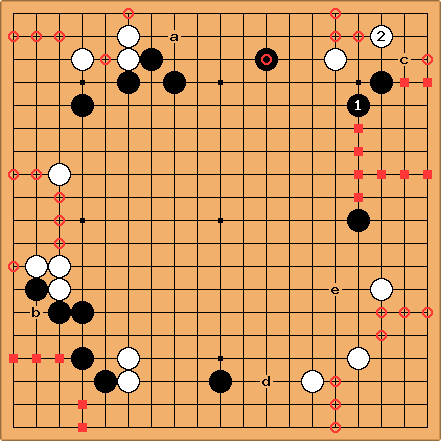 The reasoning behind the move of Black a has a lot to do with me personally, and while another move may have been better, I chose it for the following reason.

I made my judgement based on the shown analysis. This is something I've just recently begun practicing, so I may have gotten it wrong, but it does no good to make a judgement then assume it is wrong during a game. If I did make a big error in analytical judgement, please let me know. :-) For myself I estimated the lower left to be worth about 10 points of unreducable territory, largly due to the endgame play at b.

In the upper left I estimated my irreducible territory to be about 9 points because it is still open on one side. This gives me about 19 points of real territory. White's lower right is massive, I'd estimate about 17 points conservatively, which is almost as much as mine put together (the san-san invasion will no longer work here).

White has a choice of basemaking manuevers in the upper right, I used c in my analysis for simplicity's sake. I put this at about 6 points, and the middle left to be about 6 points as well, which is also conservative given the endgame play at b.

Now we come to the upper left. At a bare minimum, I'd put it at around 7 points. This gives White a total of around 36 points, a 17 point lead.

That brings us to the question of a. A white play at a makes me extremely uneasy. If I play elsewhere and White jumps to a, she can easily make a few more points, pulling her into the lead by over 20. Additionally the jump at a is something that I personally as a go player have a hard time containing properly, so I must take this into account. After the dust settles on the upper side, I'd be over 20 points behind, with most of the prime territory making real estate on the edge of the board gone, where as White seems capable of ekeing out further points with plays like b or d or e, and again, my estimates for her territory were much more conservative.

I'm left with a good deal of influence, however I've just recently begun to use influence effectively and still make some silly mistakes with it. (See BQM20, although it doesn't show it, I handled that situation horribly in the actual game.) I'm not confident enough in my ability to make back 30 or so points just with influence. So I chose to play at a, thinking it safe because I felt a move ahead in the upper right corner anyway.

This decision was guided in part because of a lack of confidence in my ability to properly contain a White incursion at a and partly because I was not confident I could make up 30 points possibly more, depending on my handling of a White move at a, using just influence. 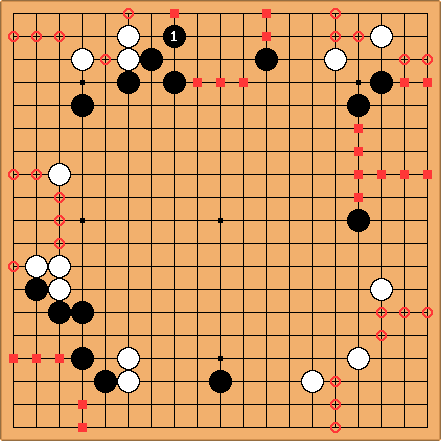 The play at 1 makes me feel much safer. It gives me an extra 10 points of solid territory, eliminates the posibility of me botching an intrusion into the middle of the upper side, and I anticipate making even more territory if White tries to break out into the center, which he does. Now I am only behind about 7 points, and have a solid group up top from which to operate from. I am much more comfortable and happy. To sum up, I believe this move was correct one for this situation, not because of concrete (inasmuch as you can call it concrete) go theory, but rather it takes into consideration an honest assessment of my skills as a go player. It's the difference between what should be possible on the board and what I am actually capable of executing.

unkx80 gives a better local move below. I understand that you don't want to play moves that you can't follow up. I'm not showing you some splendid tesuji requiring a reading ability you haven't acquired yet. No, the move I suggest embodies a fundamental concept: avoid getting fenced in = fence in your opponent. 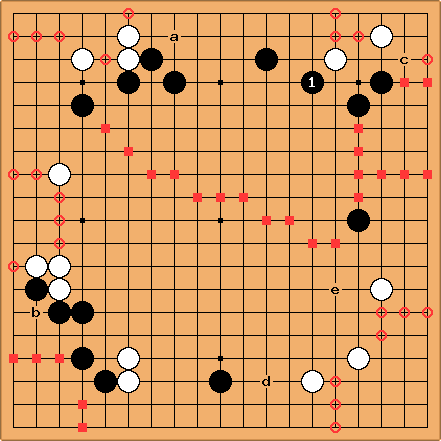 After Black 1, White has to live locally in the corner. Her escape routes are blocked. Black's upper side and right side are virtually connected. At the same time Black builds influence in the center which stretches as far as the squared sector line.

Whatever your strength is, there is no reason to ignore the fundamental principles of Go. Only when you do, you'll have to fight with an ability superior to the one you have available at this moment.

I think Black a is very slack. In this local situation, Black should play at 1, this applies much more pressure on the white corner than a. Also, there is no need to be afraid of White making the hane at b.

No matter how you look at it, your move was simply too small for this phase of the game, it's just a few points of territory. Likewise, the white jump that you're afraid of is also a small move. White might take away your territory, but your position is also strengthened quite a bit.

unkx80 already gave what I also think is the largest move in this situation; I will give you two alternatives of the 'cannot be too bad either' kind. One is to play at c in the diagram. After that move, White will not have an easy time living with his two stones. She will probably have to put pressure on your marked stone, thus allowing you to strengthen it in sente.

On a good day you might either force it to search eyes in the center, or be able to close off the center (as unkx80's move does immediately) as well. A second area of interest is on the lower side. There are two potentially weak groups there: your single stone and his two stones. If you play here first, you have a good chance of starting an attack. If White plays first, most likely you will live without any additional benefits for either. -- Andre Engels