Hello. I recently played this game as White. The situation in the upper right resulted from my opponent making a 3-3 approach to my mokuhazushi stone. The invasion with the marked stone seems unreasonable. Is it? And should I try to kill it? It seems like any group living in this area is completely erasing any influence I might have built up. --BlueWyvern 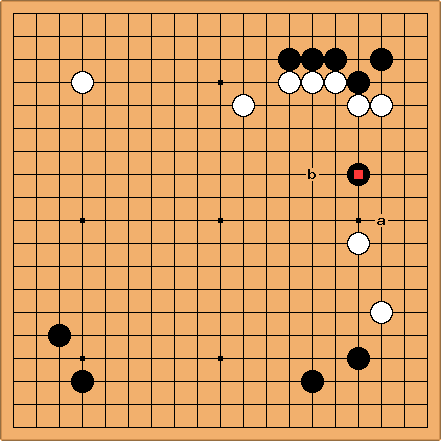 HolIgor: This kind of invasion seems to be premature, but it is not easy to kill the marked stone. However White can get good results attacking the black stone.

Don't worry about the influence of the wall. Right now the wall is doing its job perfectly. It helps you in the fight.

It might sound like a paradox but using walls for encircling territory is not a good strategy. The territory turns out not that big. The influence should be used for a fight and in this position it is actively fighting.

Since you have a nice wall the attack should be directed from the other side. You will reinforce your two stones that are currently cut off.

If Black tries to pull out this stone then several next moves he won't be building territory while you can make territorial gains with each move. However small, they will add up.

One of the plans of attack can start with taking a possible base of the opponent playing at a for example. Capping the opponent at b is another great possibility, but in that case you leave more room for him to survive.

BillSpight: White should drive Black towards the wall. White 1 is perhaps the strongest attack. 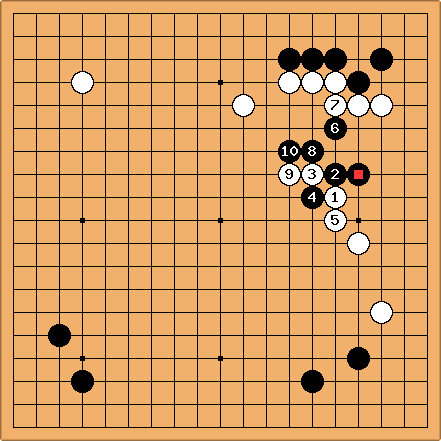 Black plays 4 as a sacrifice to get some aji for running. 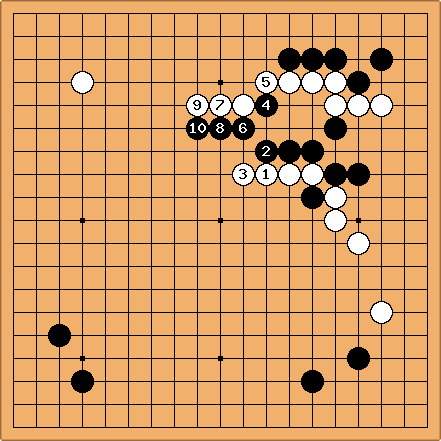 Black uses a threat to cut off White's wall to make his exit, but White "crawls" on the fifth line. 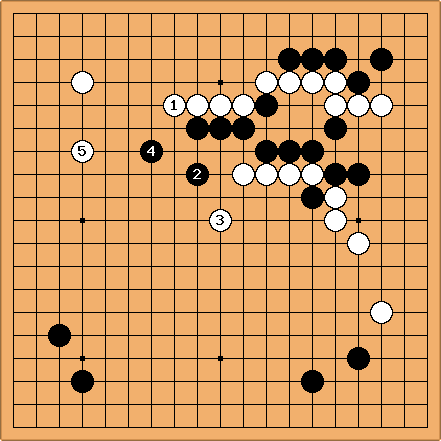 White keeps up the pressure, building both thickness and territory.

This is one variation, no guarantee of correct play. ;-) It is also possible to sacrifice White's original wall for a huge wrap-around wall. 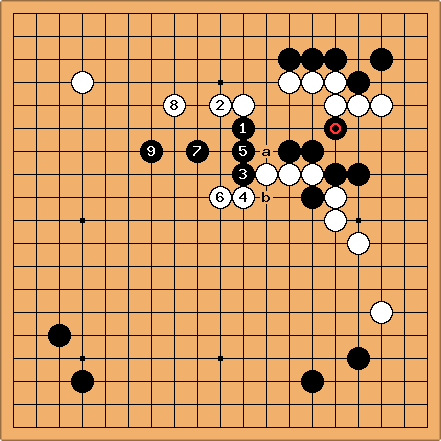 Given the marked stone, can Black play 1 here? White cannot cut through the gap at a. If something like the diagram follows, the White upper left is still open and the Black cut at b remains. 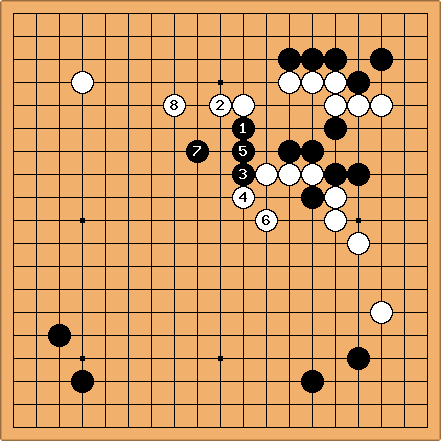 AJP: Is it urgent for white to respond to

? This stone can't easily settle on the right, nor is it clear to me that white can really gain a lot by attacking this stone at this time. What if white just takes a big point with something like

, which works well with white's upper-left hoshi and wall on the top right? As the game progresses, white waits for

to get into trouble in the natural course of events. I also wonder whether, in response to a white play at a, black will obligingly make

heavy with a play at b, or whether he'll try for some sabaki with the kakari at x and aim to keep

light and flexible. I would be more inclined to respond directly if the

stones were less strong, such as if they were three spaces apart.

Alex: I think tenuki would be taking it too easy. Letting Black jump out to safety negates White's influence around here and may result in White's wall coming under attack. If White's wall was truly thick, I could see your point, but since it has cutting points and no definite eyeshape, I think attacking is necessary in order to induce Black to help White settle her shape by making forcing plays against it. 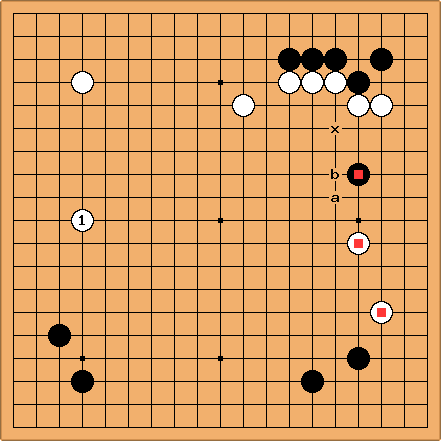