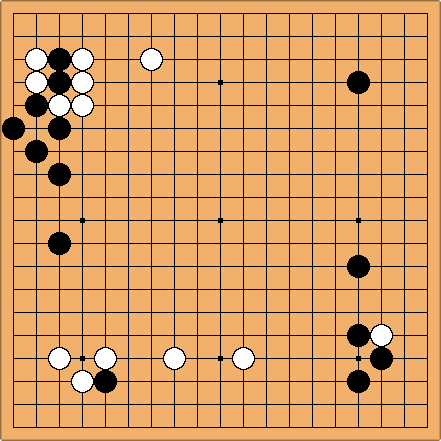 How should Black play? 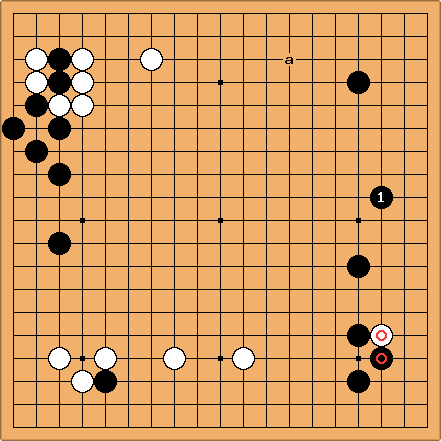 Bill: I am not sure where to play, but I am leaning towards

Because both sides are strong in the top left, both the top and left sides seem relatively unpromising, even though the top side has the widest gap.

exchange the bottom is hotter.) A direct invasion may be better.

But before that bolstering Black's moyo on the right seems better, as the gap is not small. Given that, where to play?

has the virtue of stabilizing Black's position on the lower right. Playing further away just invites an invasion. The top right corner cannot be stabilized in a single move, anyway (that you would want to play).

Interesting, i IanDavis too am tempted by keima, but would be playing up at a to try and get into the last big open space and also stabilise the corner.

Bill: You have company. Black played at a in the game.

Alex Weldon: I would have played one line to the right of a. You see both the ogeima and keima enclosures from hoshi in high level games, but I'm never sure how to choose between them. I guess my reasoning here is that W is strong in the upper left, so extending further doesn't reap much advantage, influence-wise, while it makes the corner thinner. However, I suppose that with Black's formation in the lower right, invading the corner directly isn't a good idea for W anyway, so maybe the ogeima is right.

Rich: As a mid-SDK, I'd have played one to the right of a too, for much the same reasons. White will come under attack if he enters the gap, and black can build up on both sides.