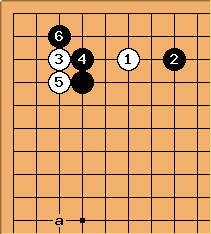 hane here is probably a special plan, for example if Black has strength in the direction of a. This play looks for more territory, but the white pincer stone remains as a more serious problem; so Black cannot claim a thick position. 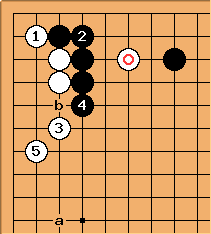 One variation from pro games is this, with

at the key bulge point.

is for immediate life, leaving Black to worry about

at b is not joseki, see 33PointInvasionQuery1.

tenuki is also seen here, with a different feeling. 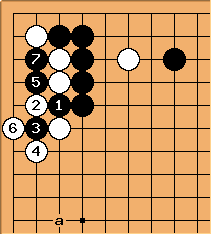 Here White makes a ponnuki, and has sente once more.

Velobici: can White tenuki at this point? Assuming a black stone at a (as we assumed in the first diagram), it would seem that White must immediately play to support the four stones that comprise the ponnuki.

aLegendWai (9k? KGS): It depends on the rest of the board. If B stone at "a" is weak, it may be ok to tenuki (play elsewhere). If not, it is very urgent for W to play towards the centre before B enclosing the chance. 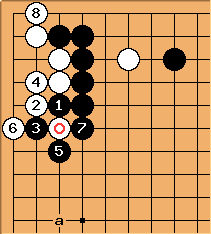 aLegendWai (9k? KGS): Correct me if wrong.
I wonder if W will play as suggested when there's a B stone at "a". If B stone at "a" is weak, it may be possible. Otherwise the influence of ponnuki may be greatly reduced, not to say W is not safe at this moment.
To avoid this, there's another variation.
Note:
-

by a ladder. If there's a W ladder breaker, B is in a disadvantage (Then B should play differently instead!).
-

contributes to a living shape. - W live in the corner, but it gives B good influence and thickness. 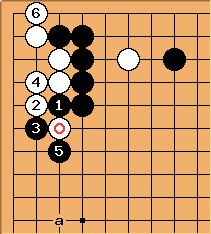 This is also possible (and better to me ^-^). W lives with its good threat of

(which W can make use of it).
Later, B has to capture the

when a W ladder breaker exists. If B forgets, you should know what to do. ^^ 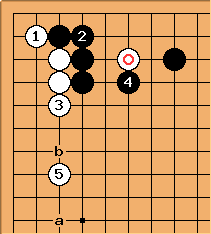 Assuming no black stone at a, White can also play steadily with this

, leaving the question of the aji of the marked stone for later. Black may be able to take sente, but White shouldn't omit

because Black b is severe.