Here is the first sample of Beginner Game Samples To Comment

I am a beginner and try to learn on my own. Here is a game of mine against computer (gnuGo 3.2) with my comments. I would really appreciate if you spend some time and comment too. Orcun 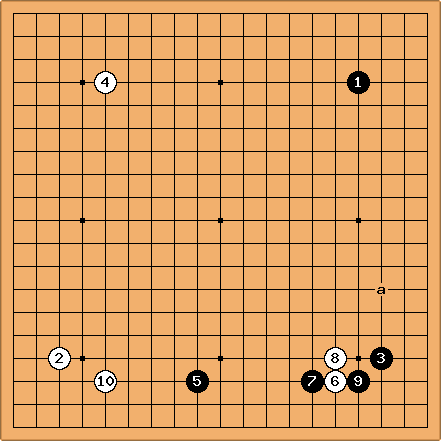 : Orcun I don't know if it is easy for the computer but still I wanted to play on the upper right corner :)

mAsterdam It is a good custom to do so, and this one is played a lot.

: Orcun I didn't want just to defend my corner, but to connect with

is too close. One point to the left would be quite good, though: a close pincer. Two points to the left, even better.

Andre Engels The shape of

is one that one should avoid (with black). Standing with its back against the wall like this, the black stone is not able to exert its strength.

: Orcun I guess it is a big threat now. I am not sure about my response.

Charles Matthews Wrong idea. Extending to a instead will keep the corner out of trouble. Don't provoke damaging plays on the second line:

From a human point of view,

here, which then weakens Black on both sides.

: Andre Engels This feels like a bad time to play tenuki. 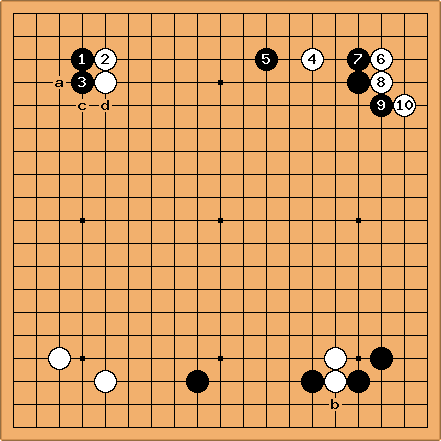 : Orcun It is my turn to attack, besides I didn't want to play on the sides soon since I already had one.

in the previous diagram; black a would be the normal move here. 'Attacking' is not the word I would like to use for either. Black b in the lower right looks big.

: Orcun I thought the response would be

, so I was surprised. Well maybe she (my computer didn't want me to direct to so seems my corner on the upper right.

: Andre Engels This position in the upper left corner should never be left alone. The difference between white c and black d is simply too big.

: Orcun This , I guess, is definitely not a good move, Since It is not my cormer yet and I face a white wall on the left.

Andre Engels Apart from the remark above for

, this move is perfectly acceptable.

: Orcun She claims her corner and I accept it but I don't want her to connect with

at a is considered better.

: Andre Engels I always say it's a good sign when people make this mistake. This should be the first move that comes to one's mind in this shape (Hane at the Head of Two Stones), however in this specific position (with

on the board) it does not work. See 4-4 point one-space low pincer invasion, interception for a discussion of this move.

: Andre Engels Bad move, now black gets what he wants. 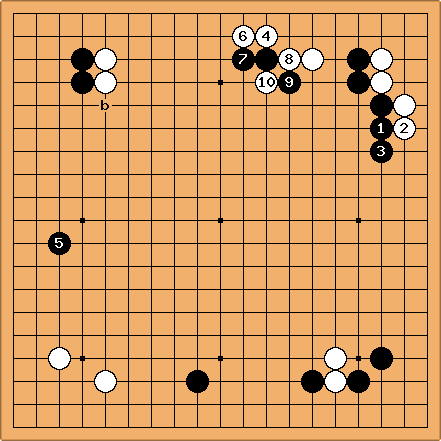 : Orcun I thought she was on the losing line and wanted her to continue.

: Orcun I couldn't find a good response, maybe the right one was N17 ( I am sorry, should be

). Maybe I should have attacked first?

Charles Matthews From the point of view of power,

must be at b (Hane at the Head of Two Stones).

Andre Engels Please use letters rather than coordinates for specifying points. N17 is

, which is not a good move here. Locally

looks correct, white is just creating a weak group for herself. Globally, Charles is correct.

: Andre Engels Inconsistent. After not answering

, black should do better not to answer

either. The black stone is very light now; black should have no more worries about giving it up than he has about giving up some empty point. 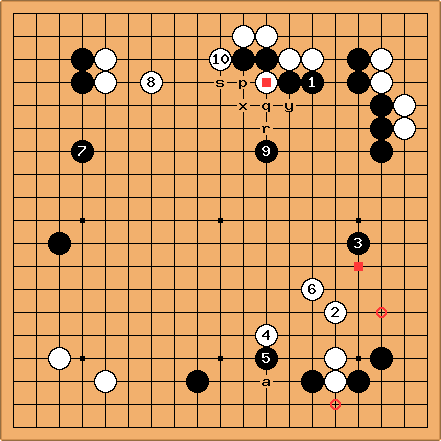 : Orcun I don't know why I was happy about this situation but I was.

: Orcun She started to play for the middle slowly but I was not interested so much. This was not concentrated for both middle and side play. I think it did not do any good for me at all. One place lower the square seems better now.

: Orcun I knew she was after the middle but I should defend my side.

Charles Better: either play a quietly, or connect under at the circled point.

: Orcun Again I was not sure so I played far away. Why

? I thouht the fourth line was my winning line.

How would you rate this position?

Andre Engels Agree; the greatest worry seems to be the lower right - you might well be shredded to pieces there.

: Orcun This may not seems good but it was a two purpose move. I wanted to attack on the squared white by p and I was jelaous about her influence on the middle.

Now I ask myself Why didn't I consider s? Maybe I was excited about my? idea of double ladder which goes like black starting p, white q, r. Then white should play x or y otherwise one black stone there would create a ladder. When white plays on one side, I should continue as if it was a ladder and in the end I would have two ladders. Now I can see where I am wrong! 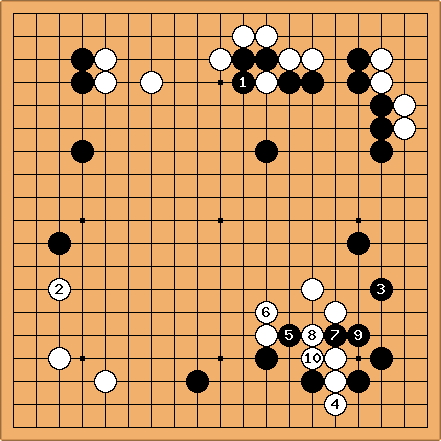 : Orcun I wanted to respond in a similar way but now I think 4 should be mine, as she teaches me next.

make territory while connecting, but

connects the weakest group and is therefore better.

: Orcun I wanted to play

so I thought this be a good sacrifice (which is my style in chess). 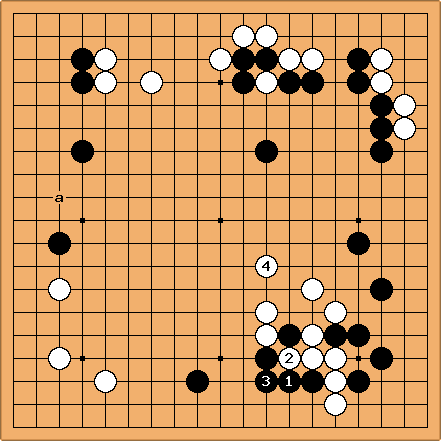 : Andre Engels Terrible move. What were those silicon cells thinking? So close to her own thickness this move hardly has effect on the game at all. Charles Sadly, even female computers are stubborn about accepting criticism.

What do you think about this situation?

Charles Black seems to be a little ahead; White should probably invade at a to fight.

Remember I am playing go for two days and gnuGO 3.2 is a product of four years :) How do you rate my strength for the time being? What about my learning curve?

Orcun I could not load the game to continue. So I started a new one, which will be the second sample. I don't want to post all of my games but just two is ok I guess. It would also show my progress if any? :)

iopq: You don't know computers like I do... they are all about the end-game. They don't see beginning moves clearly because there are too many legal moves. The computer would crush you in the end-game though. I mean, you'd probably lose like half of your groups. It happened to me... damn that 12k computer strength