Here is a problem from a game I just played earlier today on KGS the Kiseido Go Server. I had Black: 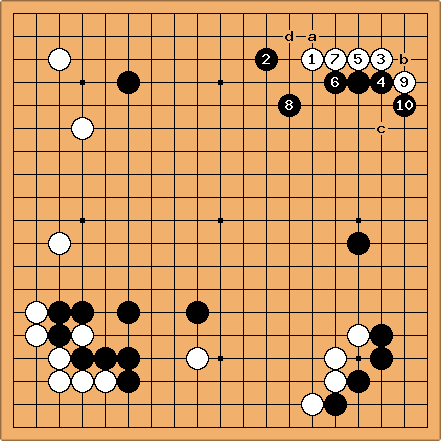 (here, b=11, c=12) My main question was how to deal with this white sequence. The related joseki that I've seen is

at a, followed by

anyhow, figuring White's shape was sub-optimal and had some bad aji, even if I didn't see a way to exploit it right away. Sure enough, later in the game I got to add some moves along the top of the board while attacking another group, and then monkey-jumped into White's corner. She barely lived, ending up with nothing more than the two eyes in gote. Was this the correct strategy, or is there a local weakening tactic or tesuji which I should have been aware of?

My understanding always was that White's move at a covers the corner from all sides and thus is much more stable. If White plays

as in the diagram, she will be forced to reply to Black moves like d, which is not pleasant. Two eyes in gote is a good enough punishment, indeed.

article by Pieter Mioch. It may possibly be of some interest.

By an amazing coincidence (?) we were discussing this yesterday in the club. The opinion of a local 3 dan (if I understood correctly) is that White may play

as in your diagram to take sente and rob Black of the extension, if Black hasn't got one. In the case of your game, Black does have an extension, so White's play was not good - proved later by his two eyes in gote :-) 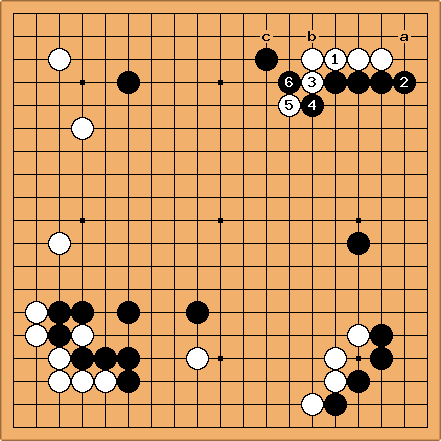 DaveSigaty: How about just decending to

? Black threatens to take away White's eye space by jumping to a. In the usual joseki where White plays at b instead of 1, she has the attachment at c in reserve if Black takes away the eyes in the corner. Here that is not the case. If White pushes up with

because of White's lack of shape. 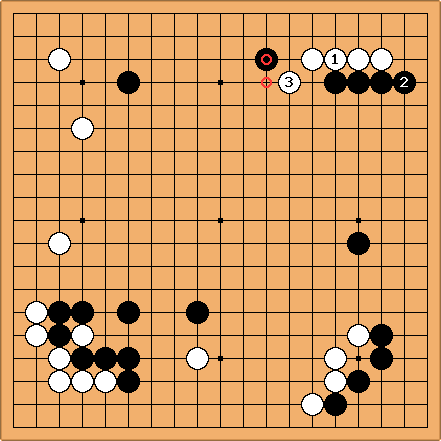 Alain Wettach: The problem with Dave's move is that White can play

to break into the center. This would obviously be bad for Black since

is now weakened instead of being part of Black's wall. Of course, Black can push in order to strengthen it, but White will welcome that since she will be pushed right where she wants to go! Moreover, Black will be pushing from behind and every push will decrease the power of Black's "wall" (it might even become a weak group). 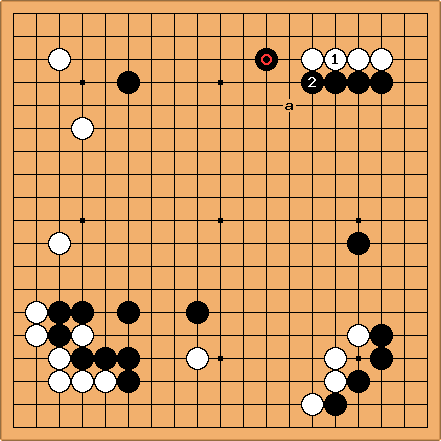 I think that the proper move would be

in this diagram (or a as was played in the game). Now

somehow makes part of the wall. There is still a cut, but Black can handle it with confidence, since the cutting group will be subject to attack.

The first reaction in a position like this should be to try to confine White to the corner. After that you can think about threatening the corner.

is a bit slower than the usual joseki move (actually I think it is an old joseki), but it is not a big mistake. 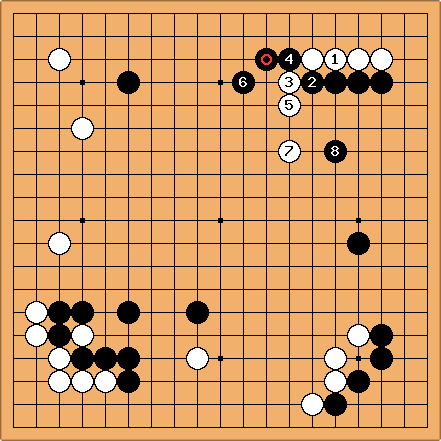 This is the cut and a possible variation. Black can handle the fight. Note that there is a similar cut when White plays the "normal" joseki. 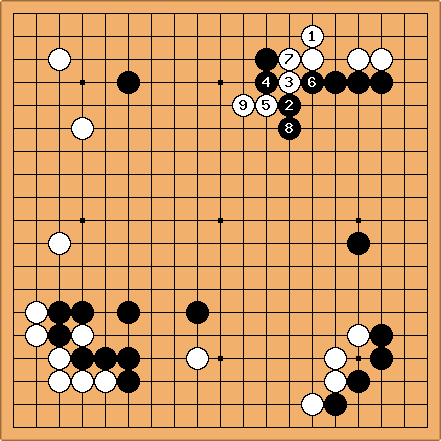 This is the cut in the normal joseki. It should not be played immediately though, but you should keep this aji in mind when you play this joseki.

Milo234 - I don't like black 6 in this diagram since it reduces the liberties on the 2 black stones at top. Just drawing back at 6 seems fine to me. It feels like black has lost something by trading 6 for 7. Now if black tries to run away on the top side white has extra forcing moves threatening shortages of liberties etc. Also black's shape on the right side though strong could leave behind aji for white to mess with if white tried to invade on the right side later on since there is a cutting point between 6,8 and the rest of the wall. 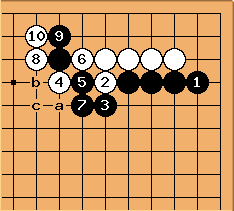 Basically I agree with Alain, but I would like to give another possibility for White to answer Black's descent as proposed by Dave. White could push up at

. If Black defends his single stone, White plays at

and walks into the center with what I think is somewhat better shape, while if Black attempts to cut at

, the black stone is captured after

Hum, André's variation looks nice and, in general, the kosumi is not a very good shape, but after his variation, I think that Black can still get something interesting out of the position by sacrificing the two stones (the so called squeeze technique). 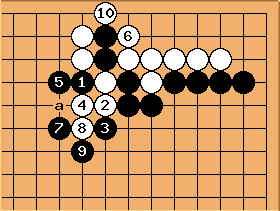 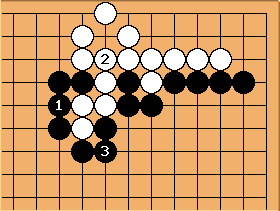 Black has good compensation for the loss of his two stones.

Would it not be better for White to play

of your diagram at

or a? This would allow Black to squeeze with b and c, but White would be out into the center. It seems that that way, Black gains little from his supposed squeeze. He would probably do better to leave it as aji, playing neither a nor b in my diagram for the time being. White will probably play c at some time to remove the aji.

Oops, you are right, White doesn't have to play

in my diagram (actually it is a bad move since it allows Black to play a good squeeze) and this makes your sequence totally playable even if I think that the kosumi is good enough for White (and simpler!). Anyway, I leave the diagrams and the discussion, I think they are instructive. 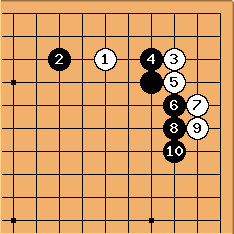 What happens if Black turns it the other way like this?

is no good, see below. 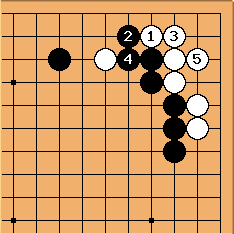 And then this?
--Grech 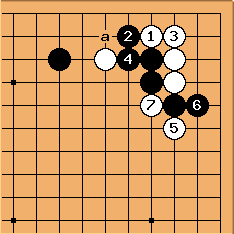 unkx80: I am too tired to enter everything now, but what I can say is that after cutting at

, White can aim for a and it will not be a bad fight for White.