We discuss when black plays the "severe hane" go blooper and how white can punish this overplay. 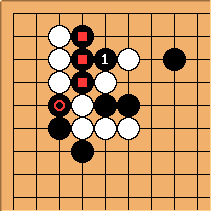 The "severe hane" is

. White attempts to kill the 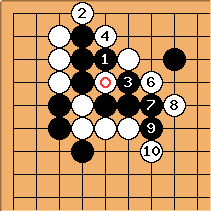 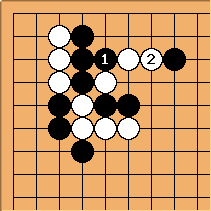 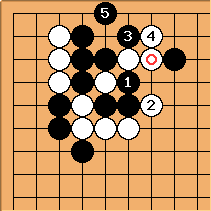 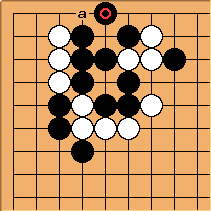 White has to be careful here...

prevents a white squeeze starting with a. Black is now threatening to push through in this manner: 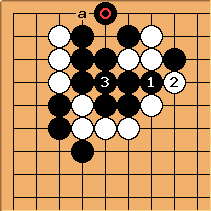 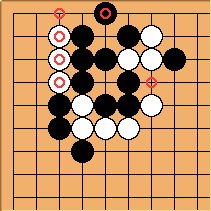 white must play at one of the

points to either block black in, or threaten to capture. In either case, black retaliates by attempting to kill the 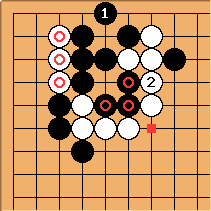 The white answer at 2 is a cool headed move. It eliminates 2 cuts at once in the white formation (at 2 and also at the point marked with the red square, as long as the 3 circled black stones remain in atari). Furthermore, if black connects, or does not immediately launch the semeai in the corner, it threatens to capture the black upper group entirely. See next diagram

Harleqin: Sorry to interject, but descending in the corner just wins all: 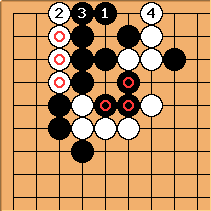 This seems to make the following discussion a bit academic. 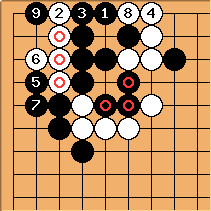 does not just capture all. White still has to fight a ko but a very different one. After the sequence to

White can't capture without a ko. 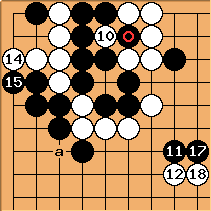 fractic: White takes the ko first and later has an internal threat at

so Black needs two ko threats to win the ko. If White wins the cut at a still remains. 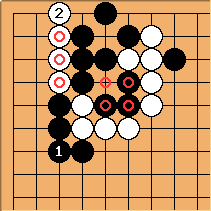 If blacks connects in answer to the atari (circled point), or if blacks does not take a liberty from the circled white stones (for instance by protecting the cut at 1 here), white wins the semeai at 2. 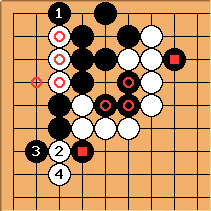 If black immediately launches the semeai against the 3 white stones in the corner with a play on the circled point or at 1, white simply cuts at 2 and gains superior outside influence. Black is confined to the corner, or to crawling on the 2nd line, whereas the white strong wall radiates influence in every direction. The marked black stones are weakened. In addition, please note that the 3 white stones in the corner still have some aji. 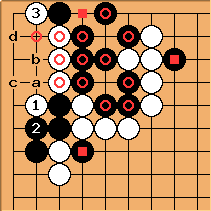 Cutting at 2 to gain outside influence is big. After the atari, black desperately requires a move in the corner, so white has sente. Let's see why the previous diagram should really end with a black move:

White exchanges 1 for 2, which allows him to answer 'a' with 'b' -- which nets life in the corner after c-d, because black cannot win both 1-3 kos.

After 3, black is stuck for good responses. As just discussed, 'a' isn't going anywhere. Circle will clearly get square as a response, after which we have a ko fight. Black cannot connect at square, because white will play 'd' or 'b' (about the same) to live, which will kill all the circled stones (and square).

So black must accept the ko.

If white is willing to ignore a ko threat, white can win the ko fight by playing at 'b' -- which will kill all the circled black stones -- but also save white's first move in this sequence. That will put the 4 black stones in extremely serious danger as well. This is pretty big, but let's suppose that white cannot win a ko under any circumstances. Still, white gets first capture on this ko.

Cryogenes?: (This is my first edit, please be gentle. If you agree with my comment, feel free to correct William's edit and delete mine) @William: I don't agree. 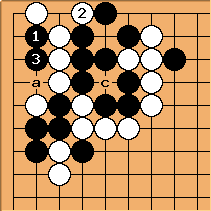 After black 1, white 2, black should not make an external ko-threat, but play 3. White cannot connect the ko. So white captures at c and black takes the ko. Instead of capturing, white can also play at a but Black takes the ko and the outcome is the same. 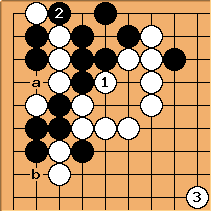 After white makes the first ko threat, black can take the ko by playing at a. Now b is no longer sente. This outcome is less horrible for Black than the one described by William. 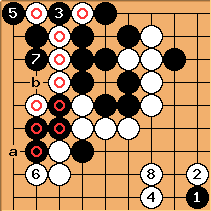 Black wins the ko by making one, large, ko threat first. White of course answers with 2, and black takes the ko with 3 (1,2,4 and 8 are not meant to be taken literally as shown, but just to mark the exchange of a ko threat elsewhere on the board). White makes any random small threat he wouldn't mind having, say anywhere from 5-15 easy points if allowed two moves in a row. Black and White can go back forth alternating huge threats for small threats -- each time White's ko situation is improving for future ko fights. Let's assume Black ignores the first one, and captures with 5. White immediately plays 6 because capturing the circled stones is worth at least 18 points in sente -- after capturing, black won't have two eyes without another move. Black answers, and 'a' remains as sente for white in the endgame (black lacks the liberties to hane on the first line (white might want to avoid playing 'a' immediately in favor of playing 8, because black would have two eyes if he ignored 'a', unlike ignoring 6). 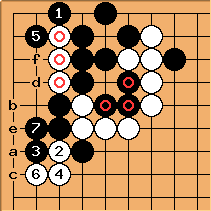 So white nets the value of his small ko threat, and still receives 6 and 'a' in sente at the appropriate times. This was for the price of nothing, compared to black simply taking gote.

White cuts at 2 to achieve outside influence, and black defends in gote up to 5, after which white makes one further sente exchange with 6 and 7. Later, white can exchange a for b, c for d, and e for f. Ideally as ko threats, of course, since all of these plays are white's prerogative.

This diagram is the same local position as if black refuses to take gote, except that black has not had to ignore a ko threat of white's.

However, it must still be said that white has failed to take advantage of the position. White 2 can be held in reserve while the ko fight in the corner is underway. If the corner is alive, then the cut at 2 will become superfluous. 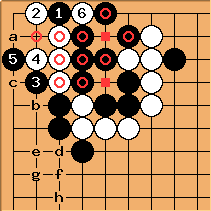 So, instead, after black 1, white should forebear cutting at 2 until he has gained the full value of the aji in the corner. That isn't to say that white must start this fight immediately; he could tenuki from the position to create more ko threats first, for example. In all likelihood, however, we would expect to see the very next move be the hane blocking 1.

Suppose black plays 3. After this is a one way street -- black must fight the ko. It cannot be avoided with, for example, 'a', 'b', or 'c'. If 'a', then 'b' nails the coffin shut. If 'c' or 'b', then white can simply connect the ko and has 3 liberties to the two squared liberties of the circled black stones.

At any point during this ko fight, white can cut at d as a ko threat. If black doesn't answer, then white will get a result superior to not having started the ko fight. After using d-e as a ko threat (if black takes the cutting stones, white will profit more by capturing the corner), white can come back and use f as a ko threat -- again white will get the same or better result. If black answers with g, then it would seem that black is getting away with a move he wouldn't have been able to if white had cut first. This is partially true, but, on the other hand, black is making it more and more profitable for white to simply ignore a threat and win the ko. Further, white can now use circle as an additional ko threat. After using circle as a ko threat, white can continue with h.

White at this point has used 3 local (=free) ko threats on a large ko, while still acquiring very reasonable outside influence. Even if black does eventually win this ko, it will only be by compromising all of his good ko threats -- so white should simply aim to start another ko fight after this one. Further, black's answer to white's local ko threats make the ko even larger.

After white has used d,e, then white has already established a superior result in this corner -- all of his ko threats can be made very small in comparison to black's very large ones. White will sacrifice the ability to completely wall off the left side in exchange for making black lose at least 3 large ko threats in exchange for nothing, and N+1 large ko threats to N small ko threats of white. Note that white could not possibly have large moyo potential on the left side, or his approach would have been from that side in the initial one space approach, further, he would not have invaded at the 3/3 point after the pincer, but presumably jumped into the center or counter-pincered the 4/4 stone. So allowing black to have g is very small.