tapir: Quite often, I don't really know, whether my moves were good or bad. So, tewari analysis may help. I would appreciate suggestions how to do it correctly.
Below is an example from a game I played on IGS. I'm a 3 kyu on KGS and still 14 kyu on IGS. I'm black. 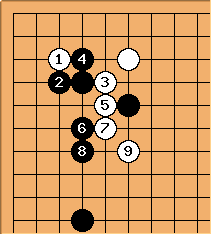 LukeNine45: I'm not any stronger than you, but this looks fantastic for black no matter how it happened. :) (BTW, I've heard that the rating system on IGS tends to get stuck as groups of people improve together) 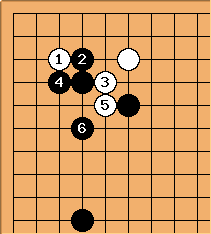 After 1 and 2, the exchange of 3 for 4 looks favorable for black. 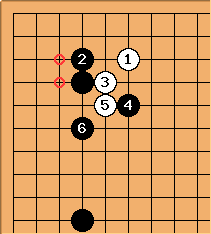 To answer 1 with 2 is somewhat heavy. The exchange of 3 for 4 is bad for black. 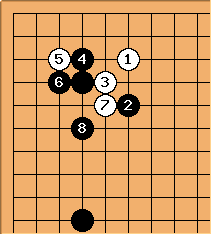 unkx80: I believe someone said that tewari can be used to "prove" anything. ;)

Someone: Actually, that was someone else. ;-) 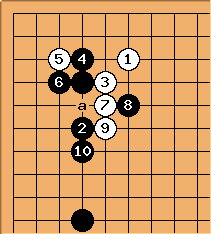 are ordinary joseki moves. The

is a bad move, but the

Paul Clarke: Is it clearer if we change the order of the last four moves to

? i.e. White jumps ahead to 9, Black peeps, White connects, and then Black defends at 10. All of those look at least reasonable, leaving

as the only clearly bad moves.

MrTenuki: That still raises the question "why did Black peep on THAT side?" (That is, why at

instead of at a?) 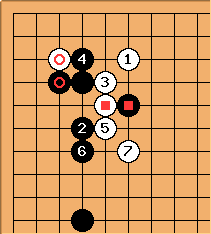 MrTenuki (again): I know that this is off-topic, but... can we see the full-board position? I'm asking about this because I'm considering other possible variations.

Tapir: Black sanrensei against white nirensei, after that white approached. So the ladder do not work.

(WARNING: As I'm also only 3k on KGS, please take the following analysis with a grain of salt.) 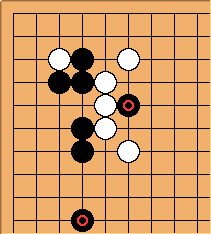 First, I'm assuming that the left side was more interesting for black (at least earlier in the game) judging from the fact that Black played the two circled stones. But I'm wondering if black can afford to see the top and the left as miai if the full-board position makes such a strategy possible:

Tapir: The capping play might well be used in the opposite direction as well. Just take a look at PlayingAgainstSanrensei or my userpage, where I try to collect some material about it. 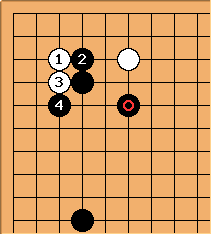 Yes, I'm suggesting the often-criticized 'severe' hane. My idea is that, if the ladder to the bottom right is favorable to black, the "normal" punishment for this move doesn't work. 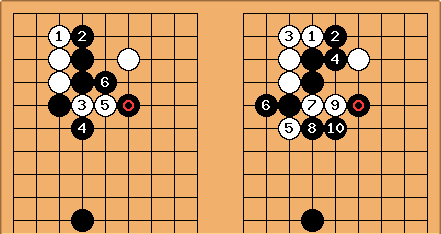 Result: White not only loses the cutting stones, but also has to worry about the corner. 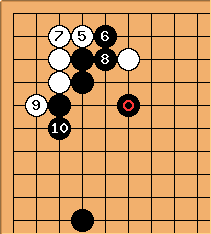 So, suppose that white follows this line to make the corner live... (Uh, am I falling into the katteyomi trap?) 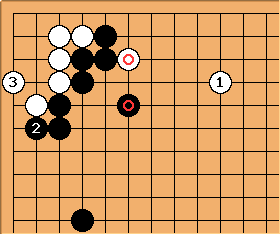 If white tries to use the aji of

by playing a move around

, black can gladly close off the left side in sente and use the sente to deal with the top. 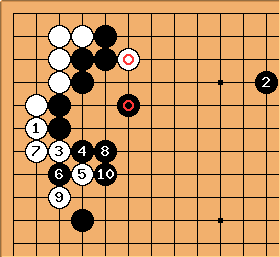 And if White follows the "standard 3-3 invasion joseki"... well, Black plays tenuki and gets the extension on top (is

too far?). Sure, white can play the double hane, but black trades the left side for the top and gets a moyo anyway.

(Awaiting dan-level smack down of everything that I've written above)