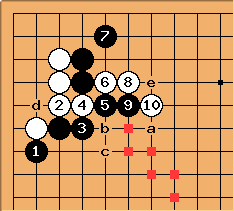 A complicated joseki. It might also be referred to as the "3-3 push and cut" or "3-3 taisha". Semantically, it could be regarded as beginning with

in the diagram, but up to

is forced in competent play. White can avoid the flying knife by playing

as the hiki back to d, or else by playing

immediately without exchanging the attachment.

This joseki emerged from research with / from computer programs, during and following the AI revolution. Top professional Mi Yuting was apparently an early adopter, since the original name of the sequence was "Mi Yuting's flying knife" or "Mi Yuting's flying dagger", that term indicating a secret weapon (in Go theory) in Chinese.

More information on the joseki can be found here. You can also research the position for yourself with

this Waltheri search link. However, note that Waltheri hasn't been updated since March 2020, and many innovations in the flying knife have occurred since then. See also

its page on the OJE (OGS Joseki Explorer) for more curated and perhaps more up to date explanation.

Yeonwoo covered the topic from

Flying dagger tesujis, from January 2021, provides "an exploration of a few of the more surprising tactics".

video featuring it (in passing) in February 2022.

a study found that the flying knife was the ninth most popular joseki of that year, appearing once in every nineteen professional games (from the beginning of 2019 to 2019-11-21). The database "included Sina, GoKifu?, Fox broadcasts, and Korean Baduk league website." In September 2020, the author said that it was "probably more common than 1 in 10 games in 2020."

Its popularity in 2021 was assessed using a database of about 5,900 professional games drawn from Go4Go and KifuDepot?. It was found to have appeared in 3% of games, which is roughly one in thirty. In the

study by the same author, it was found by have been the nineteenth most popular joseki of the year, a decline from its play rate in the couple of years before.

When a stronger player is playing against a weaker one, he may try to push Black around a little by offering to enter the knife. If Black refuses to do so then he will usually end up playing this joseki, sometimes called the "old hane wall" or "hane wall mark II" (to distinguish it from the pre-bot one with the hanetsugi).

Despite being a hypermodern joseki, it's fallen out of favour in recent years due to Black losing sente and being burdened by the peep at a. To make Black play this way can be an aim of the attachment. However, Black does have the option of playing

exchange. Another way for him to avoid complications is to play

but, after White responding at

, cover at b instead of drawing back to c. 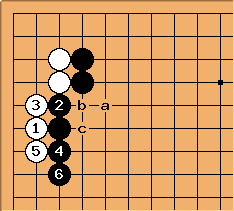