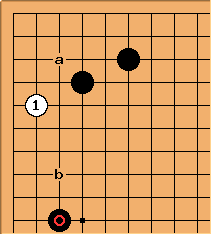 on the second line, sometimes called a submarine. This gives better chances of unconditional life than the 3-3 invasion, which normally becomes ko. On the other hand: there are some complex variations possible; White may need to apply sabaki techniques; and it is undeniable that White may end up with a low position.

. One key idea here is that the directions of a and b are miai. 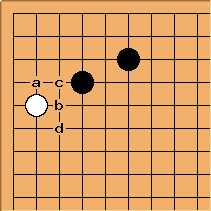 In pro games, four replies from Black are most commonly seen. In order of popularity, they are:

Naturally, since this is a middlegame joseki, any nearby stones may have a big effect on the choice of direction and subsequent fighting. 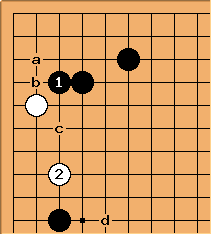 , white's most common answer is at or near

. The following moves depend on the surrounding positions. Sometimes white will play b immediately to make eye shape; more often white will wait until later to decide between a and b. Black will usually play at or near d to chase white into the centre, but sometimes black will press at c. 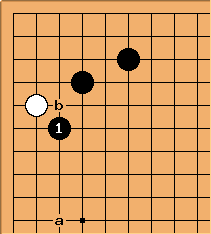 is only usual if there is no stone around a. The reason is that White can live comfortably in the corner. If there is a black stone around a that is too much to give her, but with no stone there, denying her the corner will give her a comfortable position on the side, so it is not as much of a disadvantage. Still, even in that case, if Black wants to confine white to the corner, Black b instead of 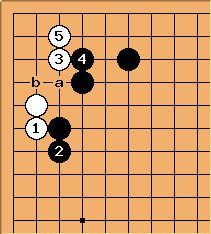 would be enough to live, White will crawl at

once to avoid being completely hemmed in on this side. After

, White can make a living group with either

is obviously better endgame at the top, but White a leaves some aji of cutting. If Black does not want White to play a, he exchanges Black a for White b before playing

; however, if White would have played