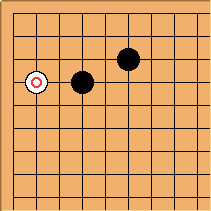 This low approach to the 4463 enclosure has been popular recently, in particular with Korean players. Some new variations have emerged.

The 'hem' name comes from the Japanese, and comments on the way

is on the edge of the open skirt. (See also submarine.) 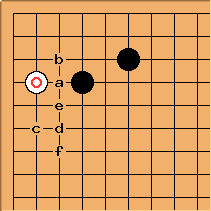 Black has a wide range of replies, since White is not forcing play in any one direction. The answers from a to e are given in order of apparent popularity in pro games. Answer f is an innovation popularized by AI. 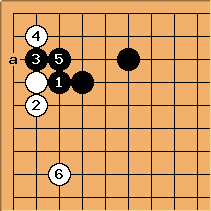 If Black thrusts down at

, White almost invariably extends to the outside with

next forces Black to choose, and thus can be regarded as a probe: Black will either answer at

, allowing White to connect under at a in the endgame, or at a, giving White some aji in the corner. Either way, White will leave

alone for the time being and extend to

or some such point (the exact position depending on the place and colour of stones further down the left side).

is played more often than not in this position by professionals, but can make White's stones a bit heavier, and give up some aji in the corner. See 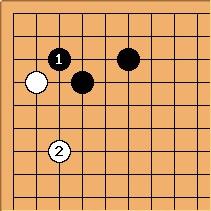 is a quiet move. White has not much to do in the corner, and extends along the left side. Again the exact extension depends on the further left-side position. 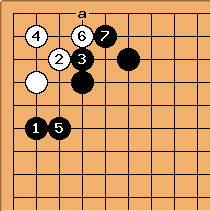 , Black tries to confine White to the corner. White follows orders with

, White usually plays elsewhere. So a is left as a very large point for both sides - note that when Black plays a, the best White can get in this corner is a ko. 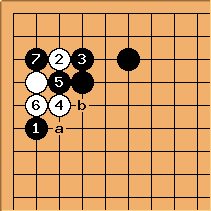 If White does not want to be locked into the corner as shown above, she can walk out with

here, although she does run the risk that her resulting group becomes weak. After 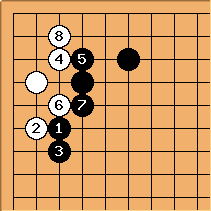 is of all Black's choices the one that's most determined to take the outside and give White the corner. Usually this will succeed, this diagram giving a typical variation.

For the play at e, see 4463 enclosure second-line diagonal attachment. 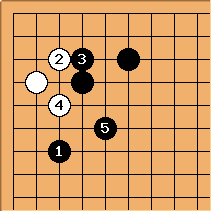 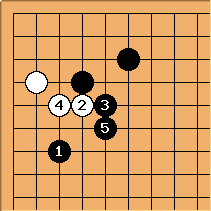