Make your move in the 2005 Goodwill Rengo, to celebrate peace and ecology, both in our planet Earth and in our minds!

For how it's done, see Ongoing Game. For a discussion of the game see 2005 Goodwill Rengo/Discussion. Note: the discussion contains "spoilers" regarding the moves already played...read at your own risk ;)

DJ: Here follows a list of players in order of appearance (if you are a new contendant please add your name):

As you can see, there are players (the Magpies) that have made moves in both teams... What shall we do with these insider traders??!? :-)

Quicksilvre: Aw man, I wasn't even paying attention to who I was playing for. My fault.

Hikaru79: Hey, it's like Zen Go! There's nothing wrong with playing for both sides, is there? After all, it is a GOODWILL rengo. ;)

minue622 : I have added my name right now. So, I can take a part in playing this rengo game from now? And...can I add my move on new go-ban?

dnerra: Sure, just go ahead! 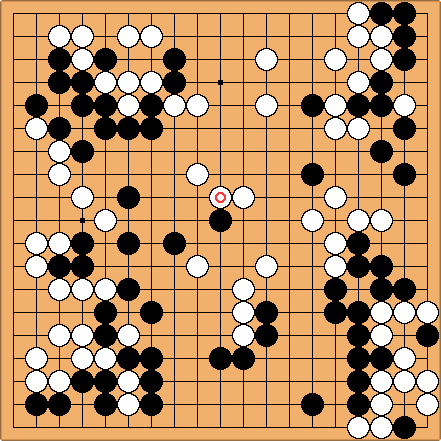 The game so far. 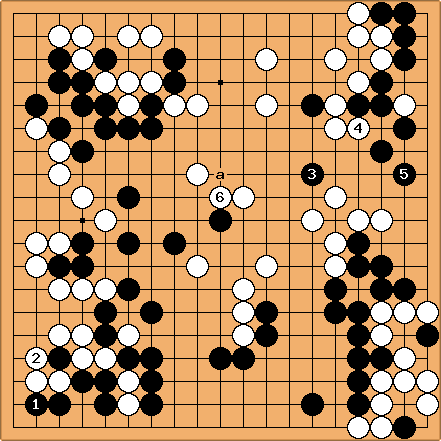 , for death awaits you all with nasty big pointy teeth

: Seems to me Black is way behind... Let's close the game with a flourish.
The swap in the LR corner was too costly: it is true that there was a lot of aji, but maybe White had too easy a life. Why don't we analyse the position in the Discussion?

: Ever-faithful to the Herons, I like this move as it has some rather nice follow-ups, and it should swallow the stone played earlier.

wasn't expecting to connect to the right, but was played bearing in mind the proverb Make A Feint To The East While Attacking In The West: I tried the (vain) hope to break in from the left using it as a bait. Now that dnerra has closed the last door, I think Black should just resign.

dnerra: How about the following: everybody counts, and posts his result on a separate page (before looking at other people's answers). Then we take the median of all answers as komi, and split the teams so that everybody who sees White more ahead than the median gets to play white. Should be a great endgame exercise! 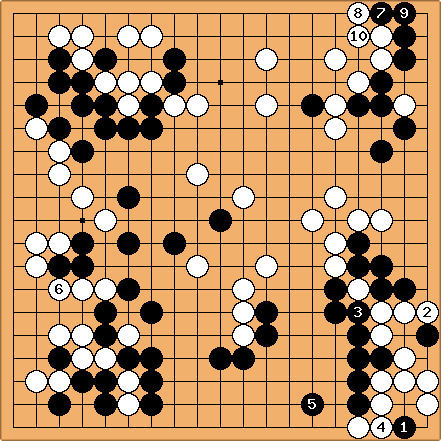 thou shall not live

DJ: Ah, the beauty of rengo! I am afraid stubborn play led Black to a loss... Trying to limit the damage.

, Completing the nice work of my team mates.

(please revert if you don't agree with

Dieter: I agree with

but not with the precedent of playing three moves in a row. What is obvious to you may not be for other players, be they weaker or stronger. 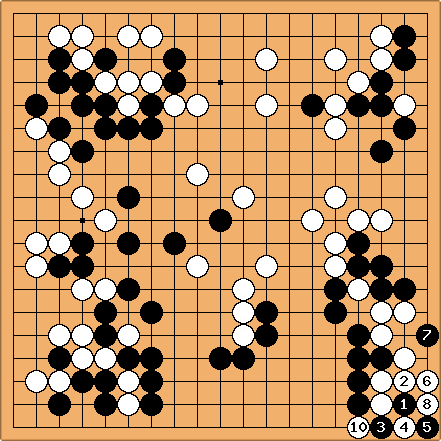 , I don't think it lives, but go ahead and prove me wrong...

, I can't resist playing another move, seeing as I haven't had a chance to join in in a while. After this I'll let others play the rest out...

, I too usually don't like to play 2 moves in a row, but since this response is automatic (any other move and white lives), I'll play it..

, I guess white can live here after all. 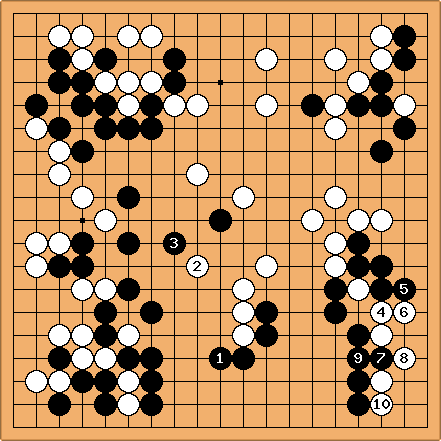 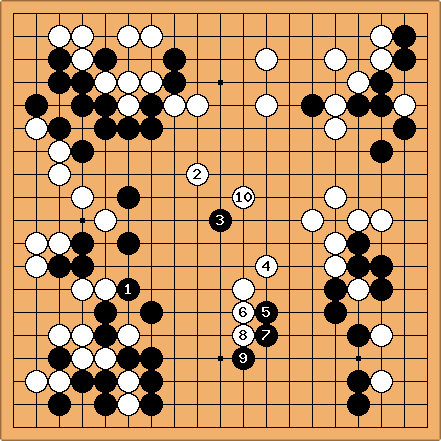 : Ok, let's slow down and recover from the frenziness. I'm gettin older and my heart seems weaker... Making shape?

: sooner or later white's gonna have to make some territory.

. Slow but I don't want to leave cutting aji around here.

. A third White move here would give them too good shape.

. Don't want Black to have this point.

. Draw back once. Gain liberties.

. We're on a road to nowhere 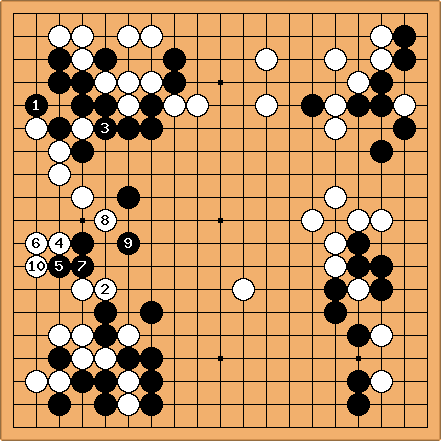 Claiming some territory to the left

give me liberty, or give me death...

Let me slow-down the attack a little before my teammates get overboard with... 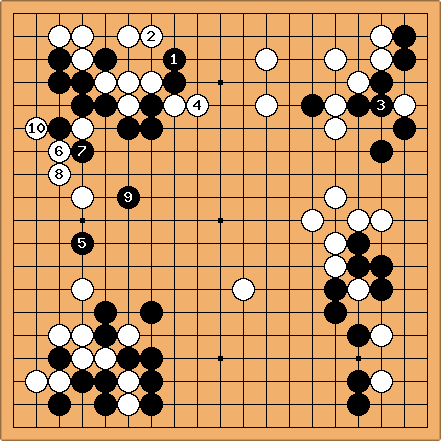 ...things are getting interesting...

. Extend from an important stone.

. I feel there's aji on the left (and I don't know how to continue on top).

. Emergency measure for the white stone, or attack on the top left? Black crows, you decide...

removing the aji of the cut.

giving white some kind of base 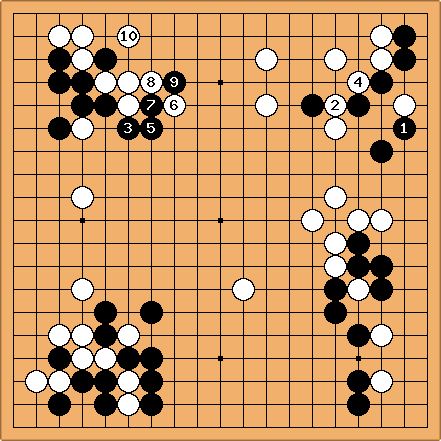 . Rengo ko threat so I don't mess up anything :)

minue622: Althogh seems to be a mad move, I believe this

is the only move to make a chance of winning.

DJ: Mmmh... I have the feeling that Black shouldn't have allowed

and, most of all, that he should have answered it... Now poor little Black group is in for a thorough harassement. It is true that Black can as well harass White's TL corner, still I am uneasy with such furikawari's...

maybe I should try playing for Black

. Hope this time I really got an easy one :) 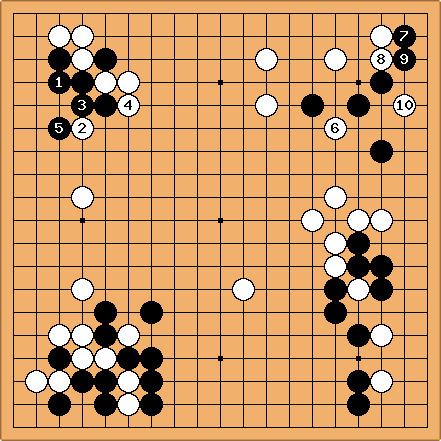 . Peep where you cannot cut.

the squirrels are coming

No B 2 bombers here! 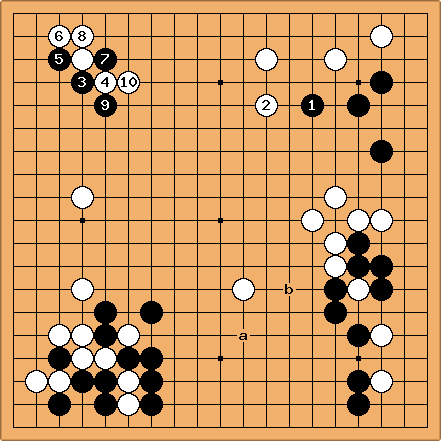 : Moyo? What Moyo??!? Do you mean the White one on top?
I think playing a would be submissive, starting a fight around bcould be dangerous (you never know, what if White gets even stronger toward the top? Our poor little black group on the TL could suffer...).
So I tenuki and play a move that could help ditto group and move into the White Sea... Hoping for the best ;-)

. White's move makes the upper left scary. Let's see how this shakes out.

attacks and builds the top.

: Hoping to make base in corner. By the way, I wanted to play in white's position, but nobody seems to continue to play black's move. I can't wait anymore. 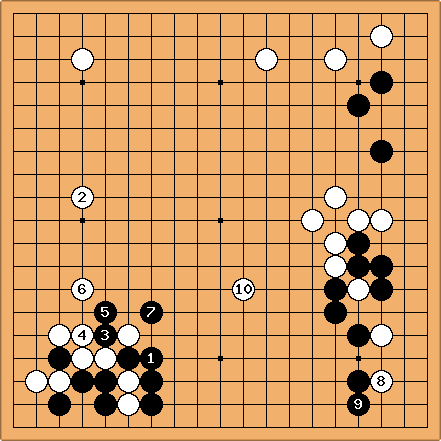 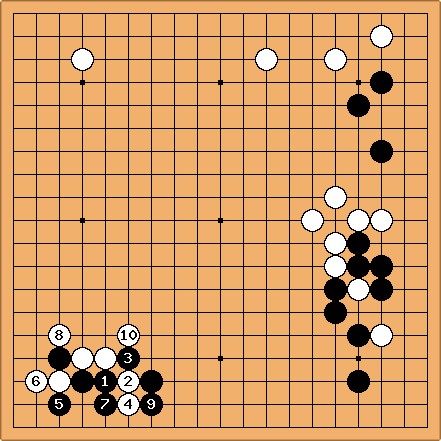 , Moving things along while some of us still have the old year...

- passing time until I can leave work and celebrate...

, If black is going to play Joseki then I will too 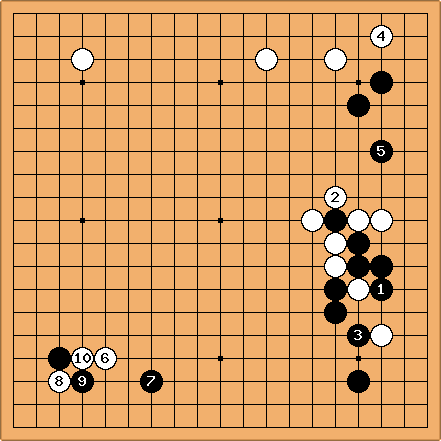 . I don't think Black lives on the right without this capture.

. Harass the two black stones in the corner (while extending our base), now that we have a strong ponnuki down the side.

. Brrrr. To live small, better than being chased over the board...

. Either making or preventing shimari is always big, and looking at the whole board, approaching here seems wiser than enclosing the northwest corner. Looking over the most common joseki, a high approach seems preferable.

, this pincer seems the right direction.

, I'm not feeling very imaginative today, but it is my birthday. 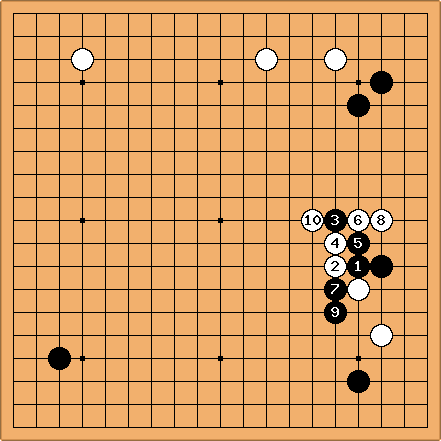 , Natural response? (Natural to me at least)

, the joseki move. But Black can get a nice framework now.

, pushing through the opening. Black 13 seems slack, better at White 14

, With a lovely cutting point.

, only a few more days of noggy goodness before the government takes it all away.

, does White have a prayer? Strengthen the weakest White stone.

, there will be some sort of trade here. An exchange of gifts, perhaps?

, strengthening the two white stones while threatening the black with atari. Ready to make concessions near 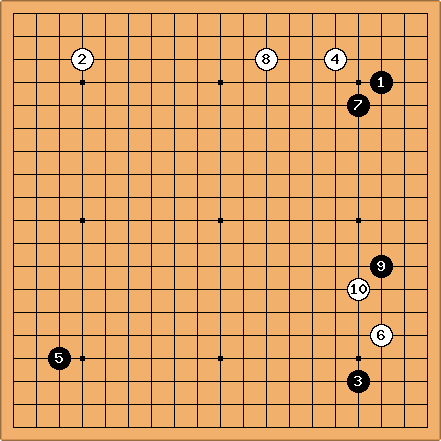 , in the wake of tradition.

, in the name of overplay.

, looking back to a simpler time

, in the spirit of co-operation.

striking a blow for liberty

Reaching upward. In the spirit of beginners! Probably a bad move.