Hi all. My name is Hicham Vanborm. I am a 30 year old Belgian 2k(KGS 1D, AGA 1D?)from Brussels. I recently moved to Chicago. (Back in Belgium now)

I played my first game of go when I was nine against a babysitter. But though I remembered that interesting game for years, unfortunately that remained my only game for ten years. A good friend of mine had a book with a description of 100 games in it. One of those games looked quite interesting, so we wanted to play it. But as we didn't have a board, we had to make our own. My friend made a board in Powerpoint (with copied stones). So that was how we played our first few games, now almost six years ago.

It quickly became clear that something was not right. We were having some really strange games. After rereading the rules for ten times, we finally understood our mistake. We thought that you should check the liberties of the stone you just played before the liberties of the other stones. This means that one eye was enough! As you can immagine this gave some strange effects. The board was full of ponnuki.

But I have the feeling that this false start realy gave me a deeper understanding of the rules then most beginners, because we had to work them out for ourselves. What was really interesting was that me and my friend were getting better pretty quick, like one kyu a game. Especially after he bought 'The Second Book of Go'( Which I still find a bad book, even though it helped us a lot). When we went to a go club after a couple of weeks playing on our own, we were said to be a about 18-20 kyu.

I worked myself up to about 14k in the next half year, but then go just faded out of my life (very unlikely that that could ever happen again, I am now way too addicted for that to happen;) ). Before go my main hobby was Magic:The Gathering. During my two year hiatus, I mainly played Warhammer.

But then go came back in my life with a vengeance. I started playing on KGS and bought go book after go book.

I play on KGS as Hicham. Never played on DGS or IGS. More to come... 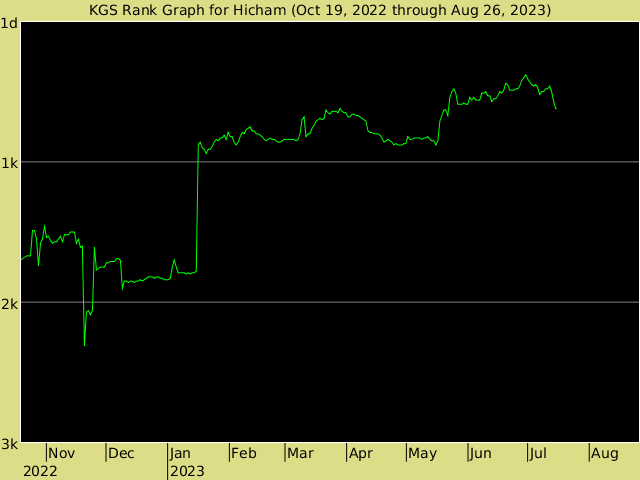