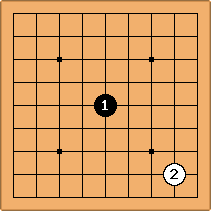 I was White, and played a new orthodox opening at 2-2 point,

. It is clearly not effective but new and challenges Black in dealing with uncommon situation. 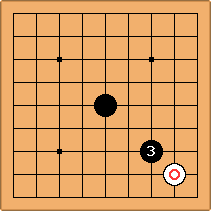 as if it were to live. Instead, White should leave it there, to post a potential risk to Black. 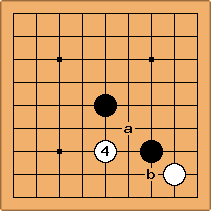 gives Black two choices of local play: to link at a or to block at b. 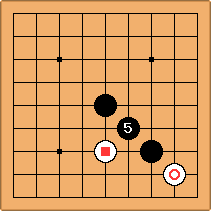 also improves the situation of

, from being hard to live to being easy to live, as

is serving as a base for attacking the cutting stone of White (if any). 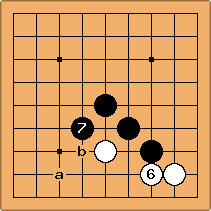 The White group is now too big to let it die. White needs to expand the base to ensure the safety of this group. Two choices exit: a and b, neither of which has a clear more advantage than the other. 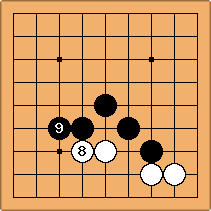 The white group is now strong enough to survive. To be effective, the next

move of White should invade the vast free land on the top, and should not

play locally, as it will be too late to go there. 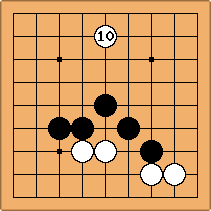 is a good choice. It can jump to left or right, depending on Black's way of attack. 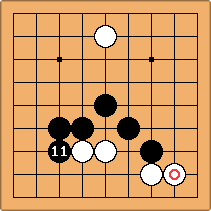 attacked the strong group of White, which is a bad move.

potential future as it can extend to the free space. 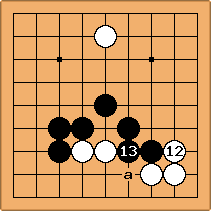 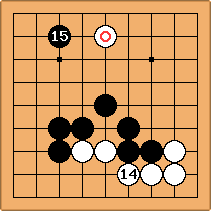 , and it's time for White to jump rightward, in order to camp. 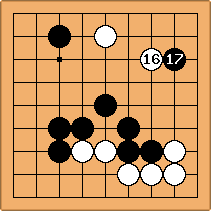 is not a good idea. There are two supporting armies that can help

is already on bad situation without any White's movement. White should see the true purpose of

and the big black group. Hence, White should remove the potential connection by blocking

and the big group. In dan-level games, moves that you think irrational are usually rational. 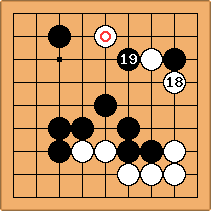 , and White doesn't want that to happen. 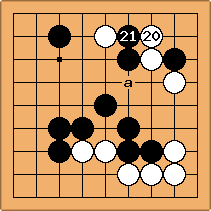 White will hane at a, to attack both black armies at once. 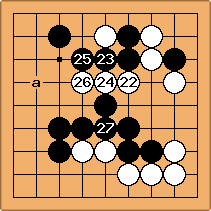 Black fixed his shape with

and can link at a. White must prevent the link. 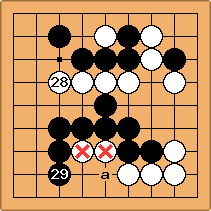 at a, which White can certainly prevent it. The actual purpose of

is to widen the base so that this big black group will be able to live. 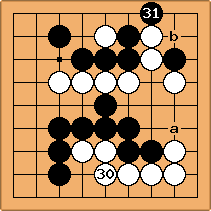 is bigger than a if Black can continue his attack at b. Now, it's clear that the lower white group can live, but the upper group is still uncertain; White needs to answer at b, to make sure this big group will be alive.