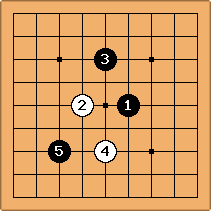 Formation from Moves 1 to 5 is a common opening of Darksniper 8 Dan, the strongest 9x9 go player in my opinion. 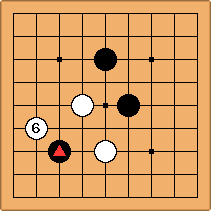 was suppressed by both sides of White; Black cannot live well by extending from

. So, Black's new strategy is to use

as a sacrificed army that supports the development of Black's great wall. 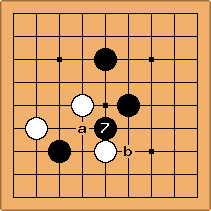 , Black acted as if he wanted to link at a. In fact, Black's strategy is to seal this white group with b, to gain the outside free land, following Monteo's Law of 9x9. 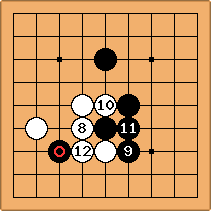 Things occur as Black wanted. White had to put many stones (

) in his territory because of

, whereas Black has gained the outside land and

is not dead yet, still dangerous to White. 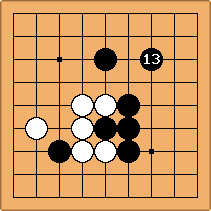 Black felt the free land on the top right is vast, and needs a soldier to guard it from attack by White. So, 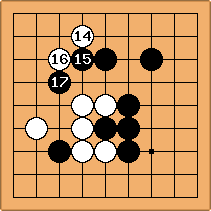 if White does nothing in response locally. 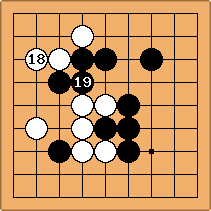 Black's strategy is to allow White to live in a small area, the top left corner. So, he simply connected with 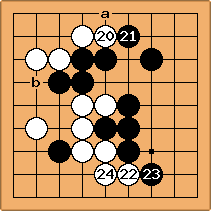 Black was happy with

is a both-defend-and-attack sente, which is perfect. This move allows Black to attack further at a and b, which are all sente.Sente (or initiative) is an important winning tactic in go that sustains greater damage to the enemy (Chen, 2006). 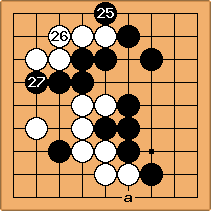 both blocked the two white groups and attacked the top white group which is still at risk. At GoQuest, good players have to be not only smart but also quick.

takes more time for White to calculate the sequence of play than a. So,

is better than a, as the former is sente. White will not waste the time for calculating the sequence and ignore 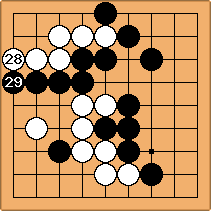 White chose to stand with

, to make sure this group can survive. Black followed with

, to complete the blocking and to force White fill more stones to make two eyes, which will destroy his potential space.

, making White to kill his own space with

. This corner battle allows Black to initiate the southern attack with

, which sustains the demolition of White's land until 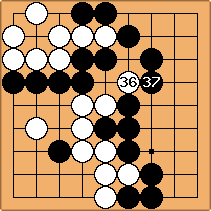 White had the first chance to fight back, with

. Black can cut at a but he wanted to play solid move

, following the proverb "Never take a risk if you are leading." 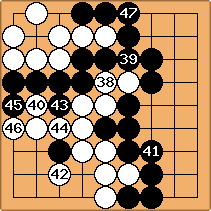 The endgame began at Move 41, without complexity. 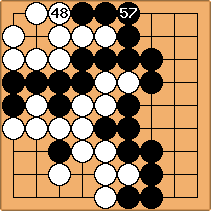