The secret of go study, since the Edo period, particularly at the Honinbo house, is to understand WHY the best go player played like he did. At that time, it's hard to know who is the best, and even harder to know how he played unless you have his game records. This is not true nowadays, during the Internet period.

This game is the first invincible 9x9 game to accompany this book.

The best 9x9 go player. In 9x9 go, there are only 12 people who have reached 8 dan GQ, including Spaceman 9 dan GQ--the top player at GoQuest. Among them, Darksniper 8 dan GQ has the best statistics: He played least, and beat almost all the opponents. You should review his games if you want to study the art of 9x9 go at the advanced level. Below is a game between 8 dan Darksniper (Black) and 6 dan :AyaXBot?, the second best Go playing AI which can beat Spaceman several times (The best AI is :AyaZbot 9 Dan, the player that has the top Elo! 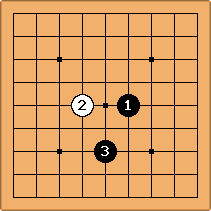 Attack at the very beginning, with

. Black started with the New Orthodox Opening of

, which is Darksniper's most favorite formations.

and defends the bottom right corner. 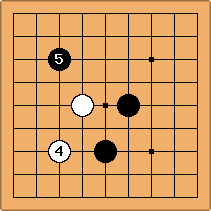 De-balances the shape of White, with

. Black is ready to divide its army after

, while White becomes unstable and needs a complex fighting to change the situation. White needs to play a touching attack. 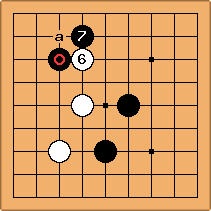 Fight back a touching stone with a sente hane.

and blocks it from the major army on the right.

is a common response to a touching attack. The bending stone creates a weak point at a, which should appear far from the enemy. 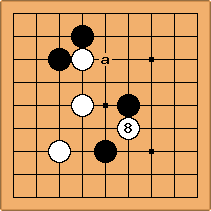 Give before you get.

touches Black in order to exchange for space on the top right corner, by using

to control Black's responses. If Whites simply played a, he would end up with no space at the corner. 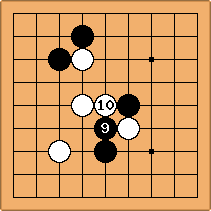 Allow division if your split armies can live well. Although White can cut Black into two groups, both of them are strong, easy to become immortal. 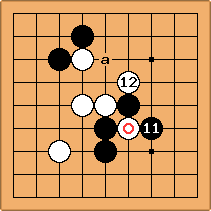 Attack before you defend.

to die, as he wants to use

for supporting the defend at a and serving as a basis for camping at the top right corner. 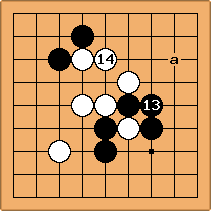 Allow the enemy to live in a confined area. as done by

, which makes the southern black group look solid and have a bright future: Black can play a big and strong move at a. 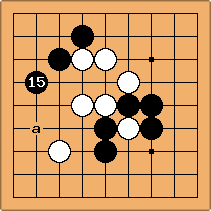 Defending that can jump later is good. as done by

, which is low enough to defend the corner and can jump to a later. 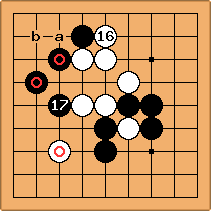 Don't reply a gote attack if you can do a sente attack. Black does not reply

because he has a contingent plan: to play at b if White plays a. He attacks with

instead, which, if ignored, can cut

from the big white group.

also demonstrates the proverb "play diagonally if you are near the strong enemy." 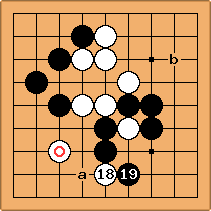 Allow the enemy to live if his army is small.

to live at the corner, and claims the bottom right corner. Black and White look balance, but Black can either attack more at a, or extend to b. White sees these risks, but he wants to play a sente move on the next move. 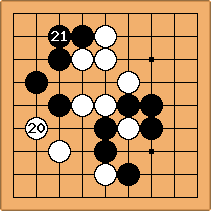 makes the whole white group strong, while the northeastern black group has not been well established yet. It is urgent to help this black group, with 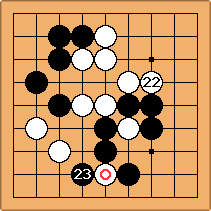 If you don't know where to play, attack the weakest stone, as done by

. White has two groups, which are both strong.

is the only weak stone on the board, so Black attacks it, which also makes this black group even stronger. 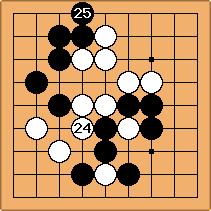 Small but strong is better than big but weak, as shown by

is not powerful; Black can reply it later. Black plays a small, strong, sente move at 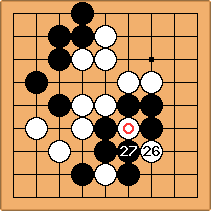 Kill him before he kills you. If Black does not capture

, White will kill the black stones here. White wants to make it difficult for the southern black groups to survive. 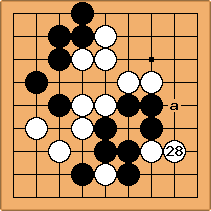 Read many stones ahead. If Black ignores

, he will be in trouble because of White a. 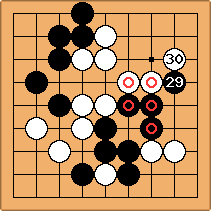 Defend by attacking and moving toward a free space.

. It also moves toward a free space with potential opportunity.

is a basic reaction for limiting Black's development. 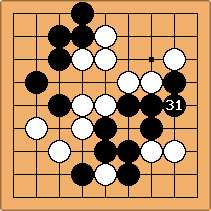 If it is big to defend, defend it, even with gote.

is a big gote defends. 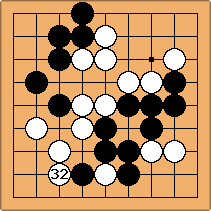 Don't reply a weak attack if you have a bigger point to play.

is a weak attack, which cannot kill or destroy any black stone. Black can play somewhere else that has a future potential. Eye for a free space. 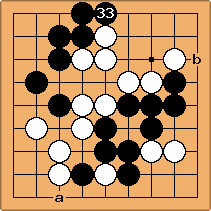 Move from a strong base if you have to contact the enemy.

extends from the strong black group, which is better than a or b as the local bases of Black are not strong enough to support the attack at a or b. 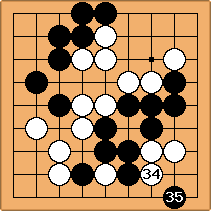 makes it hard for White to force Black around here. 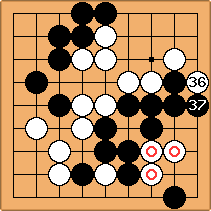 You can block if you can survive.

blocks White and kills his own space from 4 to 3 points. This is okay as 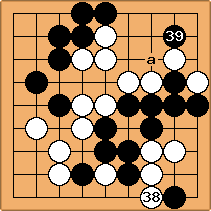 Attack at the weak side.

attacks the weak side of White. If ignored, Black can demolish this weak wall at a.