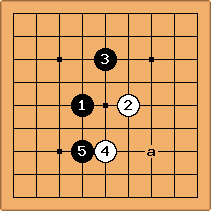 I was Black. We opened with moves that are common in high dan games.

is quite defensive. Nowadays I prefer a to

, as it is more invasive. 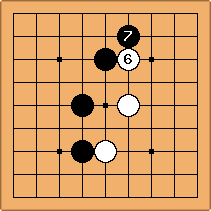 as a reply to the contact move. Black was a bit ahead. 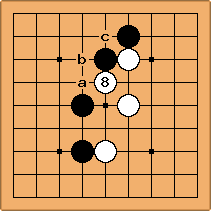 If Back plays at a, many weak points will be emerged: b and c, leading to potential turbulence. The ultimate art of go is to make the situation clear and simple. Black should play at b, to bring the future situation under control. 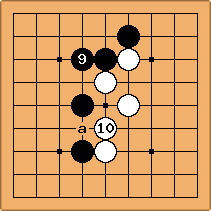 . He might think this is a good negotiation. He wanted to occupy the right side and let Black govern the left side. Black will happily play at a to wall his city. Never help your enemy build a wall. 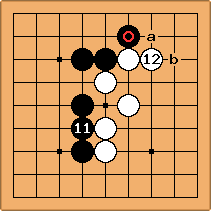 which, however, kills his own space and looks very defensive. Black can strengthen

by playing at a, which can invade later at b. A lesson that White should learn is this: Avoid a defend that kills your own space. 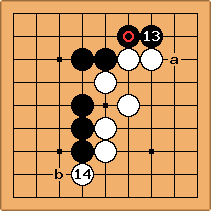 and can invade more at a. This is called moving with the bright future. White ignored

, which is a gote move and has no bright future. Black will enjoy blocking at b. 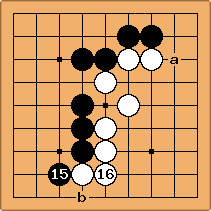 To play at a is big for Black, but

is still weak and prone to be attacked with high potential risk. Black should play at b to make

a strong wall and keep the game simple. 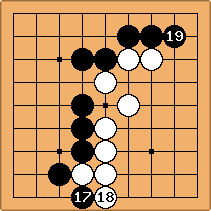 and believed White would immediately answer

, which is incorrect. White wants to capture 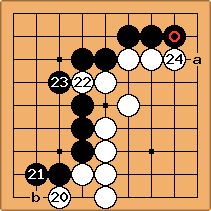 White played a series of attack, with

. Now Black has a sente attack at a, which is bigger than b. 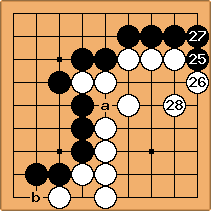 is the biggest sente attack left for Black to play. Now the next big attack is a, followed by b. During the endgame, attack at the biggest point first. 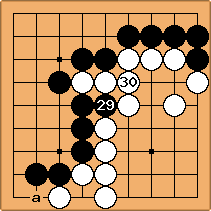 is bigger than a, and also a sente attack, which gives Black full power for endgame control. 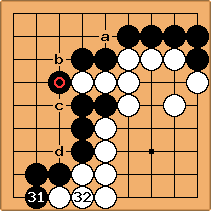 is the last sealing move on the edge, but the war is not over yet. Black still has the weak points at a, b, c, and d, which make 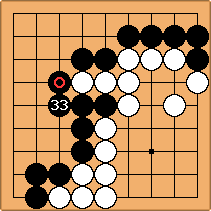 Fix the weakest stone before you pass, as shown by

. White has no chance to invade and live in the city of Black.