This is a game I beat Dan player after becoming a shodan and playing one game a day, to maintain my 9x9 strength. 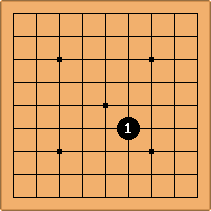 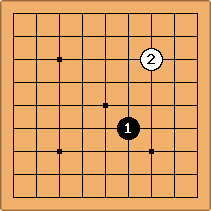 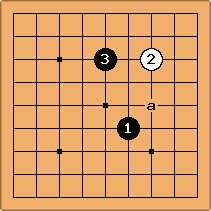 Life is not that easy. In 9x9, you have to be highly adaptive, as any single move of your opponent can change your dreams from good to bad ones. Just like

together forms a big knight move, yet I saw a large free space on the West, but

is still too weak to live alone. Standing at a is the most urgent task for White. 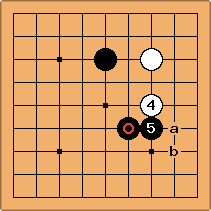 is the first contact move of the game, so the middle game starts from here. One proverb, "Reply a contact move with a hane," is not applicable to

and much powerful--If White answered at a, Black would hane it at b, which is sente and well walls the bottom zone. White is looking for a more complex answer. 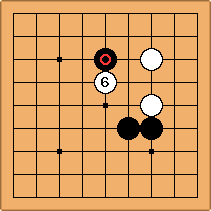 is the weakest stone of Black, so the weak point of Black is here.

attacked the weakest stone and paved the way toward the West.

is also hard to cut and follows the proverb Attack a large knight move at the neck. 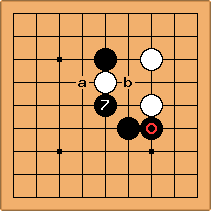 is not as powerful as his previous attack,

. White can escape at a, which has a better future, compared with b. 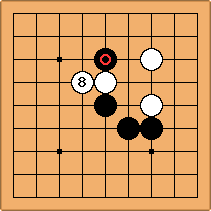 also split Black into two groups, one of which is very weak, 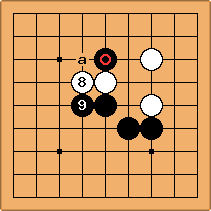 and manage to gain the lower, larger land. For example, if White blocked at a, Black might extend from his strong group (the bottom group) and then enjoy mapping the large territory in the southern region. So, White needs to do something that destroys Black's strategy. 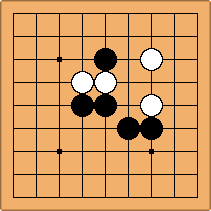 The bottom left corner is the largest free land in this game, and thus a good location for new settlement that White should eye. 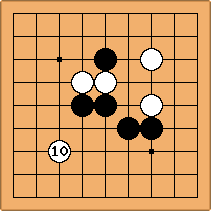 demonstrates the proverb "_Invade in the right place at the right time__." The top white group is strong enough to live in the northern region. White does not need to fill more stones around that group. He should open a new land for settlement before it is too late do.

is in the right place as it is not too close to the enemy, and it is easy to live. 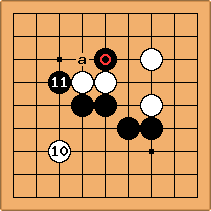 Black used the strategy "Attack the East, affect the West." White realizes that

is being indirectly attacked by

, but he does not want Black to help

at a, which will be big, sente, and lethal. If

will be attacked more forcefully, White can help it by extending to the other side. So, the most urgent task for White is to block Black at a. 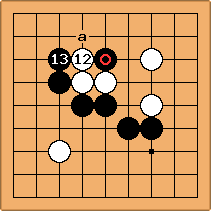 White's blocking is not complete yet. Black can help

and push White by playing at a. Hence, a is a key strategic point that each player wants to occupy. 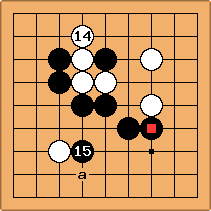 is a contact move that is not as powerful as

. White can hane it at a as a counter attack. 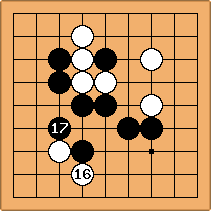 , which completely divided White into two groups. White's strategy is to make both groups alive with maximum possible space occupied if he wants to beat this 2 Dan player. The next diagrams show how to implement this strategy. 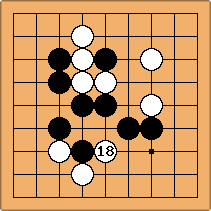 The first step is to attack before you defend, as 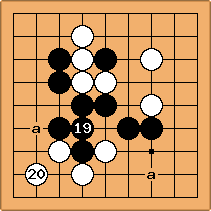 applied the proverb "In a confined area, play diagonally." This formation makes it easy for White to make two eyes and survive.

also create a chance to attack at a in the future. 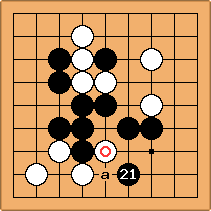 Black saw the potential of White development toward the East, so he prevented it with

, and probably expected White to response at a to help 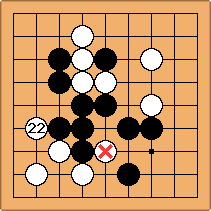 White chose to defend and attack with

, which is sente and ensures the safety of this white group. White let

to die as it is not good to secure one troop but will make the whole army collapses. 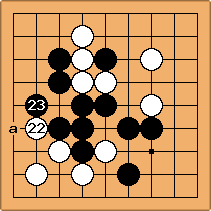 blocked White from extending northward, and can further attack White at a. White did not want to take a risk by playing elsewhere big. The situation after Black a will be unpredictable and require a good board reading skill for White to make this group immortal. GoQuest is a blitz 9x9 go server; you have to be not only smart, but also quick. Complex calculation is a time-consuming process, so White should find a simple answer to save both time and stones. 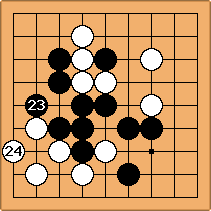 is a simple answer to

. It is small but ensure the safety of this white group, which, if killed, White will not only lost in this battle field, but also be defeated in this war. Hence, White allows Black to play somewhere else big, which is fine because nowhere is bigger than the collapse of this white group. 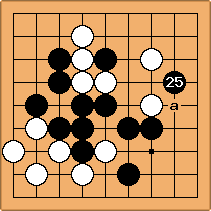 is a wise attack. White cannot attack it at a because the combat will be complex and would lead to the greater loss of some White's land. 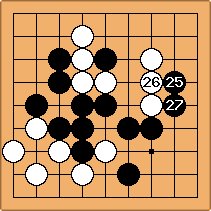 , to simplify the fighting, which forces Black to move backward with

is a sente move. Defending with a sente move is good. Now, White has a chance to initiate the game. 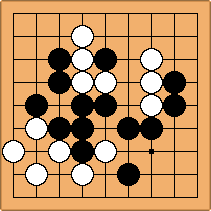 It seems to White that his northern group is not yet well established, while Black is ready to attack White from many directions. Hence, it is safe for White to fix the shape of this group. His strategy is to evolve to a two eyes group without giving Black a chance to attack him. This requires powerful sente moves. 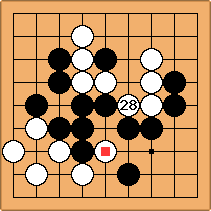 is intended to create an eye shape and to prohibit Black from attacking this group at the same time. 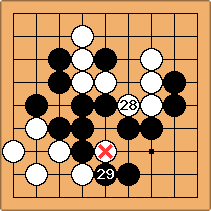 who is low in value and willing to die for the benefit of his army. Now, the endgame has begun, as both players will mainly focus on the 2nd and the 1st lines. 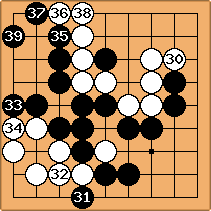 is a big move, while Black thought

is a big move. Black played a series of sente moves until

which allows White to fight back with big sente 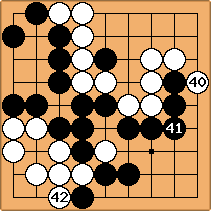 The scores for both players are very close; well ending is crucial. They were looking for possible biggest treats left for use as sente moves.

is a good example; Black had to reply it with

is not so big, and can be ignored by Black. 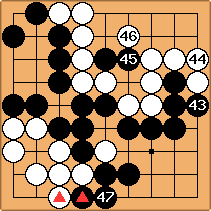 until he has no big treat left. He came back to help

after he had failed to attack the northern White with 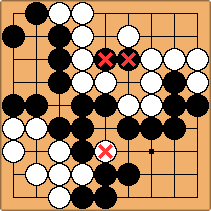