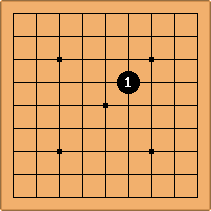 is a common opening in dan games. Its purpose is not to secure the corner but to support Black's future attack (Move 3). 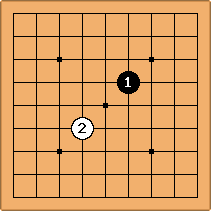 makes the whole board balance. Successful maintaining of balance will lead White to victory. This game shows how to maintain balance against the strongest 9x9 player in the world. 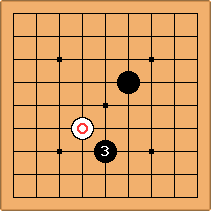 and defends the right sector. It also diminishes the balance crated by White. 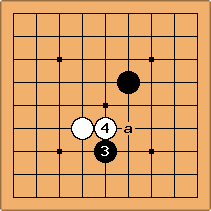 White answered with a very small and solid move,

. This is a major difference between Dan and Kyu players. Dan players do not concern much about territory. They concern more about solidity and future potential (influence).

looks small, but White's next move will be very big, such as a. 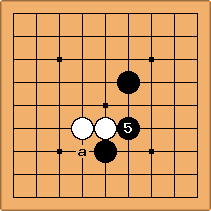 Seeing the potential of White's next move, Black linked his stones with

, which is a key point for both players. Up to this moment, the upper left zone is very interesting for both. It's White's turn; Kyu players would extend northward to occupy the large space over there. But, for Dan players, the most urgent task is not to occupy a large space, but to attack the weakest big stone. 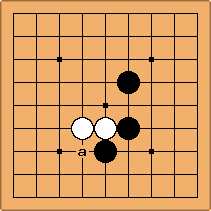 It seems to White that the lower right corner is too big for him to give it to Black. If White extends northward now, Black would confine him at a, which will de-balance the whole board. 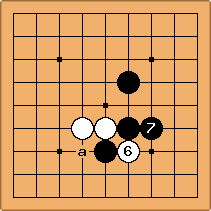 So, White cross cut with

, and Black replied with

which looks small but has a very high potential if he can play the next move at a. 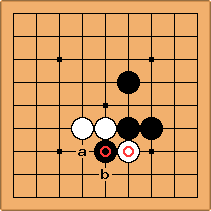 If White played at a,

will be dead. Therefore, he will create the ladder by pressing at b which put

into death and protect 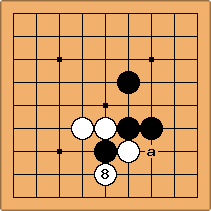 Black is interested in extending westward in the upper zone, but the situation at the bottom right corner is still not well under his control. Black will lost this corner if White can push him at a. 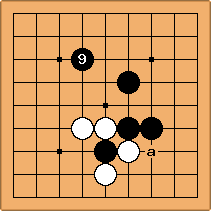 A careful calculation makes it clear that the bottom right corner situation is not a big deal. Black was sure that

is the biggest point to play. If White will push at a, Black can attack more in the left section, which will be very big. 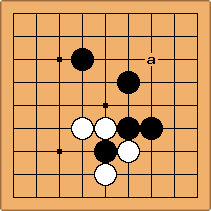 It seems to White that Black has claim nearly three fourth of the board, a bit imbalance and not good for White. White needs to invade the top right corner. Kyu players may go to a and manage to live there, which is very limited in space. Dan players have more special ability of invasion, such as sacrifice tactic, as demonstrated by White in the next few moves. 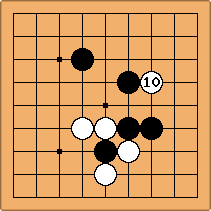 is a high dan move, which creates a possible complex fighting and big exchange. Kyu players cannot employ this tactic because their invasion usually end up with the death of their stones, because they do not know what to do after

: To live in isolation at the corner or to connect with his outside army.