I was White and told myself: "Don't consider the base too much. Play light moves. Put some stones here and go somewhere else, which can be cut and trade off the territory." 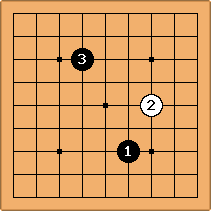 Black is a middle dan player, so at the opening, he did not much concern about the linkage between his stones. He played a classic Dosaku's opening, with

is now being pressed lightly. The urgent task is to strengthen

. It seemed to White that Black's strategy is to make no effort for territory building, but to put pressure on White. Moreover, the shape of black stones look balance: Neither too defensive nor too aggressive. 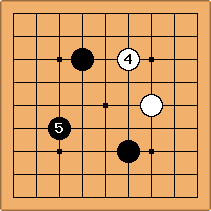 , and Black happily occupied the corner with

. Up to this point, Black has mapped three forth of the board, which forces White to do something reducing the large potential territory of Black. 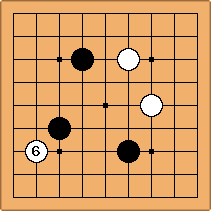 is a strategic move. It is ready to die, seeming like a stupid self-killing move. Don't try to help

. This is a light move strategy, employed to destroy the potential territory of Black only. 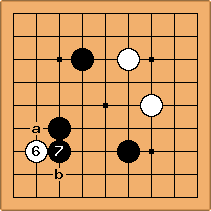 makes it difficult for White to help

by playing at a or b, which will result in a heavy white group. Heaviness causes greater loss and inefficiency of territory development and situation control. 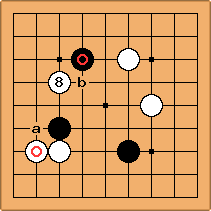 is that if Black blocks at a, White will attack

at b. And, if Black blocks at b, White will help

at a. Black needs to make a decision on whether he want to attack