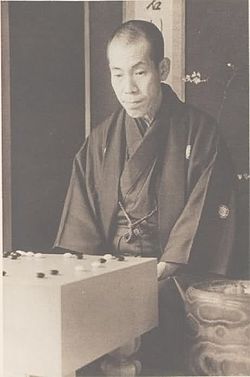 Segoe Kensaku (瀬越憲作, 1889-1972) was a professional go player, first at Hoensha, Hiseikai, then in the Nihon Ki-in.[1] He achieved 8-dan in 1942 and honorary 9-dan later. He was the teacher of Go Seigen, Hashimoto Utaro and Cho Hun-hyeon. He helped publish more than 100 books in his lifetime, including Tesuji Dictionary and Go Proverbs Illustrated.

He became a professional at the age of 20, and was immediately promoted to 3 dan, on the basis of a 4-2 victory against Suzuki Tamejiro. Prior to this point, he had met some professionals, but never had a teacher (Fairbairn, The Go Consultants, p. 75).

Segoe was the official referee for the atomic bomb game.

In 2009, Segoe was inducted into the Nihon Ki-in Hall of Fame.

[1] Segoshi Kensaku (an alias for this page) is an alternate reading of Segoe Kensaku. It is considered incorrect by John Fairbairn. However, it appears in some Japanese and English sources.