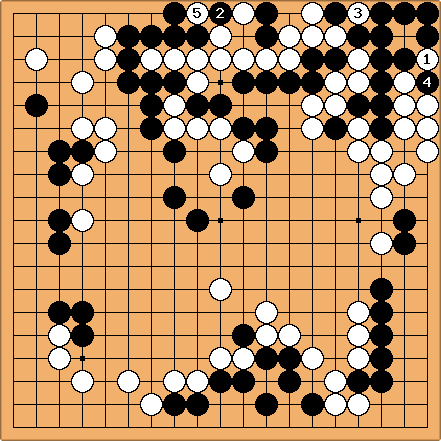 Kato Masao got lucky in the 14th Judan. In his match against Cho Chikun, the result was void because of this triple ko. The game was replayed, and Kato won the rematch and went on to win the title.

zinger: A fascinating position! But why is it said that Kato got lucky? Black seems to be doing just fine elsewhere on the board.

knott? Can someone explain to me why White simply cant fill the ko with 5? Is it a liberty to many in the example for the white group, I simply dont see the triple ko in this case. 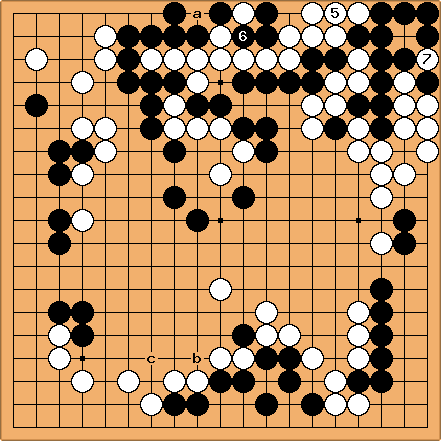 Herman Hiddema: If, instead of taking the ko with

at a, White fills the other ko with

and White takes with

. Now the situation is a direct ko. White has only two liberties. Now Black has to find a ko threat (b or c, for example).

So White has this option, but if White does not think he can win this ko, or if the loss he has to take to win it is too large, then he is better off retaking at a with

So White has the option to turn the ko into a direct one, while Black has no such option. If White feels that he would lose if he made direct ko, then

is the logical option, forcing Black either to concede the ko or to acccept no result.

This would also call into question whether Kato got lucky.