This is the replay of the preliminary game between Gu Li and Lee Sedol after their incredible tie due to a quadruple ko. Gu Li is Black. 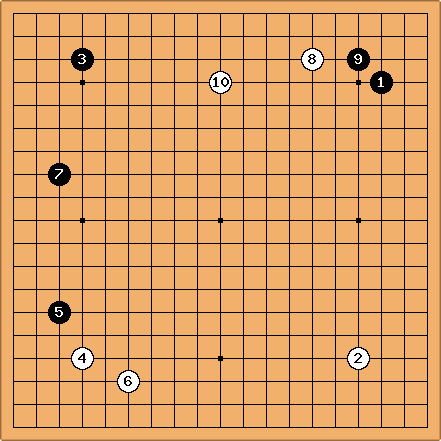 is known is known as the micro chinese pattern. These first 10 moves are the same as the 11thNongshimCup/Stage 3 Game 3, where Gu Li was White against Lee Changho. 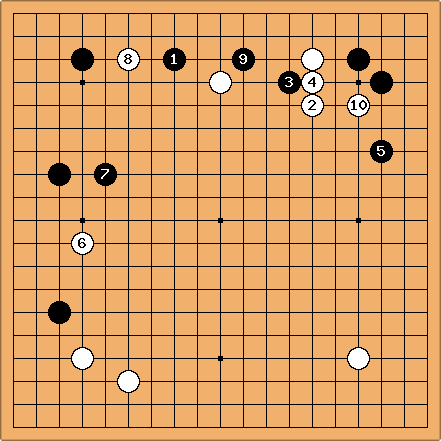 Apparently this is a well known opening pattern and Gu is interested to know Lee's reply. Lee quits the aforementioned opening at

. In the other game, White (Gu Li) played 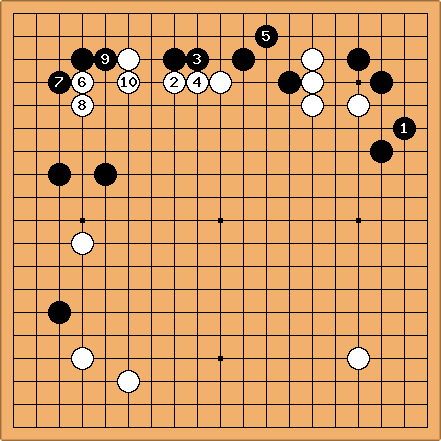 The game unfolds quite differently, with White still taking influence against Black's territory, but Black is much lower here while White's influence is not working for him. 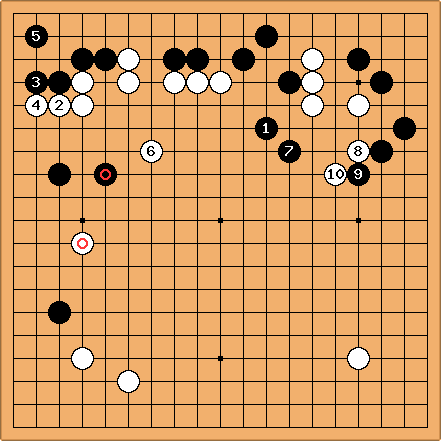 exchange has brought forth. 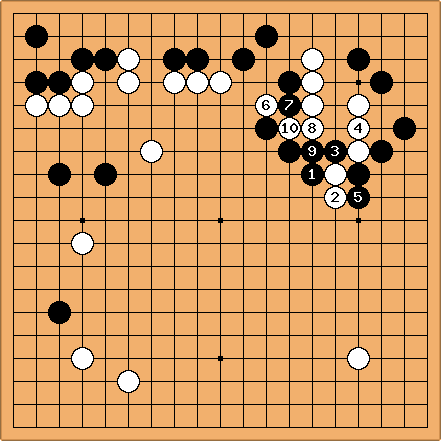 the corner stones are split off and from this point onwards a long, drawn out struggle starts, evolving about these stones, whether they should be saved or sacrificed on a grand scale. 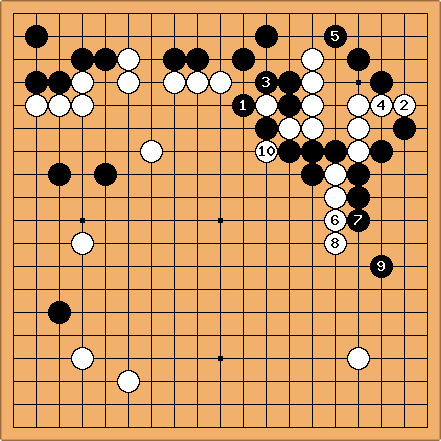 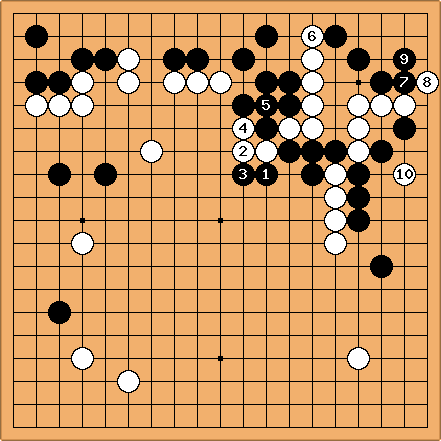 The battle spreads into the corner ... 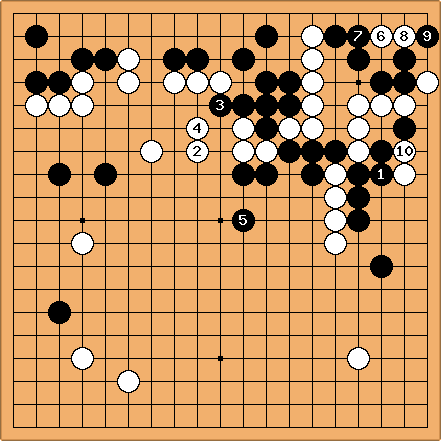 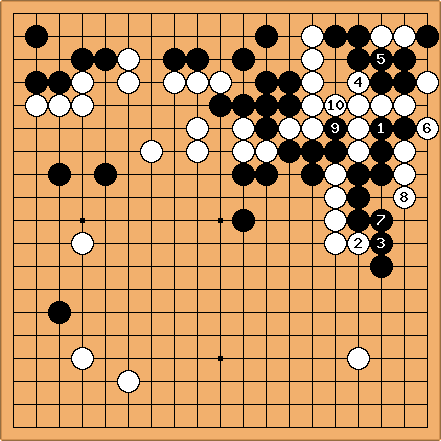 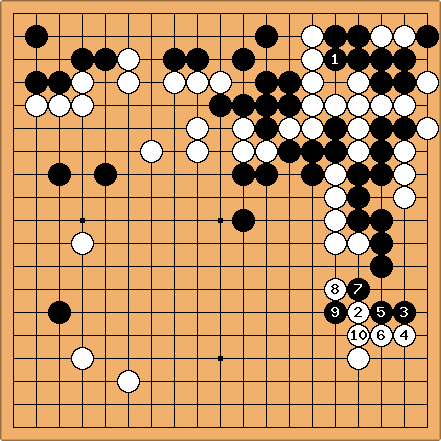 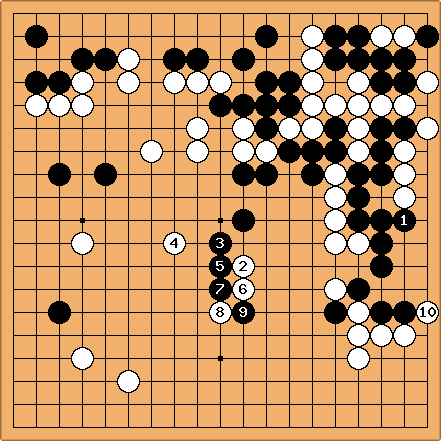 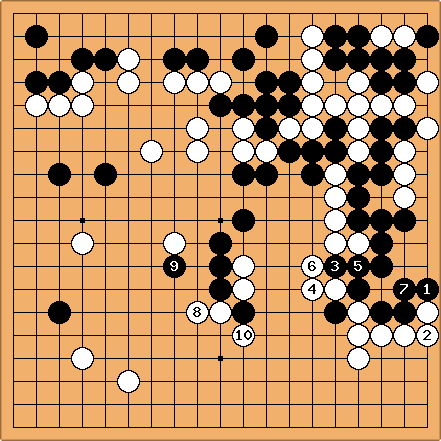 decides to sacrifice on a grand scale and build a huge moyo at the bottom as a compensation. One can sense that White does grudgingly so. 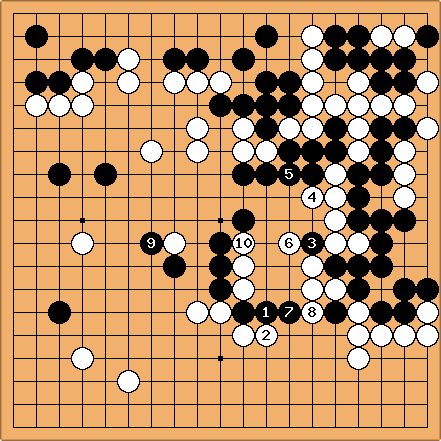 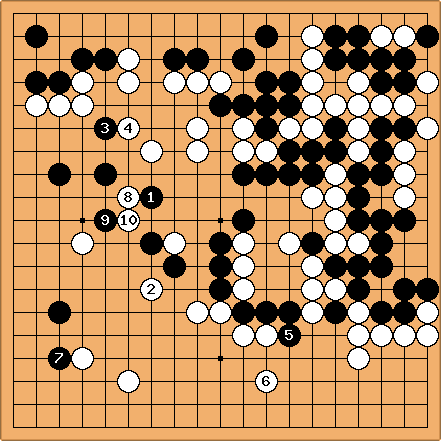 looks like terrible aji keshi but Gu Li must have judged that the bottom was not possible to invade anyhow and increasing liberties here would prove vital to the centre stones. Black maintains the initiative with

. White decides to fight back with 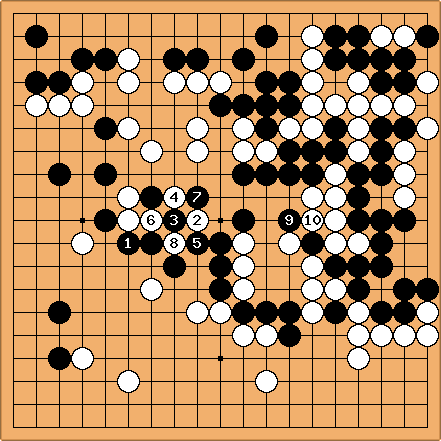 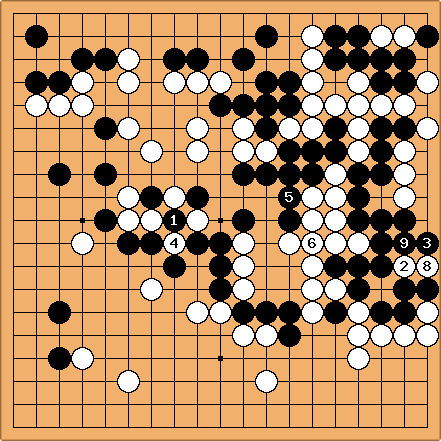 A ko fight arises but Black seems to have thought through matters. 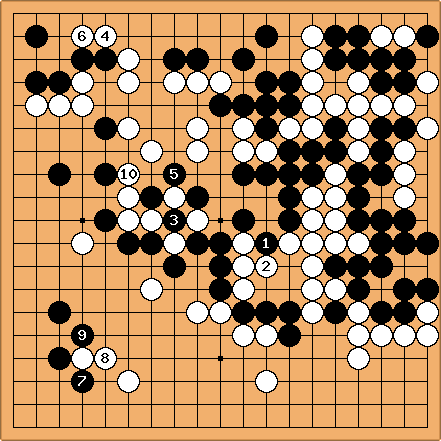 and a ko exchange takes place, Black becoming very strong in the centre, in exchange for giving up the upper left corner. The sente that invariably results from winning a ko, is used to further reduce Whit's bottom and expand the lower left corner. 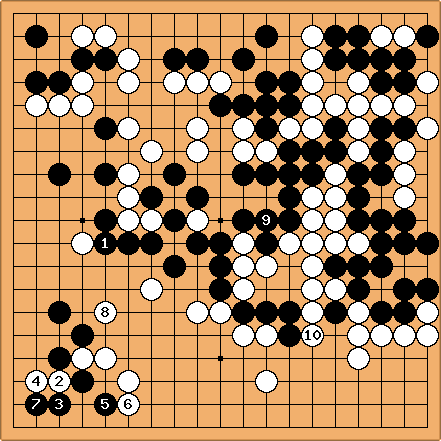 connects, it is hard to see how White will win this game. 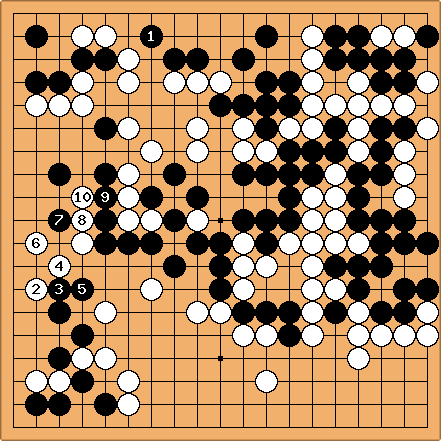 Especially since Black has

up his sleeve. This endgame sente is another hidden gain from the ko fight: White did not get this corner for free and must answer. However, White launches a counter at

in an attempt to turn the tables. 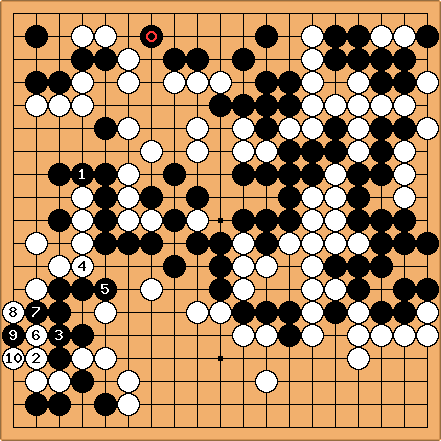 And White seems to succeed! While Black has to play the almost neutral connection of

was an overplay or badly timed. 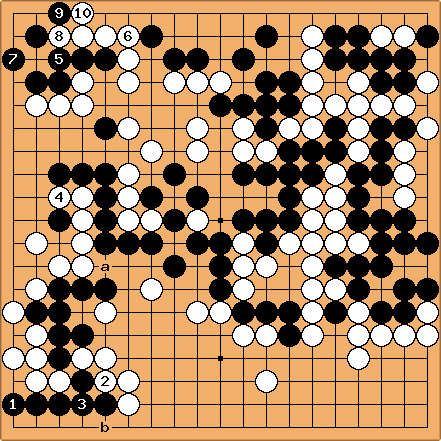 Or maybe not ... Black finds a way to keep the pressure on. He then abandons the lower left to revive the upper left with

, leaving either of his groups at the bottom killable but not both: a and b are miai. Or is there more to it ... ? 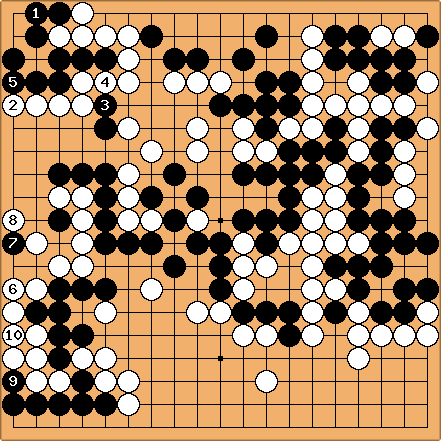 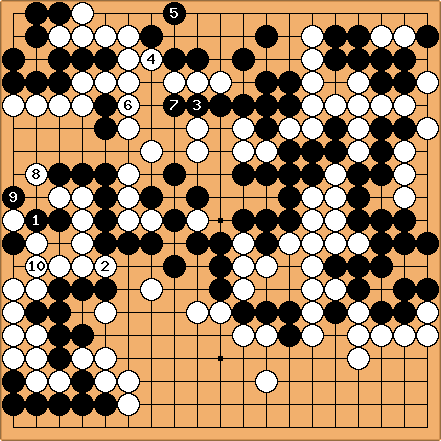 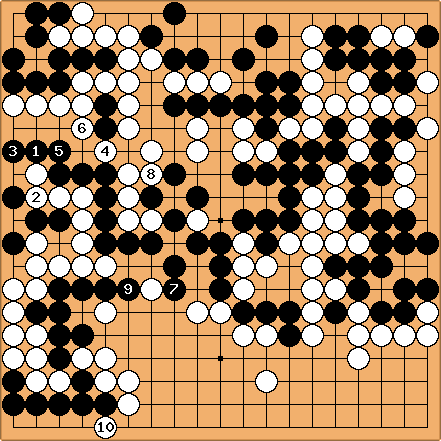 set up a shortage of liberties so that

not only saves one of Black's groups but moreover forces White to capture the black corner stones, starting with

! The miai savings have turned into a masterplan. 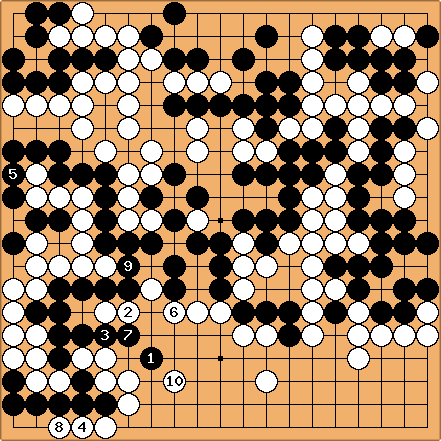 Black now further uses the aji in that area to reduce the biggest White territory. 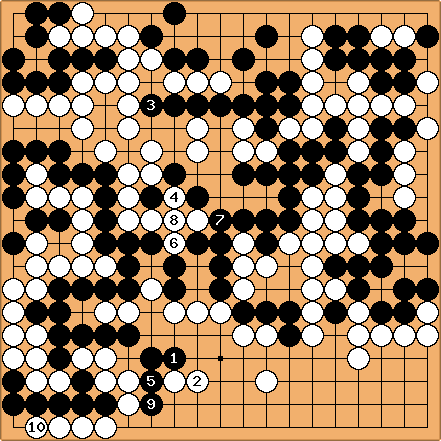 the game seems to be decided. 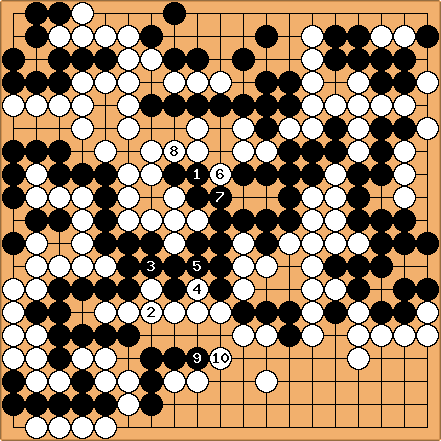 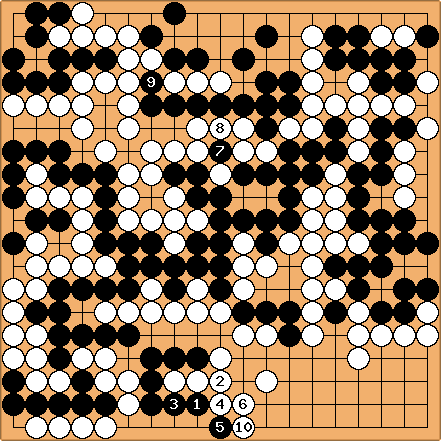 The reduction goes as far as 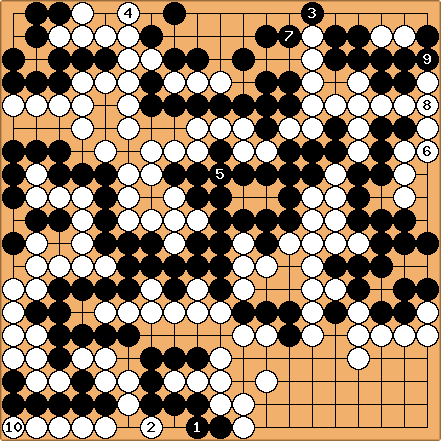 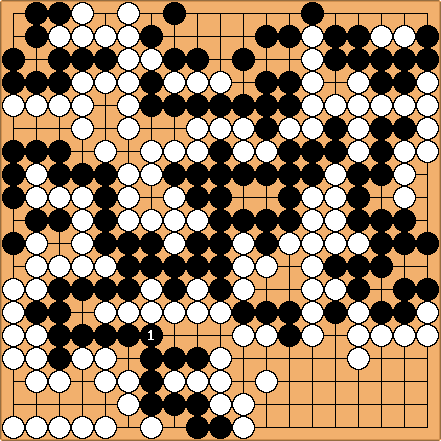 I (Dieter) would surely like to see professional analysis of this fantastic game.