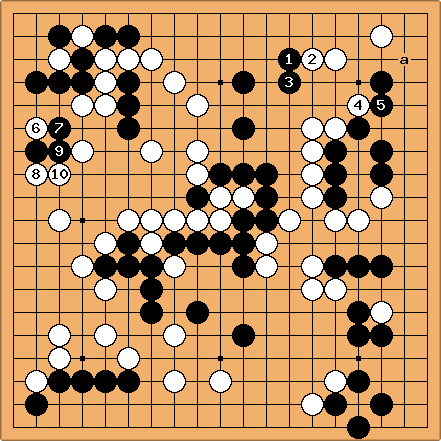 Dieter 119: Yose time it is. But Black has more yose plays.

HolIgor: 118: I've decided to play gote here. It seems to me that Black will not be able to afford komi.

HolIgor: 116: It is difficult to say if this is larger than a move at the bottom.

MikeNoGo : 115: This is the obvious answer right? Threatens to cut with an atari if unanswered and secures Black's territory down below.

Question to 114 (HolIgor). Advantage of the move is obvious. White ends in sente at the top but white loses something with that exchange as a is not sente any more and White could be forced to live. How can this be estimated?

HolIgor: 112: White has to defend against the cut.

JamesA: I don't know about move 110.... Why do people keep playing moves without any comment, and without giving their names? I think White should have played somewhere like x, y or z while there was still a chance. I don't think there's any chance for White now, really. Any thoughts? 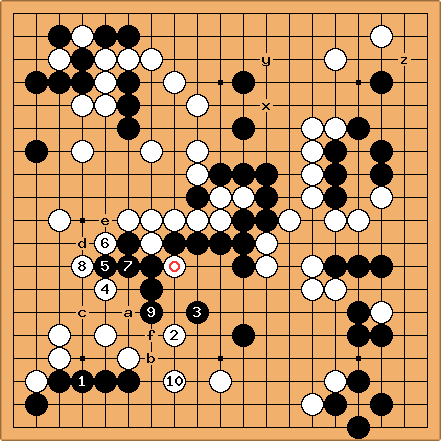 dieter: Black 109: tempting to play the atari, but let's leave it as aji.
Bill: Somehow my eye is drawn to a for 109, aiming at b and c.
Unfortunately, neither threat really works, does it?
However, it does work better with d than 109, doesn't it? :-)
dieter: I think d isn't really important.
dnerra: I would think that Black d has to be answered at White e. However, with or without this exchange, I do not see what Black can gain from a if White answers at f.
Bill: I guess White f would make Black d fairly urgent. ;-)
dnerra: Can you explain a little more what you mean? Sorry, I don't understand yet. Black a, White f, Black d, White e: what next? 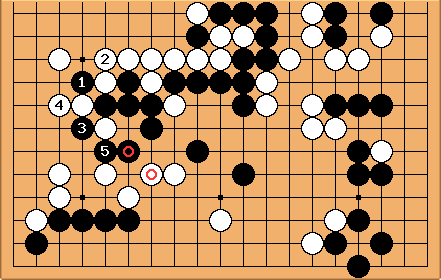 Bill: After the exchange of marked stones, White threatens to capture Black's stones on the left. Black's marked stone works with Black 5, preventing a double atari. 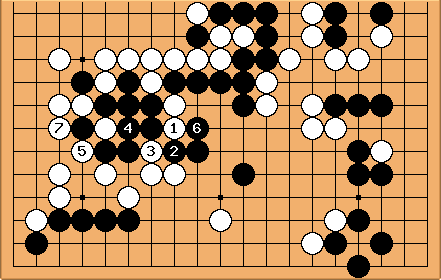 Now the capture at Black 4 yields a much needed liberty. (The real life sequence is White 5 - Black 4, White 7.)
As Dieter points out, this is not a big deal. The kosumi may not be as good as his Black 109. But I have had my eye on that point since Black 97, -- well, actually, since White 82 -- and finally wanted to say something good about it. ;-)

dnerra: White 108: Although I have played Black before (that was a while ago), I might be allowed to make the obvious move for White.

AvatarDJFlux B107: Dear Mike_no_Go, I believe everybody is welcome to play in these rengos, in the true philosophy of this site! From 9p to 35k... A rengo is a rengo is a rengo, otherwise I myself wouldn't dare to play%%% After all, isn't this supposed to be fun? ;-)
There! Nobody is playing, so I play again, making horrible shape! Please do not be too hard on me%%% P.S. How come nobody plays for Black in the New Year's Rengo 2002? After all he's ahead there, or so it seems...

AvatarDJFlux: Black 103 Well, if there's nobody to volunteer I'll play...
I just wonder why the last two or three moves haven't been "signed"...
One question to strong players: couldn't White have pushed down below 92 and escaped neatly? If I'm not wrong (recently this happens quite rarely...) Black 97 was a bit of an overplay...

HolIgor: White 2 looks for complications or for a suitable moment to resign. I am ready to continue to play yose for White in this game, though. 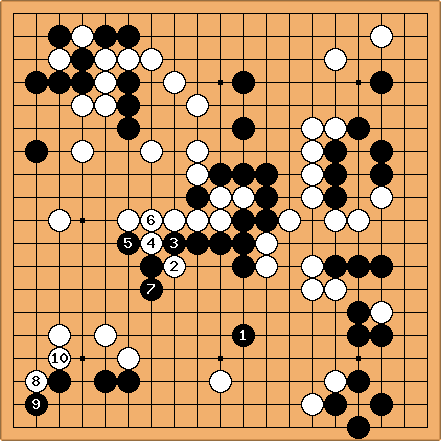 HolIgor: White 98: Just for shape
Dieter Black 97 Black 99
AvatarDJFlux: Black 95, hoping it will be of some use later...

JamesA: Is there another move?

AvatarDJFlux: How come I always get to play the obvious (in my very humble opinion) moves? I hope this 93 is not too insipid... Dieter, I like your overplay at 91 a lot! Yum yum!!%%%

JamesA: Does this White 92 work? I think White can make a fair bit of territory on the left side now. Is it correct to treat the stones on the lower side as light?

BillSpight: That's better than treating them as heavy. ;-)
White is very busy.

(91 brought to you by Dieter's Notorious Overplays) 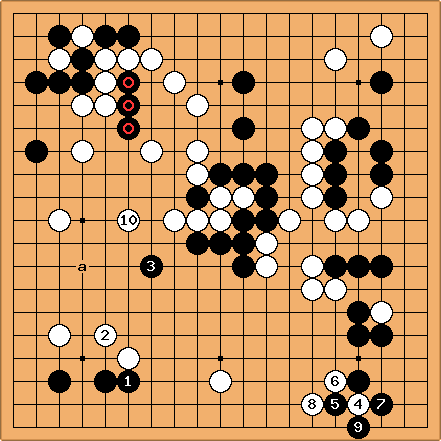 JamesA: I played 10 because I was worried about White's thinness here and to prepare for a possible attack on the central black group. Hopefully, White will make territory either around the lower left or in the upper right, but maybe that is just hopeful!

unkx80: To JamesA, the white group is very thick, the group is all connected together and the three marked black stones are as good as dead. If I had to play 10 in this area, I'd play at a instead.

AvatarDJFlux: Here I am, intruding again... Well, looks like an easy one! Still, as Black, I would have played 5 at 6, letting White live small in the corner and building some influence: I think that being ahead in territory Black could have afforded to lose some in order to help the weak group in the center. As it is now, Black has even more territory, but his center group looks a little weaker to me... Am I wrong?

Dieter: I think the additional thickness/influence White gets, overlaps with the influence of the group coming down from the north. Black has over 40 points in territory. His central group can't be called weak any more after Black 83. You may be right about 5 at 6 though, since White can't probably even live in the corner anyway (due to the extra stones). Let's analyze this at OngoingGame2 Lower Right Probe Analysis.

Dieter: Switching sides to Black, after having waited for a month for Black to play. (Black loses on time !!!). OK, HolIgor, I guess it's between you and me now.

HolIgor: I waited for several days and made a consecutive move. I don't see how White can win this game playing defensive moves. White needs to put a stopper of some kind for the extension of the lower left black territory. White 84 is intended as a probe.

AvatarDJFlux: Sorry to intrude on this fine game... I hope not to have spoilt any plan of the other players! Black 83 looks important to me for many reasons: it develops Black's position: he's still weak while White is doing fine with her group to the right (Black is ahead in territory so maybe can afford not to directly build any more). Somehow it keeps in check White's moyo to the left: imagine a white move here! (Actually, if I were White I would have played right here with the move White 80...); it may aim at something aggressive, but I shall say no more... ;-)

I await your criticisms... Thanks everybody!

HolIgor: I guess that this is not what White planned with the shoulder hit 80. I don't want to leave any holes behind though.