OngoingGame2 reached this position after 90 moves. 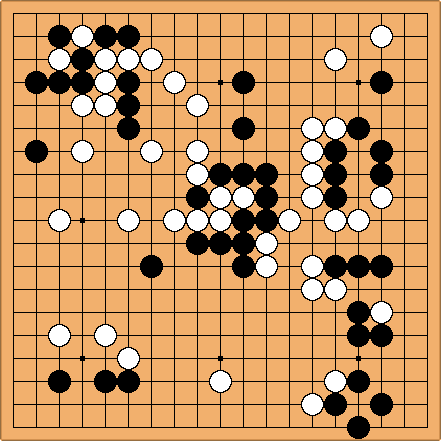 A few moves later an interesting opportunity arose for White which unfortunately was not taken. As there has been little or no discussion of the moves made after this I would like to start one off here!

First, I will have a go at analysing the current position to see where Black and White stand (positional judgment.) 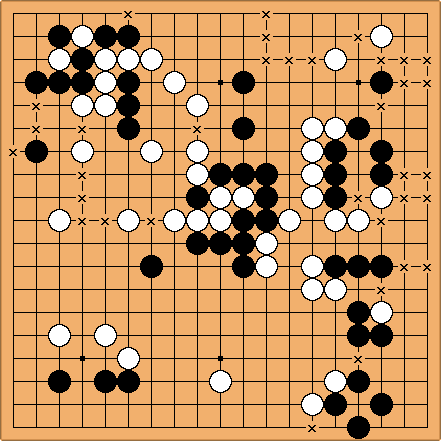 Having drawn some boundaries in, assuming certain endgame moves, this gives the following territories:

These territories do not include the left, bottom, bottom left and bottom centre areas, as they look too unsettled at the moment. What this means is that White needs to make about five points more than Black in the remaining areas to be in the game. Also, White may be able to reduce Black's top right or bottom right more than I've allowed.

Of course, Black's bottom left is going to make some territory, but the important thing is what White can do with the left-hand side and the bottom. The weakness of Black's central group seems the only way to try to achieve this. 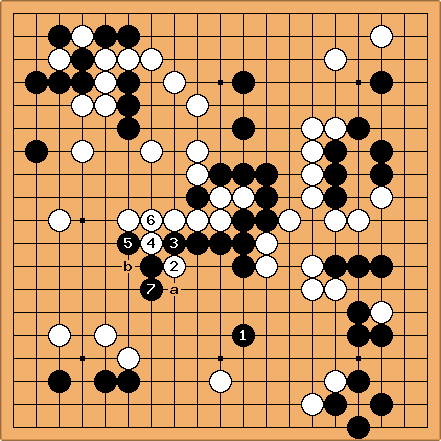 This seems OK to me until Black 97. I think this should be at a, after which White can play b in sente. This was the point of 92. Since Black played at 97, surely White must play at a herself and fight. 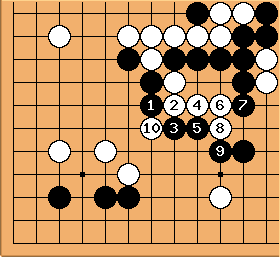 Here is one continuation. 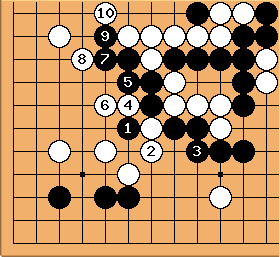 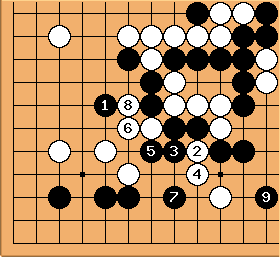 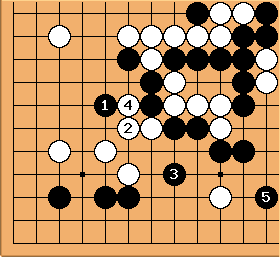 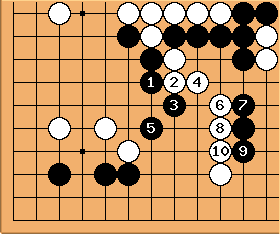 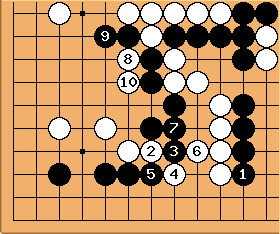 Given that Black needs at least two moves to really take the bottom, I think White should have fought this way. Any thoughts/criticisms?

dnerra: In German, we have the beautiful word "Besserwisser" (besser = better, Wisser = the one who knows) denoting that type of slightly arrogant, unsympathic guy who always corrects others believing he knows better. Very useful word with regards to Go kibitzers, and I fear I might fall into that category far too often :-) Anyway, let me try to go ahead as a Besserwisser here, curious whether someone else really knows better :-)

I had wondered about that possibility as well, but I came to a different conclusion: 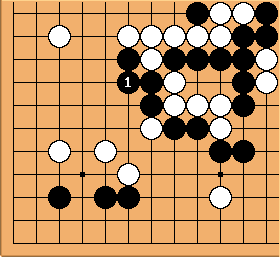 What can White do? 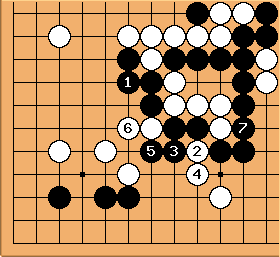 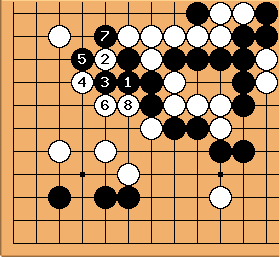 (Black 9 at 2) This is more complicated, but I do not see a way for White to succeed.

OK, someone else's turn to prove me wrong! 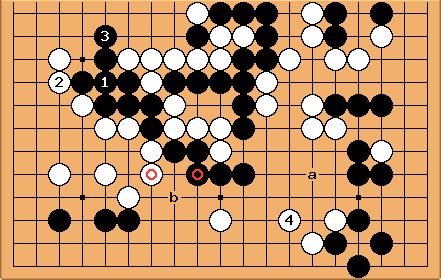 JamesA: Thanks dnerra, looks like you're right! Just to check out one last thing. Assuming the exchange of the two marked stones can White play 2 then 4? How do things stand then? The white group at the bottom can connect out with a or b I think. Black is probably still winning though. 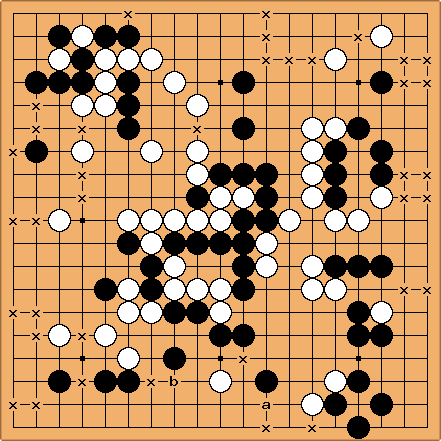 After komi, I make it around 71 for Black and about 70.5 for White, and White has sente. I wonder whether White could use that sente to create a living group at the bottom, perhaps with moves like a and b? 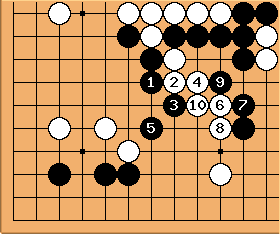 DaveSigaty: My thought would be for Black to make half an eye in the center with the 9 - 10 exchange and then connect on the left with 1 below. Black's center should have no trouble connecting to the right or living and Black's lead is secure. What do you think? 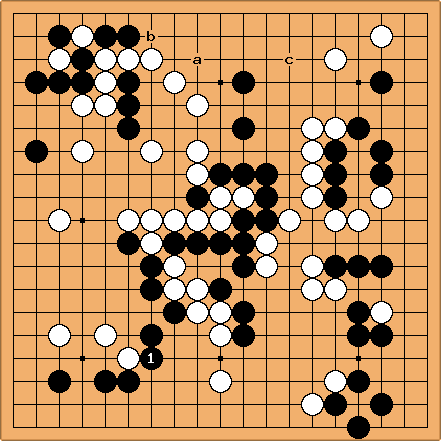 One of the fundamental problems that White faces in this game is that she would like to attack Black's center but Black a at the top threatens to connect and c looks at exploiting the defects in White's position in the upper right. The combination of a and c give Black the start of eye shape at the top so it is not easy to see how White might kill Black. 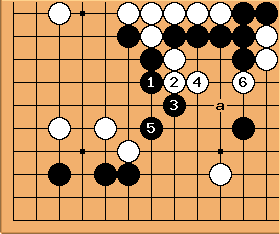 White 6 at a seems to be something that Black can handle. I think that the real question in this line is what happens after White 6 here. 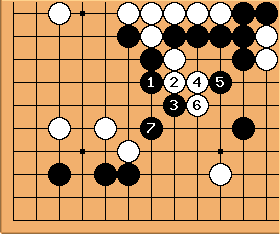 Is this a better order of moves for Black? What is the continuation? 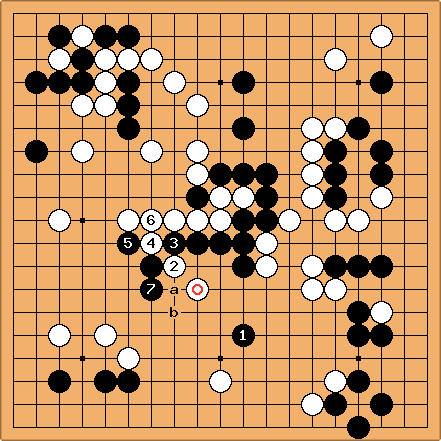 AvatarDJFlux I agree that White missed an opportunity (and therefore Black 97 was an overplay: see my comments at move 103 in the OngoingGame2). I nevertheless think that White's toughest move is not a but the marked one. Another tricky one could be b.
In all the variations I have tried out, either Black gets a false eye there (which might not be fatal, because of the aji at the top mentioned above by Dave but still I would consider it a bad result), or he loses the stones 5, 7 and the one above 7. For instance, can anybody strong have a look at the following starting diagrams? (There are of course other variations...) 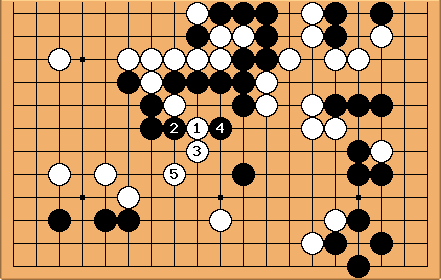 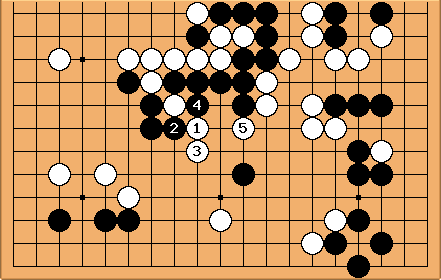 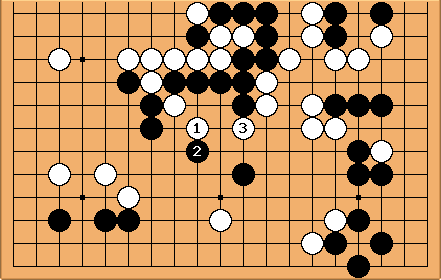 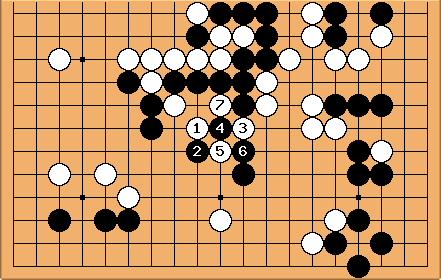 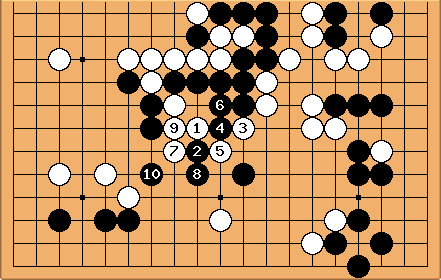 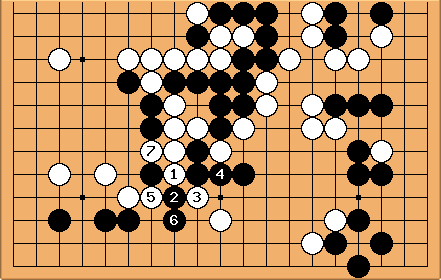 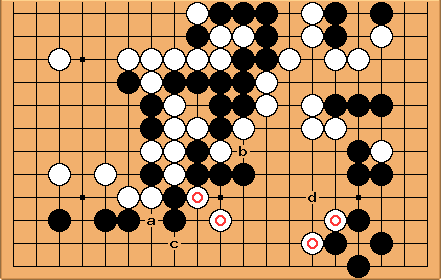 In this case the problem is: will Black get the whole bottom, capturing the marked white stones, or the aji of white moves at a and b is bad enough to enable White to live locally or to connect above???

dnerra: As a general remark, I think this discussion is quite worthwile. While a fuseki discussion[2] might be conceptually more interesting, I think that in this phase of the game (late chuban, also later in the early yose) quite a lot of points are lost in actual games. A wall facing the wrong direction means a loss of 2-5 pts in fuseki; here it can mean enclosing 5 instead of 20 pts of territory.

The combination of White 1 (this is supposed to be bad shape! :-) ) and White 3 above looks quite cool; it did not occur to me although I looked at the position for a while. Here is what I would try as Black: 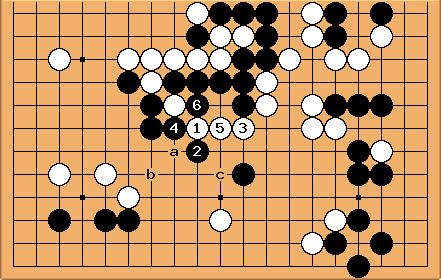 The cut at a looks tricky, but I think it can be answered at b. Still, I think this is a success for White. I would probably play c next.

[1] Censored so as not to interfere with the ongoing game :-)
[2] Oops, shouldn't forget to mention that the same is true for a yose/tedomari/ko discussion :-)) Cheers, Bill!