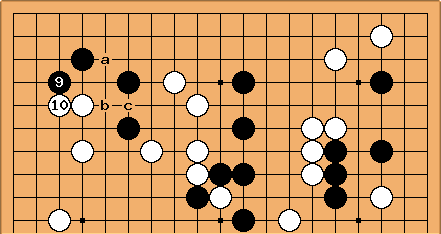 DieterVerhofstadt (1k):
If Black 39 , then I'd probably answer at 40 here, aiming at a. In any case, White 40 at b could be answered at c without any problem.

MortenPahle (10k): (Not an excuse, but an explanation:) I saw this, but I thought that this also leaves white completely settled on the left - her group and territory are safe. I realised that the keima was thinner, but didn't think that White would be wanting to cut, since it would mean giving up most of her group. However, I did think Black would end in sente, which he probably will not...

I think Bill meant this diagram for move 45.
(Bill: Right you are. :-) At first I thought this was better than a gote play by Black, but the gote is really pretty big.)
Black takes the upper left with 49, and White 50 connects underneath. But Black has sente and the position contains a lot of bad aji for White. In particular, Black a, probably not immediately, leaves White with a heavy burden.

MortenPahle: Doh! When I looked at this line, I imagined that White 8 at 9 would actually recapture the corner - but after some more reading I see that that is wrong.

This what you read ? (Couldn't resist) --Dieter

No, it was more like this. After 5, White and Black both have three liberties, but Black needs more approach plays to capture, so white wins the semeai. I'd not 'read' the black play at a threatening capture or connection+capture ... --Morten

Black 6 is a play to know about. It comes up quite often. 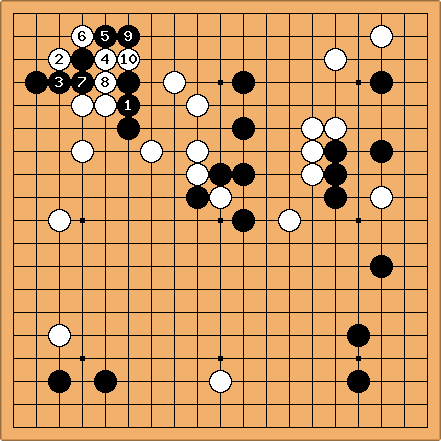 MortenPahle - The question is whether there's anything left to strike once the fist is made ;^)

MortenPahle: Hmmm. This can get tricky. Black 39 may turn out to have been greedy.

HolIgor 42: Black has taken the corner. It is an established fact. White's intention is to either limit Black in sente or make a furikawari. I wonder why Black did not play at 3 on move 39 instead?

DieterVerhofstadt: Yes. IF I played in that area, I'd indeed play at 3. The keima leaves a weakness.

Bill: It looks like Black 45 will end up with gote. Maybe it would be worth it to play at 48 and take sente.

MortenPahle: I don't understand your comment, Bill. Can you elaborate?

Holigor 46: I thought that White should not determine the position at this move and try to keep a little ahead of Black. (--Dieter: you're probably right. I thought this way there would be more aji.)

MortenPahle: At the end of this sequence I am not sure how to continue - I have the feeling that White has thwarted my original intentions, but I take the risk of putting my head on the block and continue what I started .... Just for my continuous improvement, can one of you give me an example of what could have happened if Black 39 were at 43? 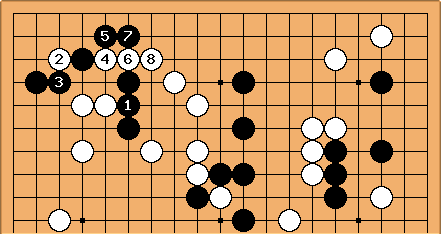 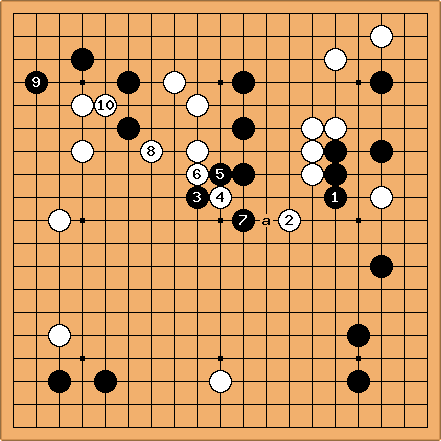 Bill Spight: We seem to have stalled, and at a very interesting point, too. ;-) Too much kibitzing? I would find that inhibiting, even though I would be glad for later discussion.

White fell behind early on, but the center fight offers possibilities. :-)

HolIgor: It seems that Black resigned.

Bill Spight: Black 37 at a is also a thought.

MortenPahle 39: Make a fist before striking :-)