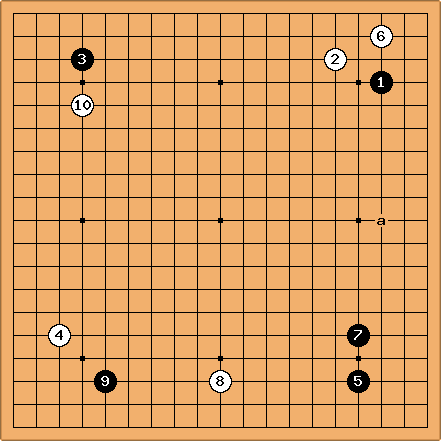 : This cannot be too bad.

: Please, comment and criticize moves. If we talk while we play we can learn something. At the bottom everything is miai, so the big moves are elsewhere. The biggest points are: approach in the upper left corner; and a, setting up one more pair of miai. I think that the approach is more important.

is kikasare. White has gotten pushed around.

is a good play, preventing a double enclosure.

. What is kikasare? I don't know the term! I thought

was an interesting move as it prevents Black from attacking at the top and unsettles Black's top right stone. I'm happy to learn different though!

BillSpight: "Kikasare" is the passive form of "kikashi". Literally, it means made ineffective. I like to say, "got pushed around".

was a thoughtful play, but compare the result with this position, which is roughly equitable. 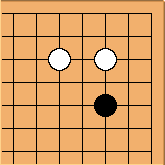 White is around 4 points better off in this position.

JamesA: Thanks Bill! I see what you mean. OK then, how about playing a similar move in the lower left corner for Black 11. Wouldn't that give Black the option of good moves at a and b below? I think it might be a good way to retain the initiative.

HolIgor: If Black had played san-san first and White approached at

wouldn't Black want to play at a?

JamesA: That looks convincing. However, doesn't that mean that

was a move without promise? What can Black do with

that is effective and useful? I think that Black 11 is playable because it is very solid, even though it may be a little inefficient. Doesn't there have to be a broad strategic point to every move in the opening?

BillSpight: And here I thought that

was the game-winning play. ;-)

On the other hand, if White gets to play at e, Black would need to answer at somewhere like b, which White would follow with d.

Therefore, why doesn't Black play e now, while it threatens the

stone? Black could then look forward to playing the Black c, White a sequence in sente.

However, as HolIgor pointed out, if a black stone at e was approached by

, Black would probably answer at f rather than at

Bearing in mind these factors, doesn't that mean that

was an unpromising move? 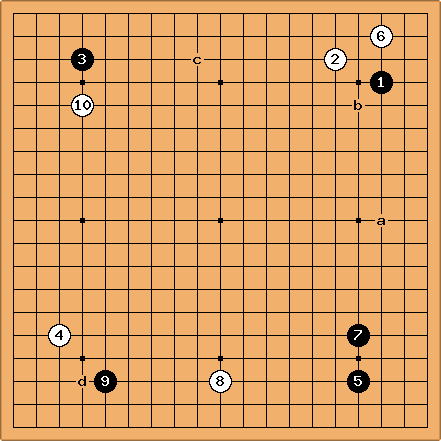 The first move I found somewhat strange was indeed

, White has declared a slight preference for influence towards upper and left sides. I would have played the taisha joseki.

indeed seems called for to prevent the natural extension from the black lower right enclosure. However, as Bill pointed out,

, and preventing the enclosure in the lower left corner, are miai. Therefore, I would have turned

into a good move by pressing at b. If Black makes a second enclosure then with

(or to the left of

Still, Black comes better out of the opening than if White had played the taisha joseki. For one thing, he can exchange

for d , and then make a double wing formation at a, meanwhile threatening to draw out

Bill, can you explain

? I think a lot of players would rather have played at d or the 3-3 point.

JamesA: I thought Bill was saying that preventing White playing at d and making an enclosure in the top left were miai? I think

was essential. I agree that

wasn't good, and I accept blame as I played it!

BillSpight: Sorry for being so cryptic.

is a clever play (an approach in the top left corner is usual). If White makes an enclosure at d instead, then Black can extend to

, threatening a double wing formation or a double enclosure, and preventing White's normal extension to

makes a second enclosure, White can make the enclosure at d, attaining the ideal extension from the enclosure and threatening a double wing. This is playable for Black, but I think that preventing White's enclosure is bigger.

If Black plays at the 3-3 or d, White can enclose Black and form a wall that works with

. If Black plays on the 4-5 point one point above

, White can play at d and Black's subsequent position is crowded.