In nearly all cases, the best move for either player in this situation is tenuki; there is nothing at all urgent here. However, black b can be a ko threat; if white does not respond then black can save the three stones. White a can also be a ko threat. 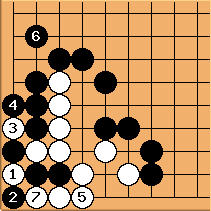