Extension From a Wall

In Chinese, this rule is described by the following: 立一拆二, 立二拆三, 立三拆四, 立四拆五. Notice that all of these have the form 立(N)拆(N+1), where N is an integer from 1 to 4. Here 立 means a vertical chain (with respect to the edge), while 拆 means extension. Although we can also have 立五拆六 by applying this rule, but this phrase is rarely appled because a 6-space extension may be too wide.

From a wall, the best extension is the number of spaces of the height of the wall, plus one.

It is also embodied in the following proverb:

From one, two. From two, three.

This rule can be applied to walls of heights one to four, and in rare occasions, five. Extensions of more than six spaces are very rare because an invasion is likely to succeed. 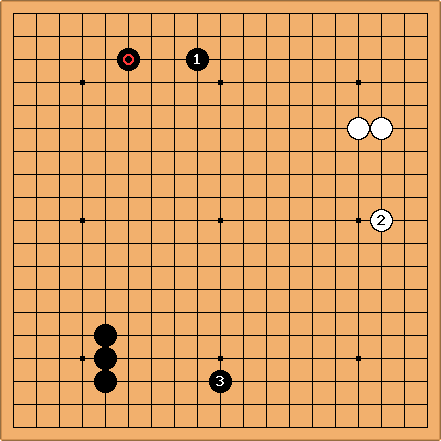 For the analysis as to why these extensions are ideal, we refer to the specific pages about these extensions. Basically, they are the farthest extensions on the third line which cannot be broken without the support of nearby stones. 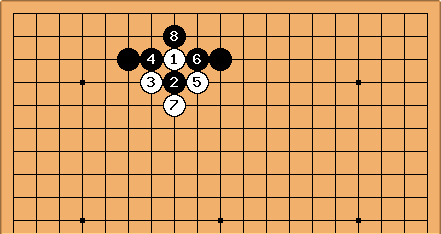 The only way Black can prevent being separated is by granting White a powerful ponnuki on the third line.

Note: The usual response to 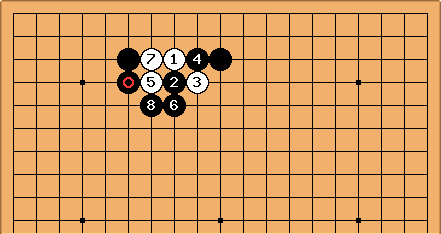 With the marked stone, separation is not possible at all, neither gets White a good result. Of course, White stones in the area will influence the position.

There's an interesting quantitative point here: if the area of the framework defined by wall plus proper extension from it really goes up quadratically with the height of the wall, we have various possible conclusions, such as

Actually there is no reason to think any of these statements is completely misleading - all perhaps aspects of the truth.