The cut may work, but often the damage to your own stones is bigger than to the opponents': 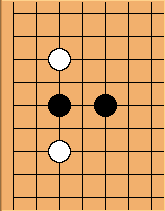 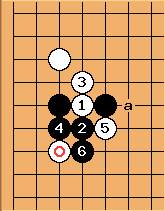 could also be at a.)

Black gets good shape, and while White is busy defending

, Black's shape will get even better. 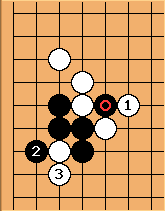 I'm beginner and I don't get why this sequence is bad? Haven't the two black stones been cut, and 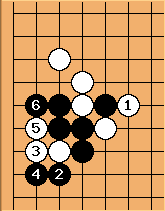 here instead, the white stone is captured, giving Black a good result - especially since he does not have a base in the starting diagram - Andre Engels

Bill: In the old days, when you had to walk a long ways to get to the Nihon Kiin, I used to kibitz pro games occasionally. I remember watching Fujisawa Hideyuki and somebody and wondering why the attacker of a group did not cut a one-point jump. It looked like it worked to me. Unlike the example above, the attacker was stronger. And sometimes you do see such cuts in pro games. But they are rare because in the context of a large-scale attack, they are too small. 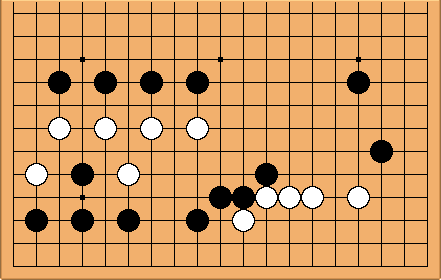 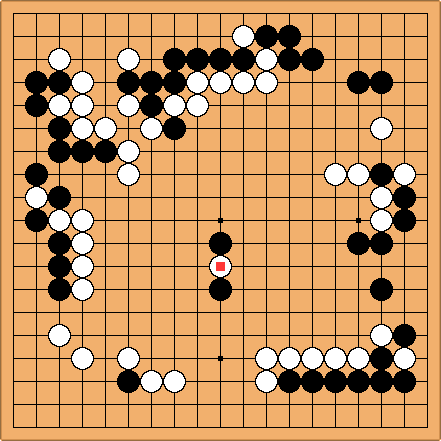 Looks to me like a better proverb would be "don't cut the one point jump if you have nearby stones". ~srn347

TheBigH: Can someone explain to me what Lee Changho was thinking with this move? Black's obvious response would be to atari from the right which not only forces W to extend but also helps the three weak stones on the right. It just looks like an outrageous way of equitably dividing the middle region while simultaneously giving up the initiative, so there must be some deep strategic point I'm not seeing. Thanks.

DanielTom: Actually, this move is a rather common tesuji. Its goal is very simple: White wants to cut the opponent's stones (and get cash by attacking). Of course this tesuji only works well when you have a very thick position around.

thanatos13: Therefore, the proverb should be "only try to cut the one point jump when you are as strong as a Big Grizzly Bear on both sides."

TheBigH: I get it now. Even if B ataris W can still permanently separate B's stones. Admittedly W is cut in half as well, but those two groups can flee to the safety of the ginormous walls W has everywhere, so B is worse off. Thanks for the explanations.