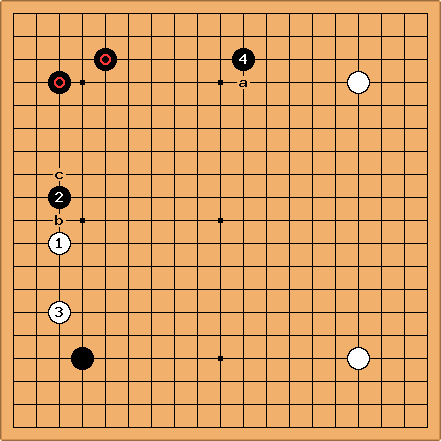 It is generally accepted that

is misplaced, however opinions on the severity of the error differ. In any case

in this diagram feels ideal, and the follow up at 4 or a would make a very large framework. So White 1 is recommended at b, so that Black can only extend to c. 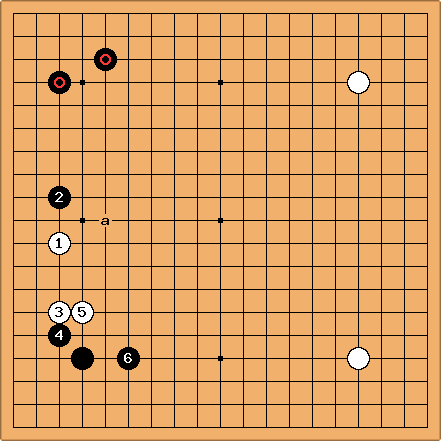 In the second diagram

became a inducing move leading to

while white looks cramped here. Imagine black at a later. (Taken from BlockOnTheWiderSide#1) 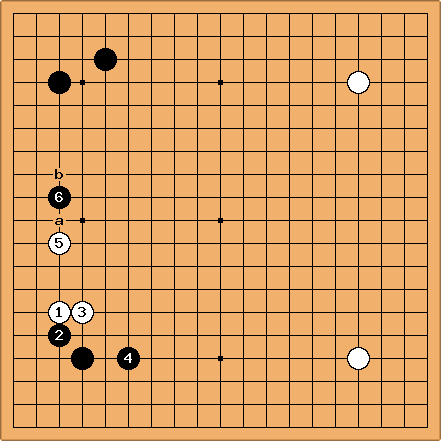 all these moves are acceptable. But the exchange of

favors black, white would more likely have played at a (which may be answered by black at b). See here.

Dave: In the final of the 56th NHK Cup, broadcast on 2009-03-29, Takemiya Masaki played the improper wedge at the marked point against Yuki Satoshi. The game proceeded as shown below. Yuki next approached the upper left corner at a. In the end Yuki won the game and the title by resignation. Takemiya was appearing in the final for the first time in 20 years (he defeated Kobayashi Satoru in 1989 for his lone win in the NHK Cup). He has now finished second five times. Yuki lost to Cho Chikun in 2007. He became the first Kansai Kiin player to win in 24 years. 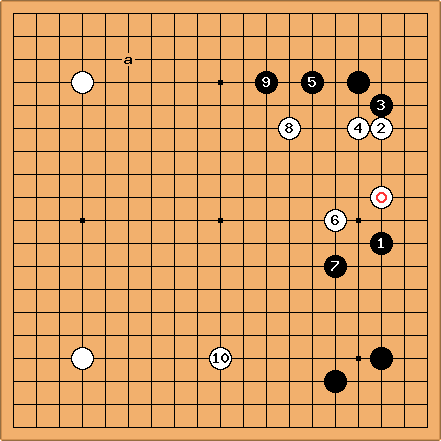 There was no discussion of the choice of wedge in the commentary (by Otake Hideo) or in the post-game discussion. The comment on

in the diagram was that it was natural to play here instead of making san-ren-sei on the left side due the black framework on the right.

John F. Wow! Of 894 examples of the first five moves in the GoGoD database, I expected some at least to show this "improper" wedge as the follow-up, but there is not a single example! I'm half thinking that Takemiya might have misplaced his stone. That said, there are in total 13 possible continuations that White has tried, though the "proper" wedge was played in 683 games, so that's the one to stick with. 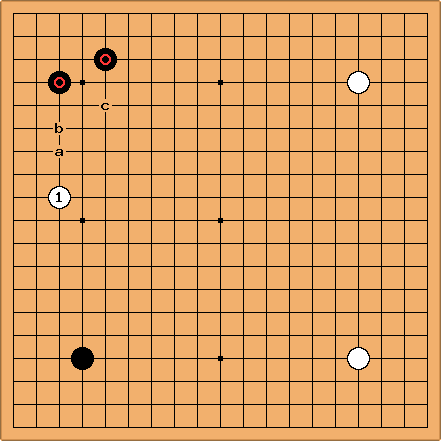 Andy: Can someone run a GoGoD search on this version of the improper wedge (or link to page on Sensei's if it already exists). I see this a lot by white at the kyu level trying to cheat black into an overly cramped formation at a, and not worrying too much about giving black too much on the other side.

Bill: Aside from discouraging Black from extending from his enclosure, this rather proper wedge threatens an extension to b, which then threatens to continue at c. :) See Eccentric Wedges.