Looking at the problem diagram for BQM20 it seems that something unusual happened in the upper right corner. From the explanation of the problem we know that it arose from a Black play at San-san (the 3-3 point) under a MokuHazushi (5-3 point) play by White. 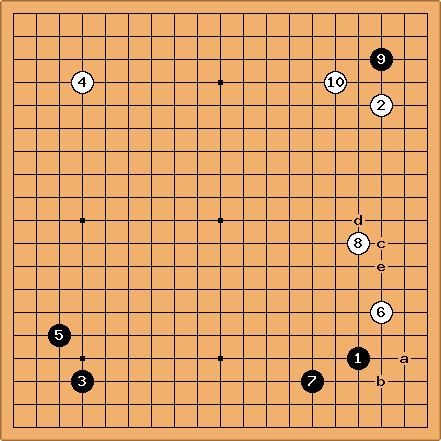 White 8 is already an interesting play. Often we see White responding to Black 7 with a play at a followed by Black b and White c. In this case the mokuhazushi at 2 is already low so the overall position on the right side for White will be too low.

Also if White succeeds in building an outward-facing position in the upper right corner, Black has the shoulder-hit at d to erase the position. When White does not play a, playing d instead of 8 is common. The play at d, however, leaves behind an easy invasion point for Black at e. This limits the value of any moyo that White builds on the right. Instead White picks 8, striving to get the most out of the right side. This 6-8 combo is often seen these days in the Kobayashi fuseki for similar reasons. --DaveSigaty

I'm the guy who originally posted this, thought you might want to know the sequence in thinking of these first few moves.

I was expecting a pincer, but Black obligingly played on the other side. To me, it seems like his stones are overconcentrated on the bottom, especially given the natural direction of development from the shimari in the lower left.

I pulled back with the large knights move because I did not think it necessary to play quite so loosely as the usual extension to the side star point, given the nearness of the mokuhazushi stone.

Black invaded at 3-3, and I couldn't be more happy with pressing him down and building up influence down the right side. --BlueWyvern

Black 9 is doubtful. Because of White's influence on the top and right, the high kakari at 10 is better. 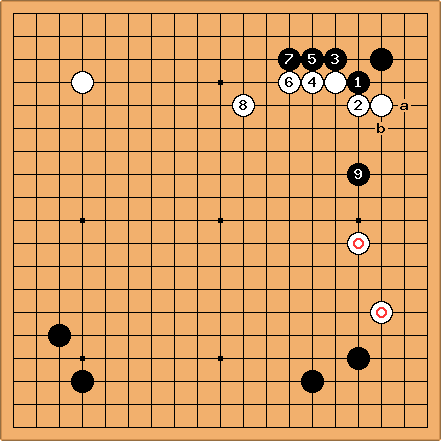 The sequence up to 8 is just me building a wall, which I thought was in great position because of the marked white stones. I didn't expect him to try something like 9 so soon, and I wasn't really sure how to deal with it. --BlueWyvern

Dave: Thank you! :-) White chooses to press Black with White 10. Black replies with 11 and 13 which Ishida Volume 2 calls "possible but a little vulgar".

Why call it vulgar? Notice that without the 11-12 exchange there would be a lot more aji in an attachment at a or b in the diagram. This would be very helpful for settling the invading stone in BQM20. Black makes his task difficult.

BillSpight: "A little vulgar?" In this case, given White's position on the right side, Black 11 is perhaps best described by language that would offend the delicate ears of our readers.

A turning point comes at White 14. This is more often played at 15.

Bill: White 6 may be better at b, to work with White's hoshi stone.

Dave: You may be right but White is trading off the better relation with the upper left for the increased weakness of the cutting point at c. 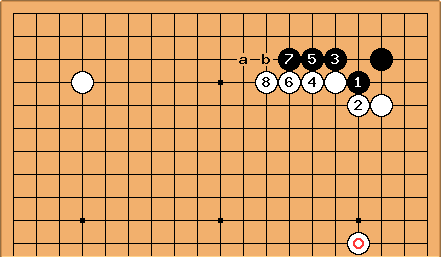 White, however, is intent on building up the right side as smoothly as possible. Black pushes at 15 and 17 to which White answers 16 and 18.

Meanwhile, Black has taken solid territory in the lower left and now in the upper right. Although the lower right is still open we can expect Black to enclose the corner or the bottom side.

White needed to continue to extend out to the left of 16 - as long as Black pushes from behind, White is happy to be pushed. Each step naturally builds the wall and brings the white hoshi in the upper left into the game. That relationship is a magic one for White. It has a huge impact on the potential size of any territory that White will build in the future. Now the upper side is open at Black 17 and the black shimari in the lower left is low - the white hoshi will have difficulty developing naturally.

I think at this point White has already fallen behind. When Black invades it is difficult to plan an attack that builds enough potential for territory without actually capturing Black (which is proverbially hard to do). At the same time I think that Black 19 is an unnecessary overplay. Black bets an already favorable game on a deep invasion. Probably he doesn't feel ahead and is intimidated by White's moyo.

I know that this happens to me a lot in games - I think that I am doing well but fail to understand the exchange that takes place. I lose track of the whole board situation. Am I really ahead or already behind without knowing it? Is the situation as desperate as I think or have I failed to appreciate the value of my own position and the limitations of my opponent's?

BillSpight: Thanks, Dave, for bringing up the question of previous play. :-)

I think that if White plays the nobi at White 18 (above), she will have the advantage. The keima leaves defects behind. 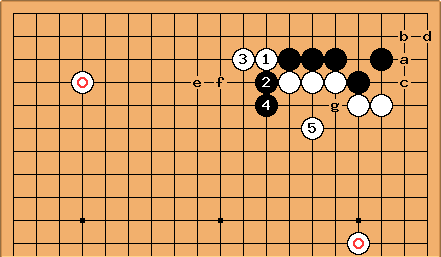 I think that the hane at White 1 is also playable. A fight develops, but the marked White stones are working. White a - Black d is White's sente against the corner.

Dave: I think White 1 is too optimistic here. In this type of cutting situation White needs to be able to play 5 at e but here White 6 at 5 (is g immediately possible?) would be just right. In the diagram when Black follows up by attacking the two white stones with f or e, I think White is disappointed.

Bill: Too optimistic? Just call me Mr. Sunshine. ;-)
How does the fight go?

Not bad for White, I think.

Dave: What's this "how does the fight go" stuff. You don't think we read these things out do you? :-) Black just plasters himself on White and waits to see what White will do.

Mr. Sunshine: Who reads stuff out? ;-)
I don't like White 4 (above, marked here). It seems vulgar to me. White can capture Black's two stones, but Black's wall is too good.

How about this?
Thanks to the cross-cut stone, White can play White 7.

A bit better for White, eh? But this does seem better for Black than my first suggestion. <sigh>

So I guess White should throw her stones away with sente. 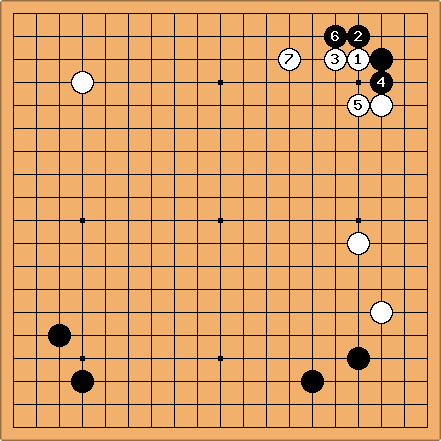 Bill: Earlier, I like White 1 - White 7, which confines Black to the corner. Locally, it is considered slightly favorable for Black, but White's outer influence works well with her other stones.

I've got a question. In looking through these comments on the situation, I notice a lot of references to specific joseki. I was wondering if anyone had any pointers on How Do You Learn Joseki --BlueWyvern