The concept of High and Low moves is fundamental to Go Strategy. With high we usually refer to the fourth line, while low refers to the third line.

According to traditionally accepted views, the corners and sides of the board earn the most territory. The center is generally thought to earn the least.

See corners, then sides, then center

The Third Line is the line of territory 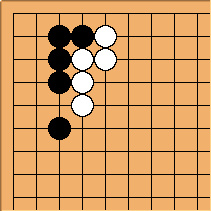 On a 19 by 19 board, it is thought the third line is easiest to earn territory on. It builds a fair amount of it and cannot be invaded anymore.

In this diagram, Black has about 12 points of territory along the left side. 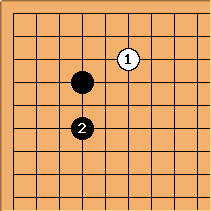 here, he's has not built complete territory yet. His formation is still open to invasions.

The Fourth Line is the line of influence 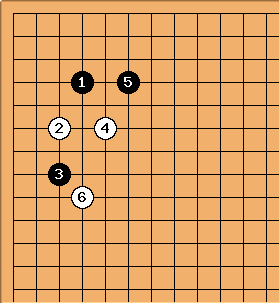 When we play along the fourth line, it mostly has a different purpose than making territory. In this common joseki for example, White plays

on the fourth line.

is not a move which creates territory.

faces the center and not the side.

faces the side, so we expect

to earn the territory along the side. 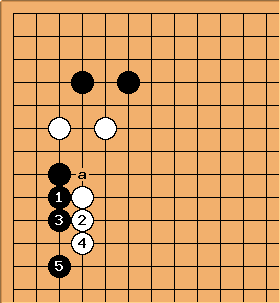 Black "walks" along the third line, as Kageyama would say, with White "walking" along the fourth. Black earns the side territory, and white gets influence in the center. (the standard push at a by Black has been omitted for simplicity).

Such central influence can be used to build a moyo, to be combined into overall thickness, to attack or to invade elsewhere and use these stones as support. 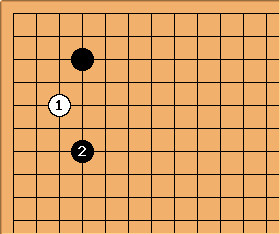 is a low approach.

is a high pincer. The issue of pincers is discussed at High vs Low Pincer.