The farmer's hat is a Korean go term adapted into English. It is a shape named by analogy to the cone-shaped straw hat worn by medieval Japanese warriors and later farmers. 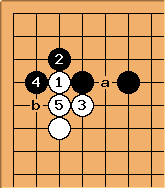 is called jingasa in Japanese, which corresponds to the Korean term (See

here). However, jingasa is also defined as having two empty triangles (see

here, and The Go Player's Almanac), which this shape does not (

are a "full" triangle), so there is some uncertainty about whether this example is correct usage.

The farmer's hat as a bad shape

The farmer's hat and in particular its empty triangle(s) is a heuristic to decide for or against variations that end up in such a shape, indicating the move or a prior move is a mistake: 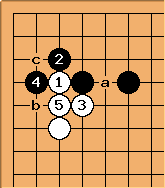 Prior to the AI revolution

was classified as a mistake, and White was thought to either atari at a or make a ko at b.

Since the AI revolution,

is considered the best move locally. The real mistake is rather

which under most circumstances is played at c.

The farmer's hat as a killable eye shape

The farmer's hat may also refer to the four-space, T-shaped killable eye shape.

Please refer to pyramid four for this interpretation.