Charles This is not such a novel idea, maybe; but one of those things that is worth getting out in the open (reifying) at some juncture.

I want simply to propose looking at diagrams like (for example, in relation with the farmer's hat)

where the numbers label the number of plays made internally to capture at particular points.

So this says this much: 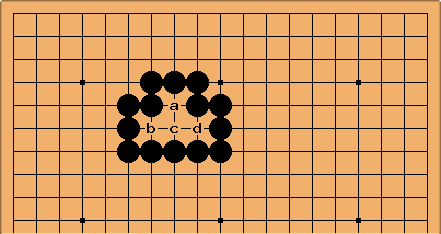 That much reconstructs from the map. Attrition means that each pass puts Black in atari assuming all outside liberties filled. Black then captures.

We know that for success with the method the first of the plays in Pass 1 and Pass 2 must be nakade: namely c in the diagam. This isn't true for Pass 3: at this point the snapback stage is reached, and White could equally play at d. That gives another valid map:

We also have no reason to make Pass 1 involve b and d rather than (say) a or b. That gives

Altogether there are a dozen maps in all that are valid.

For a total of 6. The proverb here (Four is Five and Five is Eight and Six is Twelve) counts 5 approach moves, because the assumption is that we begin with a white stone at c (or else Black at c lives, naturally).