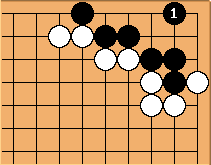 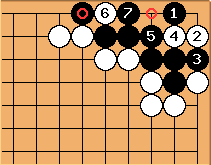 There is no way White can attack Black. The distance between

is wide enough for him to make a second eye (the circled point). 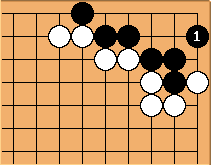 Bill Spight: It loses almost 3 points by comparison to the correct play. White has the following sente sequences. 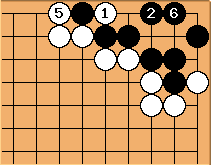 is a two-point sente play. 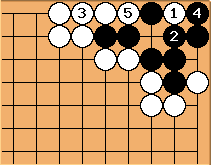 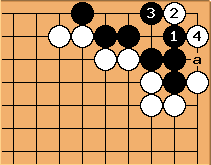 If Black carelessly plays at the 2-2 point, White takes the vital point with

and sets up an approach ko. Black can't block at a because of shortage of liberties. So he has to fight the ko at

. After White recaptures the ko ... 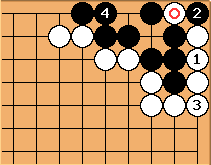 , putting the four black stones in atari. Black takes the ko with

, and Black makes an eye with

So, White has to play an extra move, and if Black loses the corner, he will have played twice elsewhere in return.

Anyway, living unconditionally is much better for Black. 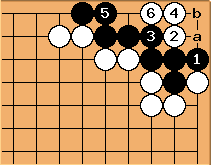 Enlarging the eyespace with

, Black has to defend his cutting point with

. Further enlarging the eyespace with

and now White can either play atari at a in the future, or if Black plays there, almost fill Black with a farmer's hat by playing at b.

Anonymous: Isn't Black at a death in gote? W has made it impossible to DivideTheSpace already.

unkx80: Yes. But "almost fill" does not mean that you must play there immediately. 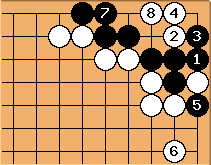 doesn't help much. After

on the 2-1 point, White can answer

, preventing any escape. Black has only one eye. Now 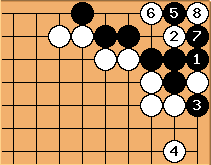 Black does better to try to run with 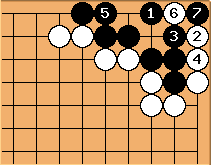 leads to a throw-in ko.