Corridors are go positions that are effectively one-dimensional. They yield numbers and infinitesimals in chilled go, in which they are analyzed in terms of combinatorial game theory (CGT).

In the endgame, there are cases where one should (surprisingly) attack shorter corridors before longer ones, as illustrated in Mathematical Go Endgames, § 1.2 (p. 3).

Corridors can be open or closed. They can be empty or can contain "gold" at the end (terminology from Endgame 2 - Values). A gold corridor is "rich" if the gold is worth more than two points; otherwise Jasiek calls it a "star corridor".

N.B. This corridor is also double up star.

Counts and values of empty corridors

For closed corridors, a move by either player is gote, sente, or ambiguous, so we can work out the counts and move values by straightforward miai counting. For open corridors, there are some complications. If you want to skip the working out and just see the answers, go to the summary.

If black plays a here, there's two points of territory. If white plays a, there's an unsettled position, so we have to think about the follow-up moves. But luckily we've already done that: we know from example 1 that it's a half-point position. So the count is the average of 2 points and ½ point: that's 1¼ points. And a black move changes the count to 2, meaning that the value of a black move is ¾ point. As you'd expect, a white move has the same value.

By now you might be starting to see a pattern. Black a: three points. White a: see previous example. Count = 2⅛; move value = ⅞.

If you like writing down equations, you can prove this using a

This gets interesting. You might think you can apply the same method with an extra step. If white pushes into an open corridor, you get a shorter open corridor. If black plays first, it turns into a closed corridor. Both moves look like gote, so you should be able to average the results, right? Let's take a look.

If white plays a, what's left is a bamboo joint with no territory. If black plays a, we've created the position of example 1 above, so it's half a point. And both options may appear to be gote. On average, then, you might think black has a ¼ point of territory. We can check this with the method of multiples: four of these corridors should add up to a full point. 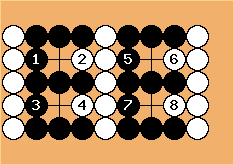 Oops, black didn't get any territory! It looks like an open corridor of length 3 is actually worth zero points. Except for ko threats, it is equivalent to a dame.

Try again with a longer corridor:

Black a gives us a closed corridor that we know is 1¼ points. White a gives us an open corridor of length 3. We now know that the shorter corridor is worth zero points, so if Black a is gote, then this one should be worth half of 1¼, or ⅝ of a point.

So two of these should be worth 1¼. By the principle that the first player can "round to an integer" we should get 2 points if black goes first, or 1 point if white goes first.

No, there's only one point for black here. You can try a few different move orders, same result. Or try four or eight multiples, it won't help. This corridor is exactly half a point. What's gone wrong here is that we've been treating all the moves as gote, and trying to average the follow-up positions. Perhaps

in these corridors is actually sente, which is how we have played them so far.

The result is the same, one point for Black. The problem is that the reverse sente,

, should gain something by comparison with when Black plays first with sente, as in the previous diagram. But it doesn't. So what is going on here? The next diagram supplies the answer.

is gote, gaining on average ½ point.

temporarily raises the local temperature to ¾, so

continues. We say that

reverses. We consider the sequence through

What this means is that these two corridors are (except in terms of ko threats) equivalent.

And that is so no matter what is the length of the closed corridor.

Counts and values for small corridors: 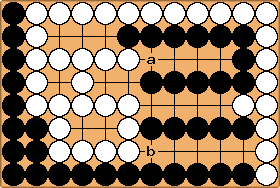 (Sebastian:) Besides their use for theoretical considerations, can there anything interesting be said about them for practical play, other than that the bamboo joint is an open corridor?

Bill: The whole point of chilling is practical play. :-) It enables already known results in CGT to be applied to go.