Here are some examples of infinitesimals in chilled go that occur in corridors. 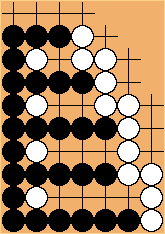 These corridors correspond to the following infinitesimals.

Since the play in infinitesimals is about getting the last play (tedomari), you can see how Black would not be in a hurry to play in any of the longer corridors, as he still gets the chance to play last even if White plays there first.

There is a similarity between a fight for the last play and a race to capture. Each infinitesimal is roughly equivalent to some number of ↑s, called its atomic weight. Atomic weight is analogous to the liberty count in a semeai, but the contest is over tedomari. An advantage of at least 2 in atomic weight is enough to guarantee tedomari.

White to play should play in one of the longer corridors, to reduce Black's atomic weight. Which one should he play in?

It turns out that it does not matter. A play by White in one of the long corridors gains the same thing. In terms of infinitesimals, it gains ↑*, reducing Black's atomic weight by 1.[1]

Why does the third corridor correspond to ↑↑*?

For convenience, I am just going to call these positions by the names of their corresponding infinitesimals. By definition,

Of course, the counts are different. What we want to know is if they are equivalent in terms of getting the last one point play.

To say that this position equals 0, in terms of go infinitesimals, means that it is miai. With correct play, it does not matter who plays first, the second player will get the last play and the result will be the same (not necessarily 0).

is correct play for both sides. The result is obviously miai, with a score of -2.[2]

We get to the same place by a different route. So the whole thing is miai, as claimed.

You may verify that this is optimal play by both sides.

Now, if this came up in a real game, you could read it out. But if you know your go infinitesimals, you can quickly see that it is miai.

Let's take the top one first.

If a game is not a number, we may add a number to it by adding that number to both its Left and Right followers, so

The top game chills to `` 1 + * `` (STAR). What the number is does not affect correct play at temperature 1, where we are simply trying to get tedomari, so it is customary to ignore the number and just call this position *.

Now for the second one.

So the middle game chills to 2 plus ↑ (UP). Again, we ignore the number and just call this position ↑.

Now for the third one.

The fourth one chills to 4↑↑↑, which may be derived in similar fashion.

The chilled value of the whole position is just the sum of its parts:

This means that when White plays in one of the long corridors she gains ↑``ast`` in the chilled game, which is about as well as one can do by playing a go infinitesimal in the fight for tedomari. (Saving the stone gains ``ast``, which may be no gain at all!)

White scores are, by convention, negative.

Thus Blacks options can indeed be simplified to ``0``.