Yet more infinitesimals in chilled go!

(Note on the diagrams: The stones framing the positions are considered alive by convention.)

This infinitesimal is common. And it is one we already know. Which one is it?

If White fills, the result is 0, of course. If Black takes we get this.

If Black a then White b, and if White b then Black a. Miai it is.

Somewhat less common is this position, which is also a familiar infinitesimal in disguise.

If Black plays first, we have a *:

While White can play to miny-2.

So what is our friend?

reverses to "zero" (ignoring the count, as usual). This sequence is obvious to most go players who have not thought about infinitesimals. Well, just because White 1 leaves the local temperature the same does not keep it from reversing.

It's obvious, but looks can be deceiving. If

If Black a, then White b; and if White b, then Black a. If White starts at a,

So, indeed, our friend is v in disguise. 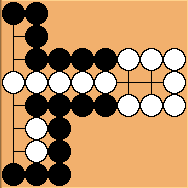 This monster looks formidable, but it is also a kind of familiar infinitesimal in disguise. :-) 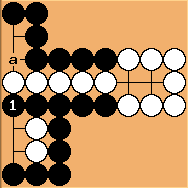 moves to a Black sente position, a miny-8. 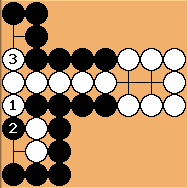 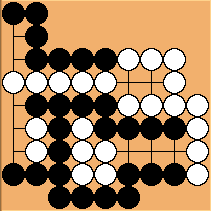 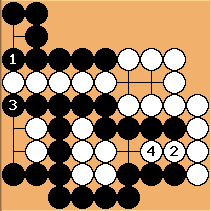 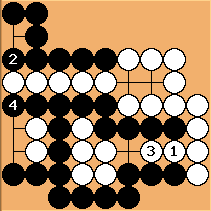 And if White goes first,

So the monster is a 0-miny. That's surprising. It doesn't look at all like this position:

The key is the eventual sente play for Black. Each black play filling one of White's liberties is like a move in the corridor.

This kind of position can be very deceptive. That White sente is so tempting. ;-) 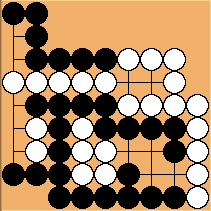 Where should White play? (Of course, you have gotten a big hint. ;-)) 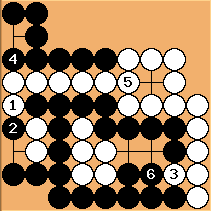 How many people would jump at the sente?
But Black gets tedomari. 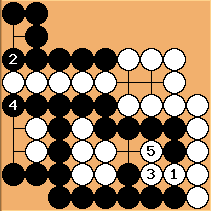 White should approach the tiny. 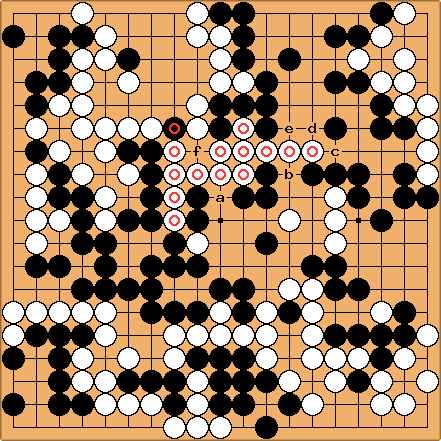 This position comes from our Ongoing Game. The large White group has six liberties (a - f). Filling the fifth one is Black's sente, so this infinitesimal is a 0(4)miny. With such a large atomic weight, White should have no trouble getting the tedomari at temperature 1. However, Black got the last one-point move, because White took his sente.
It did not affect the final score, but it doesn't hurt to get that tedomari. :-)