Here are some infinitesimals in chilled go where at least one player has more than one live option. In the other cases we have seen, one option dominated or options were equivalent.

moves to 0 (with the usual adjustments in chilling).

The miai is not so obvious. Let's look at some lines of play.

offers White the hardest choice. But

, then Black still gets tedomari.

This beast crops up occasionally. In fact, one like it is in the top left corner of the Ongoing Game. It is an ambiguous position.

But Black also has a sente option, with

. Black threatens the sagari at a, saving his stone.

Of course, the extra option for Black gives him an advantage. Somewhat surprisingly, this game has an atomic weight of 1, just like ``uarr``. In fact, White will prefer to play in this game to playing in ``uarr``.

In other words, White should play at a rather than b.

To check that, let's play the difference game. On the left, White plays at a; in the negative game on the right, Black plays at b. 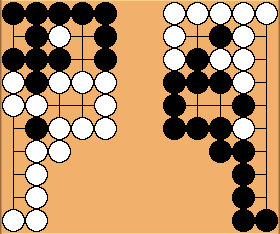 If White's play at a is correct, White should get tedomari regardless of who plays first. 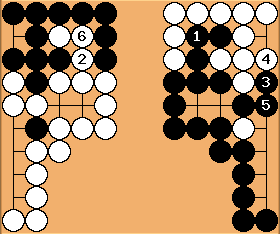 plays to a negative position, which is a White win. 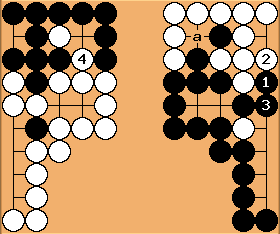 is at least as good as Black a. But White still gets tedomari. 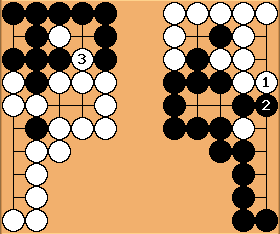 and then gets tedomari with

So White should prefer to play in the beast over playing in ``uarr``, or in a longer such corridor.

That illustrates the power of the extra option. White would prefer to play in ``uarr`` over a play in either `` ast `` (gote) or a miny (reverse sente).

This infinitesimal was only recently found in chilled go. Each player has the choice of a or b. A move to a produces a 0, a move to b produces a *. The game looks like this:

At first, the idea of a play at b seems absurd. Why make a play that allows your opponent to return to even, when you can just gain a point?

It happens that ``ast"2"`` is well known. It is the infinitesimal for a Nim heap of ``2``. If you have played Nim, you know that you can take either one or two tokens from such a heap.

Here is a Nim position in go:

wins (gets tedomari) by the equivalent of taking one token from the heap with two tokens. The rest is miai.
White wins in the same way. :-)

gets tedomari. Now a and b are miai.

I ran into this beast in a pro game.

White plays the hane-tsugi, leaving a favorable corridor on the right.