What infinitesimals correspond to these corridors? 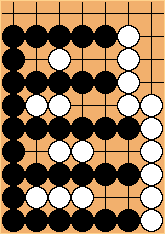 The opposite of a TINY is a MINY.

Tinies are White's sente, of course. For getting the last play, they favor Black, since Black plays last regardless of who plays first. By convention, we say that they are positive. (Positions favoring White are negative.)

In general, in a fight for the last play, White should play the tinies first, starting with the one with the largest threat.

Tinies are called tinies because they are positive, but less than ↑ (UP).

Comparing a tiny with ↑

To make the value infinitesimal, let's make the mean value 0 by saying that Black has captured 1 White stone. We are mainly interested in the tedomari at temperature 1.

Black wins. The board score is the same, but Black has the captured stone.

However, Black has made one more play than White, which costs one point in the chilled game, so the score is 0. Black wins because he gets tedomari.

Black wins. The score is even, but Black got tedomari.

Since Black wins no matter who goes first, the difference is greater than 0, and ↑ is larger.

Atomic Weight of Tinies and Minies

Black gets tedomari and wins the chilled game.

White gets tedomari and wins the chilled game.

[1] Derivation of the chilled values:

The top corridor has the following game tree:

(An unchilled * is a dame.) It chills to

The bottom (PJT: ¿second?) one has the game tree:

As usual, we ignore the integer and just call these TINY-1 and TINY-2.

[3] This is not a proof. There are other games that are confused with ↑ that do not have an atomic weight of ``1``. Atomic weights are not necessarily numbers. –BillSpight