In combinatorial game theory, a double up star, notated as ``"↑↑"ast``, is a game that is worth the sum of a star and two ups. In go, that sum can arise as the combination of these or equivalent positions, plus or minus some integer score.

It is true, but not obvious, that the following position is a double up star.

We can show this by subtracting this position from the other three and showing that the result will be the same no matter who plays first.

To subtract this position from the others we simply change the colors of the stones and add it to them. The negative of double up star is double down star. 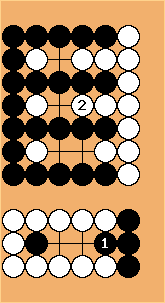 Black's best play, as the reader may verify[1], is to enter the White corridor with

makes the rest miai, for a combined score of 2 points for Black. 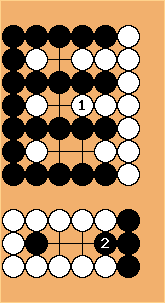 White's best play, as the reader may verify[1], is to enter one of the UP corridors. After

makes miai for 2 points for Black.

The result is the same, no matter who plays first. QED.