Preventing the formation of the Chinese opening

This SL page is based on Charles Matthews' article at GoBase. - Floris Barthel? 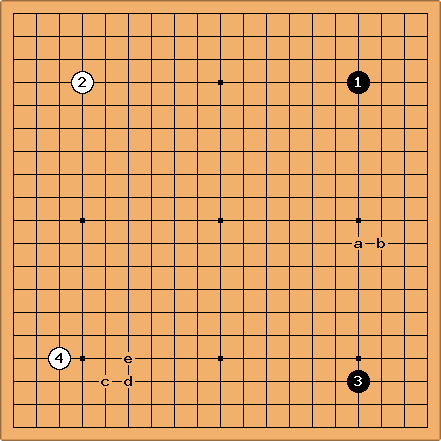 is designed to limit Black's future expansion on the bottom side.

If Black completes the Chinese fuseki now with a or b, White will play at one of the marked c or d.

Therefore, it is customary for Black not to complete the Chinese formation, but instead to continue as in the following diagram:

(Imagist: If white completes her shimari at c, what about black e? Doesn't that give black the development potential he wants, especially with the high Chinese? I would think that d would be the only way to complete the shimari for white. 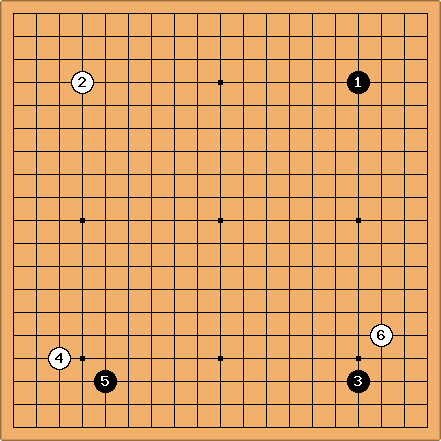 prevents Black from ever getting the chance to finish the Chinese formation.

Charles I didn't have a computer database when I first wrote about this, two years ago (see

http://www.gobase.org/studying/articles/matthews/fuseki/14/). In a sense that's better, from the point of view of discovering things: more sense of achievement.

What I now see is that the most recent case of Black completing the Chinese-style formation in a pro game was 1992[1]. The approach (low or high) in the lower left is completely dominant.

I have edited something out from the first diagram, that I didn't understand. 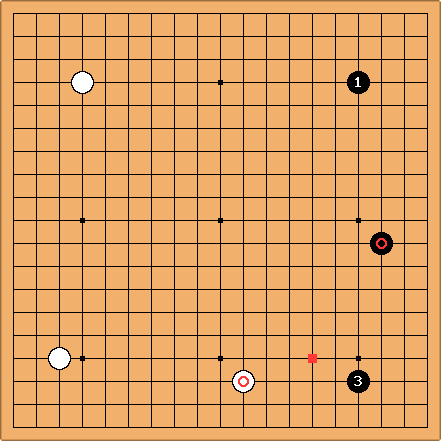 I think this was being said: assuming

is a good point because White at the square-marked point is ideal. 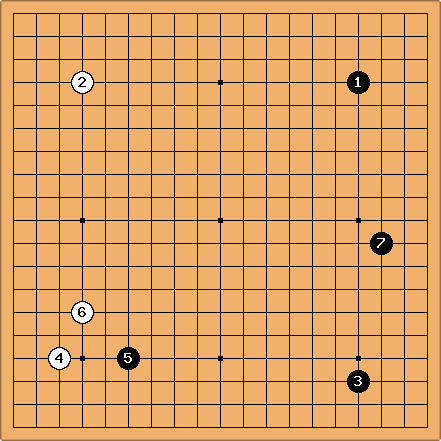 [1] nachtrabe: Yoo Changhyuk has been playing with it recently. Examples: the 5th Korean Maxim Cup, final 2; Yoo Changhyuk vs. Rui Naiwei, W+0.5 (2004); the 1st China-Korean Team Competition, round 2, Yoo Changhyuk vs. Wang Lei Sr., B+R (2005) also completes one. The latter is interesting because white plays at C4 and then black plays a two-space approach at F4 before completing the Chinese Opening at R9 (see diagram).