DaveSigaty: I just encountered the following variation in a game on IGS. I was White. 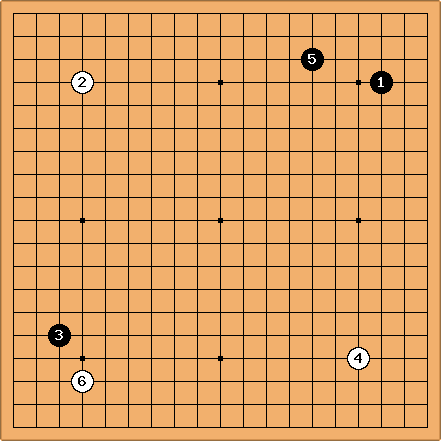 As mentioned on automatic invasion at the 3-4 point I like to challenge the 5-3 or 5-4 plays early; so I did not hesitate to play

. Besides, in this position with White having played first in both adjacent corners, I do not think that Black can make a strong positive use of the 3-5 point stone at

. Either he is likely to use it to extend up the left side, countering the influence of White's hoshi stone in the upper left, or he is going to try something tricky; for example a favorite line in the taisha joseki ;-) 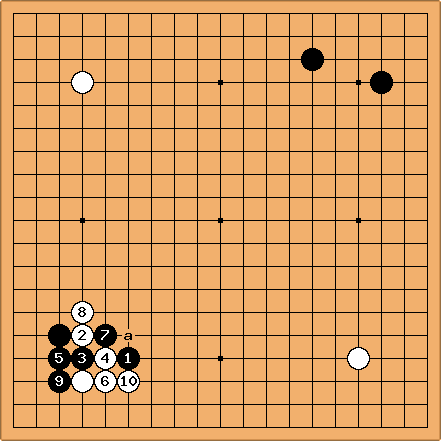 Ah-hah! It looks like I was right. We start to head for the main line. White can not play

since the black enclosure in the upper right breaks the ladder.

That is OK though, since as discussed in BQM13 the strategic idea of the main line works best if Black has support in the upper left - which is not the case here.

W* at a would be an unworthy compromise on White's part since I had decided I should have nothing to fear. So does Black not actually understand the strategic ideas or does he have something special to pull? 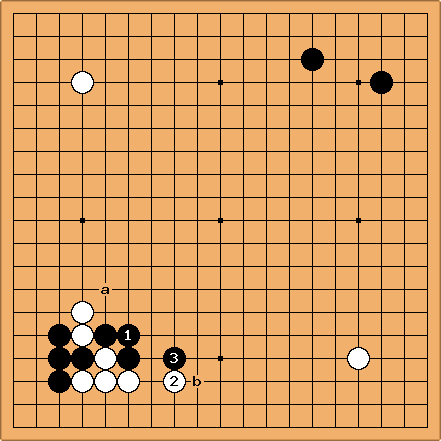 followed immediately. Hmmm, a prepared line? I know two things about this

is a common idea when Black starts with a direct play such as a against the two upper white stones.

So if I answer passively at b, for example, I have to expect Black to choose an aggressive continuation against the upper stones. I have no idea which approach he will choose and the passive answer would seem to make

a perfect kikashi. (By the way - after the game I checked Ishida and indeed

here is not shown. None of my Japanese dictionaries have it either.)

I actually played as shown below. But what should White play here? 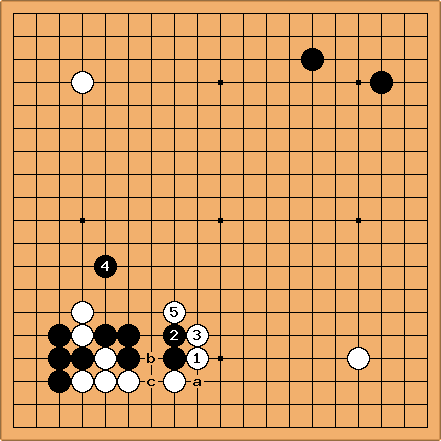 , thinking that Black has some potential problems with shortage of liberties in this situation. In particular, I thought that if Black cut at a with

, White could play at

here, and answer Black b with White c. After that I do not think that Black has time to rescue the stone at a.

instead of cutting and White replied with

, keeping the heat on Black's liberties (if now Black a, White c seems to put Black on the spot). Black blinked first by playing

What could Black have done better?

Although the game went well for White, could White have done even better?

dnerra: Difficult sequence. My first thought is that

in the last diagram is bad - it does not offer sufficient help to the black stones below. I have added an alternative below.

DieterVerhofstadt: My first reaction is that, although Black threatens to capture the two stones on a large scale,

(diagram below) or even better, a. White is then very strong, has influence towards the bottom right and makes territory. Black however has still a lot of aji to resolve along the left side.

Now it is White suffering from aji. What if Black next cuts at 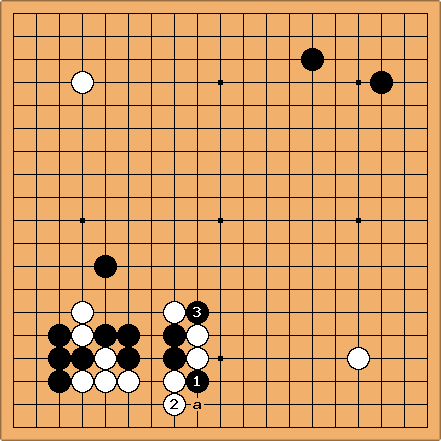 DaveSigaty: I expected to answer

here which Black must answer, or lose the two stones. In fact it is difficult to find a reasonable reply for Black so I think the cut really isn't possible without some preparation.

HolIgor: It is a variation on the crane's nest.

DaveSigaty: So Black can not cut at

in Dieter's diagram (b in mine). Rather he has to back-track and protect his stones somehow. In that case is White better off having a stone at

in Dieter's (which leaves less aji in the black cutting stone but puts less pressure on the black stones above)? I don't really know which is better; I didn't consider descending at

in Dieter's diagram during the game.

dnerra: Here is my suggested improvement for Black: 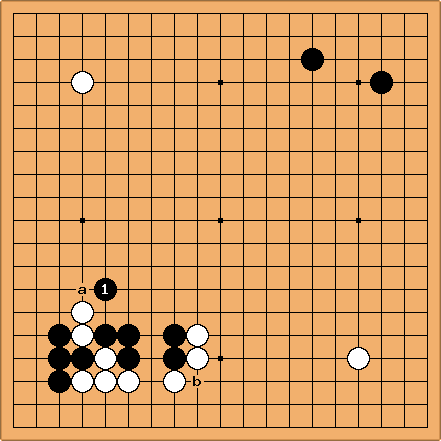 Black hopes either to take a firm grip on two white stones with a,or to get a successful cut at b. I don't know how White should reply. If White hanes as in the game...

...Black gets two stones and sente. However, White gets nice influence as well, and the two stones still have aji, so I don't think White has any complaints here.