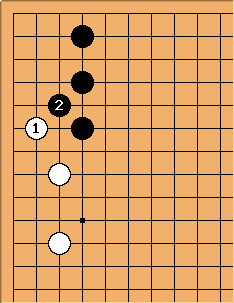 This is another common diagonal response, to a keima slide. 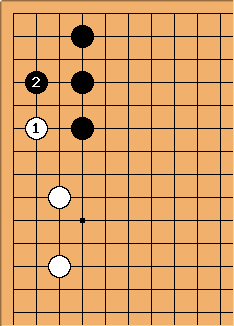 slides from one line further, the jump B is the usual response.

I learned this years ago. Frankly, I have forgotten why. Yesterday I saw Prof. Teigo Nakamura 6-dan. He has the most encyclopedic go knowledge of any amateur I know. He had forgotten why, too. ;-) But he spent a few minutes playing with the position and came up with the answer. 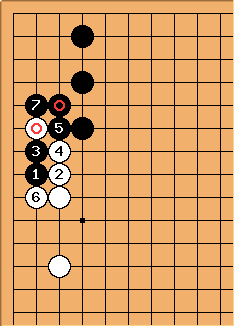 , later he could play 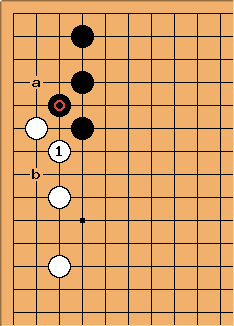 If White protects with

, Black has sente; but she threatens to jump in at a. Note that Black had responded at a instead of the kosumi (marked), he would still threaten to play at b, but White would not have a big threat after

(Moved from answer keima with kosumi.)

Charles Matthews I have wondered about this, having seen something very similar in an old Japanese book on tesuji.[1]

Firstly, there is no 'shape-based' rule. 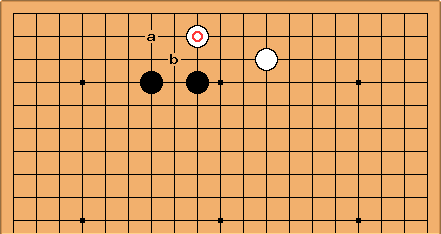 If one looks at this sort of pattern, just somewhere on the side, then Black a and Black b are both commonly seen.

If one specialises to the case of the small high enclosure, then the diagonal move answer is more popular:

here is much more popular than Black at a.

is more popular than Black a.

These come from database search: they may contradict the book I read.

Looking, as one should, into the game context, the diagonal move answers do seem to be in the type of position where Black wants to take sente.

, at which point Black would want to add another stone here.

In the keima slide case, White's immediate cut with

is possibly tactically. (White would like a good ladder for this, but perhaps that isn't a precondition?) 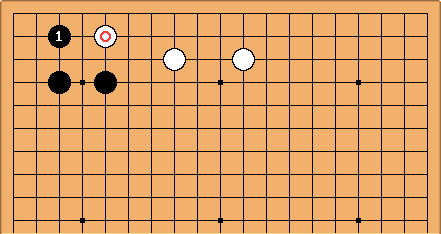 is given as correct by Kano. In three pro games, Black instead played tenuki from the corner. 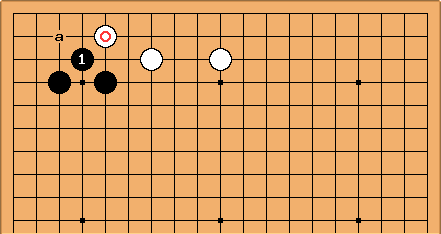 here is given as correct. This is more plausible: a low-ranked Korean pro has played a, but as a rule this is what one sees.