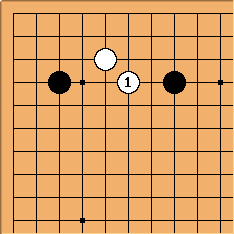 This variation (of the 3-4 point low approach two-space high pincer) is chosen by White to settle quickly, in almost all cases. This is consistent with White's initial low approach here. 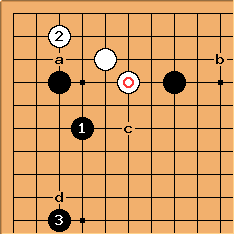 here, preparing to extend to

for good position. The modern play here is

(rather than a, which is only occasionally seen now), Kitani's idea; and White ends in sente since her group can now take care of itself.

at b is a play liked by Otake Hideo - White attacks the pincer stone first, and may not need to play into the corner for eyes. At c is a big follow-up point round here for either player. Sometimes

is played at d to lessen the effect of White at c. 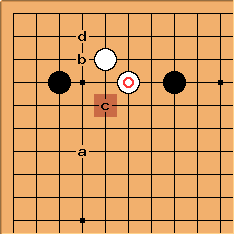 Black may also play at any of a to d. Black tenuki immediately is unlikely here. Black at a before playing tenuki is a light way to play. Black at b denies White the corner, but White can easily build up a strong position with d etc. after it. Black at ''c'' is the forceful kado joseki fashionable in the 1960s, with some very complex variations. The footsweep at d has become established as a more modern way to prevent White settling easily.

DaveSigaty: In the GoGoD collection the diagonal reply is the most frequently used reply to the two-space high pincer. It and the two-space jump appear a little less than 1/3 of the time each. Their use is distinctly different however:

Despite this broad characterization there are various examples in the collection of pros using each of these moves in the opposite way from what is mentioned, i.e. playing the diagonal move when White holds the upper right or playing the two-space jump when the corner is Black.

Bill: The kosumi was very popular when I was learning go. I never understood it. Later, pros started playing the two-space jump. The feeling was that the kosumi was slow. Maeda said that he never liked the kosumi. 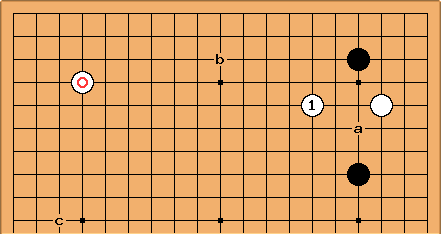 There's another question about this that I've been mulling over for more than 20 years (since a game against Lim Yoo-jong in Paris). In this position if White plays at a and we go through the standard joseki, Black's final stone at b is well placed to limit the influence of White's marked stone. In fact one can see b and c as like miai for White's development here. Therefore it is interesting to find out that in this case

This surely means that this joseki choice question depends on multiple factors of context (as well as taste), quotidian though it may appear. 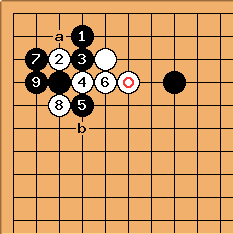 is the reason that the kosumi is effectively not played anymore in professional games. The idea dates back to Kajiwara Takeo 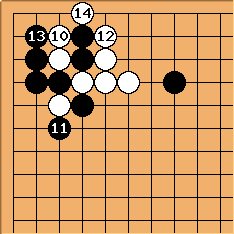 White settles easily but in gote. 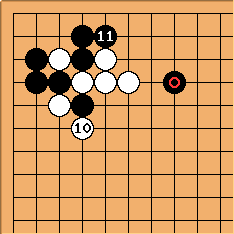 is a burden for White, because she can't prevent the connection to

in an effective way. If White does so,

will have at least a useful forcing move threatening to connect, so 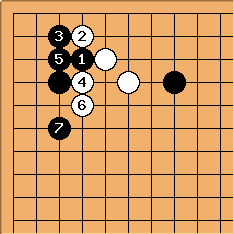 Here, White makes shape while giving the corner to Black. The Black corner is much bigger, but Black ends in gote here.