aLegendWai: Sorry. I don't understand. See my following questions. (I think I should be in line with your inverted diagrams) 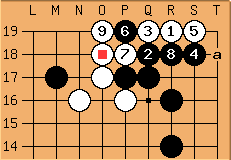 First B doesn't need to respond at a. a is not sente to W due to the empty point at

is in Gote. However W has an option to stop and plays elsewhere after 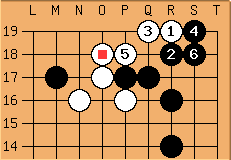 Mef: Perhaps black should try this sequence, forget sacrificing a stone and accept ending in gote. 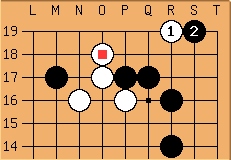 is a wrong move. 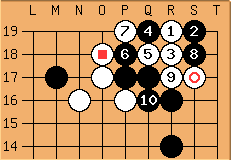 at the circled point.
The problem is if white plays the atari instead of

isn't an option. I moved your "normal monkey jump response" diagram to [1] because it seems to be more appropriate. I renamed your diagram as "Monkey Jump 01b" in order to fit the flow of other diagrams.
Tell me if you mind. I will change them back. 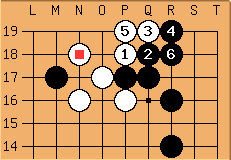 This is the suggested sequence by DJ.

Now we compare the difference between Monkey jump 01a and Hane-Hane diagram. So if we count the affected area of (rectangle T19 * O18) in terms of deiri value (d):

So monkey jump is 2 d-points better than hane-hane.

Relating to sente-gote relationship, it is worth noting that both variations of

can choose the hane-hane variation. So the simple extend one doesn't seem wrong to me.

Any idea is welcome.

DJ: Dear Legend, I couldn't really understand your diagrams, but I see that meanwhile I was earning my living Mef has put some order in...
Now I will try to show better how I count, so that we can have a common base of discussion. In explaining the standard way to deal with Black's invasion (

below), I tried to compare the sagari (

in dia 1) with the established move ( 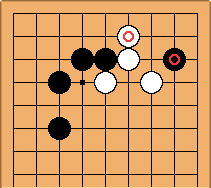 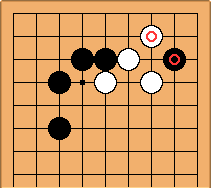 After dealing with the invasion starting from the "correct" move, the situation is as in the diagram bleow

And now the follow-ups: a classic sente hane tsugi from the "correct move" and a sente monkey jump from the "wrong move", with standard way of answering a monkey jump: 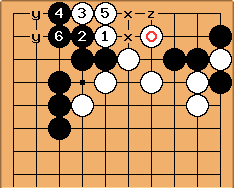 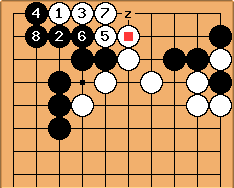 As you can see, both sequences are sente, in the first,"correct" one, Black has two points at y and White two at x and maybe one at z. In the monkey jump from the "wrong move" Black has nothing and White maybe one point at z, so point-wise the two diagrams are equivalent. The big, really important difference is that in the "correct" diagram White has an eye as it stands, and in the "wrong" one such eye is not that clear...

I hope to have answered your doubts.

This is, as a 2k, how I count (when I'm keen enough to do it...): I just compare two alternative sequences (black first, then white first, or one option vs. another option) and try to reckon the difference. I do not bother about half-points or (SQR (2))/2 points. I am too lazy to learn now more refined techniques (you cannnot teach an old dog new tricks...).
I do not even bother whether the way I count is called deiri or something else: I do not play in the game of finding the most rigorous definitions or names for moves on the goban. A hane is a hane is a hane. It's a move with a purpose. Why should I make a difference between hane and bend? I'm Italian, for the sake of mine! Shall I say "pietra che gira intorno ad un'altra nemica partendo da una amica e lasciando un punto di taglio"??!? If I use Japanese it is more likely that I will impress some pretty young girl at her first moves...
If you say deiri you have to define deiri, then you have to define "counting" and then, without noticing it, all of a sudden you'll find yourself an avid fan of Robert Jasiek, bless him! ;-)))

aLegendWai: Hi, DJ. Too busy in these days so I didn't read your explanation for long.

I would like to talk about your response to counting and definition.

As far as I know deiri counting should refer to the counting which compare the differences in points between 2 moves.

I am with you on all aspects.

I will bother to learn refined counting techniques in case if they really helps me in the battle of Go. As a 8k, I just can't see the value of some complicated ways of counting. And I just don't bother to learn and understand its theory (eg somewhat why sente is worth twice?).

I don't bother to argue about the definition of a word. Like previously someone said peep has to be really threatening (to cut) in order to qualify as a peep. Or what cut is really a cut?. What is not? After you understand these definitions, you start to know why some proverbs or theories are correct. But that's not enough. We have to take read between the lines in order to grasp the "real" meanings of them, not to say loads of background knowledge and stuff we have to acquire before understanding them. If you read proverbs literally, you will suffer. Proverbs appear for Go beginners, but it is not easy to grasp those kinds of stuff.

These sorts of definitions and argument seem to be rather pointless. What can you gain in playing better by knowing deep on how to define or distinguish or classify some moves, or try to understand why all simple and short proverbs are justified (by remember/understand their hidden meanings and loads of background information)? All sorts of academic things with low practical values!

I am being unreasonalbe and fierce again. If my comments anger anyone or Go experts, sorry in advance.

Alex Weldon: Well, your comments don't anger me, but I'd like to disagree somewhat. While it's true that knowing the difference between a 1.33 and a 1.40 point endgame move is unlikely to win you many games as a kyu player, it's not good to be too blase about theory. One reason that people get stuck at certain levels is that they disregarded theory when they were weaker, thinking, "I'll get strong by playing lots of games first, then I'll start worrying about these confusing dan concepts like direction of play, aji and miai counting." The problem with that, especially if you're playing against people your own level, is that you develop bad habits. For instance, you play "sente" endgame moves against them in the early middlegame and they always answer, because of the usual kyu player's obsession with hanging on to everything that looks like his territory. If you didn't read any theory, you'd be very likely to think that your play was good. Then, when you got to a high enough level that you started facing opponents that didn't answer you, you'd be likely to think "the fool, he's letting me destroy his territory!" and then not understand why you lost. Eventually, you'd come to understand that his tenukis were more valuable than what you were threatening, but it would take you many more games to come to that realisation than it would if you'd read about the relative nature of sente/gote earlier.

Put another way, disregarding theory is akin to basing your game on trick plays. You will learn by playing, and correct the mistakes that opponents at your level can punish... but the mistakes that your opponents respond to incorrectly will essentially become trick plays that he has fallen for. Since you get a good result, you will yourself be tricked by your own moves. This is advice I often give my students: play the moves you think are correct in theory, not the ones that, in your experience, win you more games. You may lose more games in the short term, but you will improve more in the long term.

P.S. I wish you wouldn't call the sagari above "Alex Weldon's proposal." I suggested it as one of three possible ways to prevent connection, without making any claims as to which was best, because I didn't know. Upon consideration and reading what's been written by others, it is clear that the kosumi "shape move" is much better than the sagari.