The following very full explanation was provided by John Fairbairn.

Sagari is a common Japanese go term also widely used in English. Some English speakers use the term more broadly than the Japanese do. In Japanese it is a verbal noun and the verb form sagaru is widely used.

Sagari is used to describe a single move. The meaning given in Hayashi's encyclopaedia "Igo Hyakka Jiten" is: "Sagaru refers to a position where a nobi is played towards the edge of the board and not towards the centre of the board." Diagram 1 shows an example.

in Diagram 2 is also a kind of sagari but in this case, he says, it is stressing the securing of the corner. 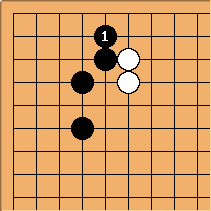 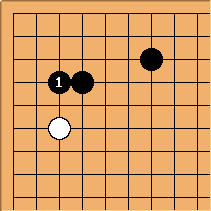 The Nihon Ki-in's "Yogo Shojiten" (Small Dictionary of Technical Terms) is quite succinct. It simply says "a sagari is a nobi move towards the edge of the board", though it should be noted that this dictionary often simply distills from Hayashi). It also gives two examples. One is similar to Diag. 1. The other is Diag. 3: 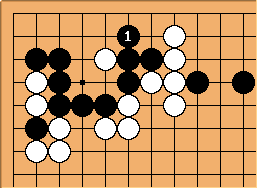 These definitions are easier for a Japanese because the verb sagaru is common in the ordinary language. It means fall, drop, sag, decline, etc. A Japanese person therefore has some idea of the meaning even without the help of a go glossary. English definitions often have to be put differently: for example "a descent from the third to the second line, or the second to the first line". Though this way of putting it is common, it evidently does not capture the example of Diag. 2. In translations,words such as descent or dropping down are often used, though not always consistently.

In practice, most references to sagari in Japanese commentaries refer to a move on the second line. It is, however, possible to use it of moves on the third line (as above) or on the first line. However, when used on the first line there is a strong tendency in Japanese to use an adverbialised form sagarikiri, which can be thought of as meaning something like "sagari to the limit". Furthermore, sagarikiri is very often replaced by orikiri. (Both these terms can ONLY be used of moves on the first line.) Far less often sagaru alone is replaced by its near synonym oriru. None of sagarikiri, orikiru or oriru is ever used in English; if a Japanese term is borrowed, sagari used to cover all cases.

Segoe and Go Seigen's Tesuji Jiten (Tesuji Dictionary) has a section on sagari tesujis. Most are second line moves but a couple of first-line examples are shown here. Note that these are described as sagari in this book, but that is probably because they are shown under the general heading of sagari. If they were shown independently it is my (JF's) opinion that they would more normally be called orikiri. 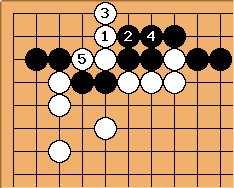 a sagari too? Double sagari? 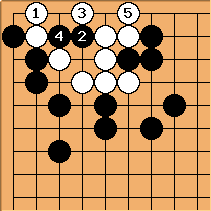 In the latter case only

is mentioned in the book as a sagari. Is

a sagari too? I would say yes, but of course it's not a tesuji so not worth mentioning specially.

Some examples of how sagari is used in Japanese sentences:

Note that, apart from -kiru, sagaru does not combine with the otherwise common suffixes such as -komu and -dasu.

1. There is a special usage of sagari in the phrase sagarisagari (or oriori). When estimating territories during a game, territories not yet fully enclosed near the edge are assumed to be enclosed by dropping stones straight down to the edge. Two examples from Hayashi: 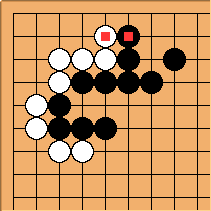 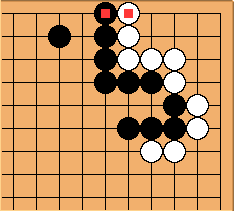 This usage does not seem to occur in English.

It's an interesting question whether the second sagari here really is one. If it was played in a real game, a word such as osae (block) might be preferred.

Bill: Is there as second sagari here? Which one is it? I think if a temporal sequence were contemplated, rather than a physical shape, we might be talking about sagari osae. In both cases, the actual play is likely to be hane-tsugi.

2. Sagari also occurs as part of the term burasagari (verb form burasagaru; oriru does not occur in this usage). Hayashi's definition is "A sagaru move on the third line from an isolated stone on the fourth line in a narabi shape." Tetchuu (iron pillar) is also a kind of burasagari."

This is the example he gives:

He says that tetchuu refers to the case where the burasagari is played under the side star stone. It is obviously a common option in handicap games and the iron pillar imagery is presumably meant to recommend it strongly to the weaker player in such cases.

Some westerners use sagari for this example. It would be unusual to do so in Japanese. Other westerners use the terms tetchuu or iron pillar (or variants such as iron post) but apparently without being scrupulous in limiting it to the side star point.

Here are some Japanese forms of various words mentioned: