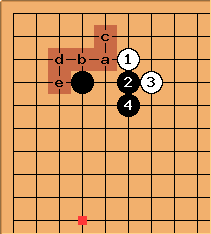 Its name comes from Black's plays in this diagram:

is a tsuke (attachment), and

The tsuke-nobi has been intensively studied in Chapter 3 of the book Sizi Pu by Guo Bailing, in which 178 variations are shown. It is available in English under the title "Four-Stone Games."

The tsuke-nobi itself is mostly popular among weaker players, but for stronger players it is still a good idea if Black wants to build thickness towards the left side, and does not mind giving White a position on the upper side. In other words, Black regards the left side as more important than the top. Often, but certainly not always, there will be a black stone around the marked point. After

In pro games it is now rare unless justified by the context: either Black getting a very efficient formation relative to the left side, or White getting an overconcentrated formation at the top.

Go further with the following links:

Tenuki next for White isn't a good idea at all. If, for whatever reason, White allows Black to play the next move here, Black should not hesitate to play a. The resulting shape is very good.