http://www.yomiuri.co.jp/dy/columns/0001/329.htm ) Rob Van Zeijst make the claim that the sequence from move 21 on involves a tesuji related to the 3-4 point low approach two-space high pincer press cut. I have trouble seeing this resemblence. Can anyone point it out? 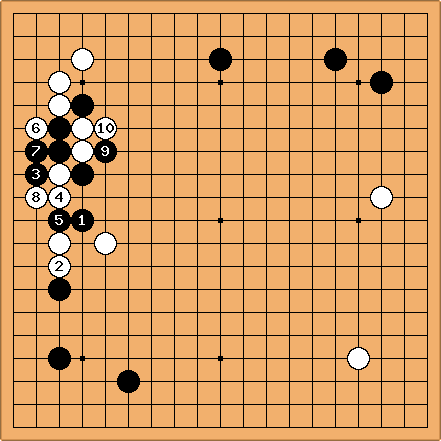 Rich: he means the driving tesuji; in a sense, a ladder that doesn't quite work, but in failing allows the player to build power. Compare the examples with the sequence up to 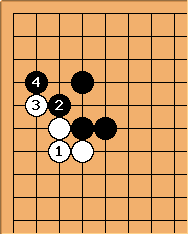 Thad: If anything Rich's comment makes things even fuzzier. From what I gather, a simple example of what the column was saying is:

In the tsuke-nobi joseki, if W were to connect ( or in most cases tenuki, extend down the side or approach from the top ). B should almost instinctively react with 2, making good shape. ( Some variations, for example 1 at 3 B should still respond at 2, but the atari does not make as good a shape for B. )

W ( at least in the games I play) often responds with 3 and 4 gives B really good shape.

( General caveat: While B has good shape he also has two cutting points. In this case B can handle the peeps either by connecting, or by playing stones which will capture the cutting stones. The two cutting points are shielded. But in many cases the shape is not as strong becasue the cuts are exposed. )

Often times when a corner has deviated from joseki, this basic pattern comes up: with A as an important point for both sides. ( Again a caveat: this point is not always a vital point. Either through reading or through a good feel for the shape, it is important to know if it is vital in a particular situation. ) It is a move that one should consider for both sides.

Of course this is a simple example of the phenomena.

Now back to the original question. Van Zeijst mentions that 1 is a terrific tesuji with shapes that are similar to: Where a presumably plays the role of 1 in the first diagram. Frankly I don't see the similarities.

Rich: Hi Thad. Sorry if I was not clear... but I really don't understand where you got the above tsuke-nobi information from the article. They are different, rely on different tesuji and different shape principles; one is about power building, the other about efficient eyeshape. 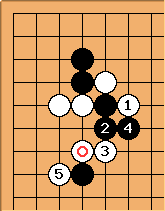 Alex: The marked White stone threatens this application of the driving tesuji if Black plays elsewhere. This is better than playing

as an atari at

, which is aji-keshi. I think that's the similarity that's implied.